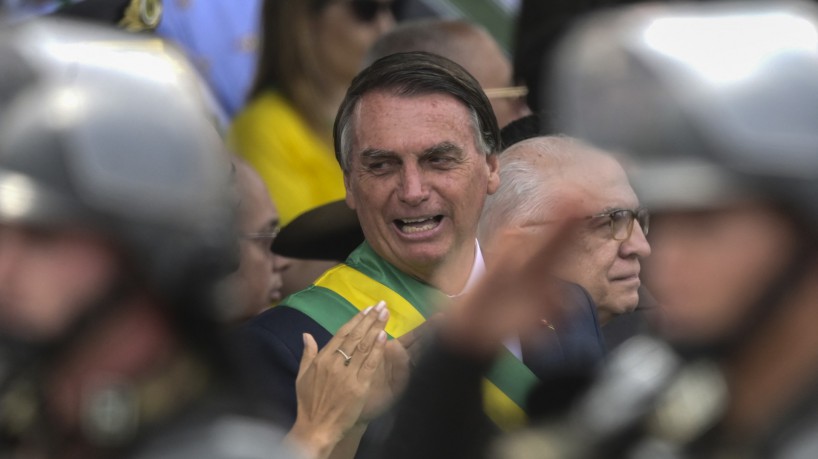 On September 7, Bolsonaro lied about corruption, pandemic and gasoline prices

President Jair Bolsonaro (PL), candidate for reelection, delivered a speech with an electoral bias this Wednesday, 7, during the commemoration of the Bicentennial of Independence, in Brasília. Alongside the first lady, Michelle Bolsonaro, the vice candidate, Braga Netto, and allied businessmen, the president lied when repeating the absence of corruption in his government and about the fight against the so-called “gender ideology”.

Check out the check of Bolsonaro’s lines and see what is false and true:

We gave a new life to this Esplanade of Ministries with competent, honorable and patriotic people. We started to change our Brazil. There’s a pandemic. We regret the deaths.

Inaccurate: During the Covid-19 pandemic in Brazil, the president accumulated statements in which he minimized the severity of the disease, even going so far as to mock the dead. In 2020, after being asked at the entrance of Palácio da Alvorada about the number of deaths from the new coronavirus, Bolsonaro said: “Hey, man, who talks about… I’m not a gravedigger, okay?”. The reporter then insisted on the question and Bolsonaro repeated: “I’m not a gravedigger, okay?”.

The president also said: “After the stab, it won’t be a little flu that will bring me down, no”. During a radio and TV address, he repeated: “Given my history as an athlete, if I were infected by the virus, I wouldn’t have to worry, I wouldn’t feel anything or I would be affected, at most, with a little flu or cold, as that well-known doctor said. , from that well-known television.”

At another point, Bolsonaro also said that Brazil has to “stop being a country of sissies” and face the Covid-19 pandemic with an “open chest”. “Everything is now a pandemic”, he complained during a speech at Palácio do Planalto, at a ceremony to launch a tourism program in 2020.

The president has already regretted the deaths, however, he said that they could have been avoided if the population had used ineffective medicine against Covid-19. “I regret all the deaths. I’m so sorry. Any death is a pain in the family. And we, from the beginning, the federal government had the courage to talk about early treatment”, said Bolsonaro, in 2021, when Brazil reached 500 deaths from Covid.

When it seemed that all would be lost for the world, behold, Brazil reappears with a thriving economy. With a gasoline among the cheapest in the world.

False: Data from the website Global Petrol Prices, responsible for showing the values ​​of fuels in the world, Brazil currently has the 36th cheapest gasoline among 168 countries analyzed. On September 5 of this year, gasoline cost, on average, US$ 1,019 per liter. The value exceeds what is charged in countries such as Bolivia (US$ 0.542), Colombia (US$ 0.557) and the United Arab Emirates (US$ 0.898), being below the world average of US$ 1.34.

With one of the most comprehensive social programs in the world, which is Auxílio Brasil. With the record in job creation.

Inaccurate: Despite the report of the General Registry of Employed and Unemployed (Caged) showing, at the end of August, that Brazil registered a volume of 42.2 million formal jobs, the largest in the survey’s historical series, it is not possible to guarantee a record in job creation. In January 2020, Caged began using other sources and capturing more data for surveys, allowing for more accurate accounting. Therefore, it is not possible to make a comparison with previous years. The register now compulsorily considers, for example, the registration of temporary workers, until then optional until 2020.

We are a largely Christian homeland.

True: Datafolha poll released in January 2022 reveals that Christians are part of a majority of Brazilians. They are 51% Catholic and 26% Evangelical, among other denominations of Christianity.

… does not want legalization of drugs [população brasileira]…

It is true that the Brazilian population is resistant to the release of drugs. A 2019 survey by the Ipsos institute, which evaluated 29 countries, shows that only 24% are in favor of the legal recreational use of marijuana, which reveals a resistance from Brazilians when it comes to drug release. In 2014, the Senate released a study in which only 9% of Brazilians appear in favor of legalizing marijuana for any purpose.

“… does not want legalization of abortion,…”

True: The majority of the Brazilian population is against the legalization of abortion. This is what two surveys published in May of this year show. PodeData pointed out that 59% of respondents are against the voluntary termination of pregnancy. Datafolha data say that 39% defend not changing the current legislation, which provides for abortion only in cases of rape, risk to the mother and anencephaly of the fetus. Another 32% said the measure should be banned in any case. The survey also revealed that 18% are in favor of abortion in more situations than those provided for by law. Another 8% agree with terminating the pregnancy in any situation.

“…which does not admit gender ideology.”

In addition, a Datafolha survey commissioned by the Center for Research and Studies in Education, Culture and Community Action (Cenpec) and Ação Educativa, published in July 2022, says that most Brazilians believe that gender and sexuality issues should be debated. in the classroom.

Asked whether schools should promote the right of people to freely experience their sexuality, whether they are heterosexual or LGBTQIA+, 66% said they fully agree with the statement and 15% partially agree.

Among those interviewed, 71% said they agreed that the school is better prepared than parents to explain topics such as sexuality and puberty. The survey was carried out with 2,090 Brazilians, aged 16 years or older, in 130 municipalities in the country, from March 8 to 15 this year.

Previous Arana, from Atltico, suffers serious injury and is out of the World Cup
Next Ana de Armas gets emotional with 14 minutes of applause for ‘Blonde’

An AirTag, from Apple, helped the French police to find the luxury bags of a …