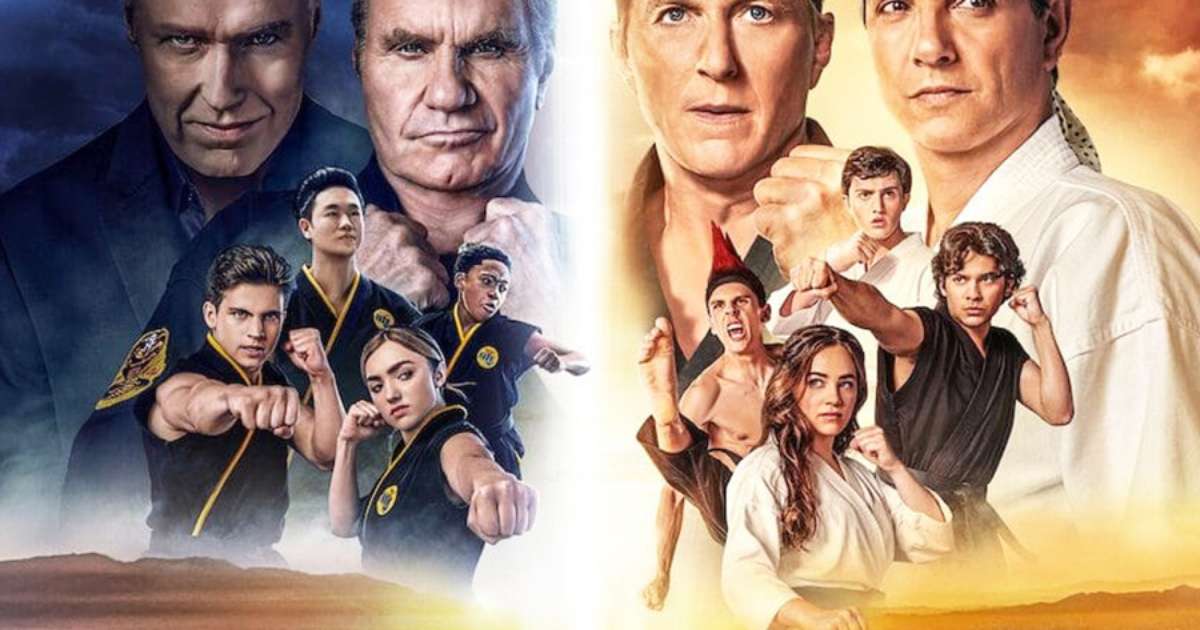 Check out the 10 premieres of the most prominent series in the streaming schedule below.

Fueled by 1980s nostalgia, “Cobra Kai” was created by Josh Heald, Jon Hurwitz and Hayden Schlossberg (the latter two from “American Pie”) and follows classic “Karate Kid” characters for over 30 years. after the events of the original franchise. In addition to the aforementioned, the list of classic characters also includes Lucille (Randee Heller) and Chozen (Yuji Okumoto), from the first and second films.

The horror comes to season 3 showing that the protagonists are far from getting rid of the threats that haunt them. Produced by Robert and Michelle King (creators of “The Good Wife” and “The Good Fight”), “Evil” follows a Catholic Church employee in charge of investigating possessions, who teams up with a forensic psychologist to distinguish real cases from outbreaks. psychotics. With each episode, they are confronted with supernatural cases, demons and temptations.

Mike Colter (the “Luke Cage”) lives the man of the Church, the Dutch actress Katja Herbers (the Emily from “Westworld”) plays the psychologist and the cast also highlights Aasif Mandvi (“The Brink”) as a technical investigator of the phenomena, in addition to Michael Emerson (“Person of Interest”) as an agent of evil. The series has already been renewed for a 4th season.

Season 3 puts the idealism of Courtney Whitmore (Brec Bassinger), aka Stargirl, to the test. After heroes and villains unite to defeat the threat of Eclipso, everyone tries to live together in peace, but those who should be heroes are not very convinced of the good behavior of said villains. To complicate matters further, the two most evil teenagers from the Injustice Society families now want to join the Justice Society team. And Starman (Joel McHale), who was supposedly dead, not only survived the villains’ attack but moved into Stargirl’s family home, putting Courteney’s future as a hero in doubt, as she inherited her powers from the ” death” of him.

The series creator is Geoff Johns, who conceived “Stargirl” in the DC Comics.

The British series starring Rosa Salazar (“Alita: Battle Angel”) and Gavin Drea (“Vikings: Valhalla”) combines romantic comedy with mystery thriller. The two play Katie and Stefan, who fall in love at a wedding and begin an affair, despite Katie already having a fiancé. So when it comes time for Katie’s wedding, instead of the party ending with a happily ever after, it ends up with eight people poisoned at the dinner table, including the groom. But she escapes unharmed.

For the police, Stefan, the lover, was responsible. Stefan, on the other hand, believes that Katie is to blame. While trying to prove their innocence and discover the identity of the real culprit, the lovers discover that they are still targets of the killer and decide to put their suspicions aside to ally.

Created by Oliver Lyttelton (“Cheaters”), the production has eight episodes.

Michelle Monaghan (Mission: Impossible franchise) stars in the dual role thriller as two identical twins who have secretly switched places for years. But their secrets start to fall apart when one of them goes missing. The plot was developed by Vanessa Gazy, creator of the Australian teen mystery “Eden”, which also involves mysterious disappearance and is available on Globoplay.

This variation of “Narcos” made in Korea follows a businessman coerced into taking part in a secret government mission to apprehend a Korean drug lord, posing as a pastor and operating in South America. Like the Latin plots of “Narcos”, the story is based on true crimes.

The series is based on the 1980 film of the same name about a sex worker who becomes a murder suspect. It features Jon Bernthal (Marvel’s “Punisher”) as Julian Kaye, a character that was played by then heartthrob Richard Gere 40 years ago, and begins by recreating scenes from the film written and directed by Paul Schrader, before taking a 15-year leap to tell the continuation of the story, after the protagonist gets out of prison for the crime in which he was falsely implicated.

As he seeks to unravel the conspiracy that landed him in prison, Julian tries to reclaim his place in the sex industry, which has changed a lot in recent years, getting involved with ravenous new women, while trying to reconnect with his old flame, his ex-girlfriend. client Michelle – in the series, played by Gretchen Mol (“Boardwalk Empire”).

The film adaptation was developed by screenwriter-producer David Hollander, one of the main writers of “Ray Donovan”, who had already dealt with the sex industry in the feature “Maximum Censorship” (2000). But he was fired during filming, after a complaint and investigation of misbehavior on set, leaving the showrunner job in the hands of Nikki Toscano – who worked on “Revenge”, “Bates Motel” and the recent “The Offer”. This confusion may have hurt the production, because American critics found it very very bad – only 14% approval on Rotten Tomatoes.

The spinoff series from Pixar’s “Cars” franchise follows Lightning McQueen and her best friend Mater on a trip through the countryside to meet up with Mater’s sister. But along the way, they experience many unexpected adventures, with new characters and references to “Mad Max: Fury Road”.

Actors Owen Wilson and Larry the Cable Guy, who voiced the two central characters in the three films in the franchise, return to reprise their roles in the animated series, in the English version. The direction is shared by Steve Purcell (writer-director of “Brave”), Bobby Podesta (animator of “Cars”) and Brian Fee (writer-director of “Cars 3”).

The animation follows a family of janitors who live and work in Central Park, New York. In the plot, the Tillermans fight to save the New York park – and the world – from sinister real estate plans. And, on top of that, they still sing several musical numbers.

The production was developed by Loren Bouchard (creator of “Bob’s Burgers”), Nora Smith (writer of “Bob’s Burgers”) and actor Josh Gad (LeFou of “Beauty and the Beast”). And Gad is also one of the main voices, along with Tituss Burgess (“Unbreakable Kimmy Schmidt”), Stanley Tucci (“The Hunger Games”), Daveed Diggs (“Express of Tomorrow”), Leslie Odom Jr. (“A Night in Miami”), Kathryn Hahn (“WandaVision”), Emmy Raver-Lampman (“The Umbrella Academy”) and Kristen Bell (“The Good Place”) – who switched characters after season 1, asking to to be replaced by a black actress in the role of the teenage daughter of the central family.

Emmy winner for Outstanding US Animated Series, the series created by Justin Roiland and Dan Harmon (also creator of “Community”) follows mad scientist Rick and his grandson Morty on adventures through time, space and other dimensions that end up having big impact on reality – otherwise known as pop culture.

After the explosive events of last season, the new episodes will follow Dr. Rick in the Multiverse of Madness, as the scientist tries to stop an evil version of himself from creating more chaos in reality. All this while her family deals with invasions from space, attacks from other dimensions and the occasional end of the world.

Previous Negotiated, Pedrinho says goodbye to America: ‘Even far away, I’ll be with you’
Next Rony sends a message after elimination in Libertadores