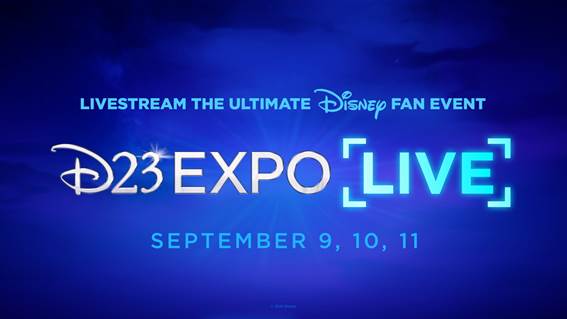 The official fan club of disney is proud to announce the official schedule for the 2022 D23 live stream that will take place from September 9th to 11th. The D23 Expo [AO VIVO] will bring incredible content from the biggest event for Disney fans around the world, including the Disney Legends Awards Ceremony, Mousequerade and Celebrity Trivia, as well as panels from Disney Parks, Experiences and Products; Disney Branded Television; Disney Games and Marvel Games; National Geographic; and much more.

Every day, D23 will offer eight hours of non-stop surprises, including unmissable D23 Expo panels with big stars, incredible entertainment and content previews. Among these panels, exclusive content will be presented that will captivate the public, including:

· Appearances by actors, actresses and those responsible for creating the series and films loved by the public;

· A preview of new consumer products;

· Tours in unique experiences in the exhibition hall;

· An exclusive look at the latest Disney Games releases;

· Daily summaries of D23 Expo highlights by the presenters of the D23 Inside Disney podcast;

Disney fans will be able to attend the D23 Expo [AO VIVO] on D23Expo.com/live, D23.com, and on D23’s YouTube, Facebook, Twitter, and Twitch accounts. In Brazil, Disney Studios, Disney+, Marvel and Star Wars accounts will provide exclusive coverage with all the news from the Expo.

Below, we present the highlights of the D23 Expo [AO VIVO] (all times correspond to Pacific time):

· Disney100 kicks off the D23 Expo with an epic presentation, including the Disney Legends Awards Ceremony with Disney CEO Bob Chapek. Once again, the event will honor the artists and visionaries who have made significant contributions to the Disney legacy. This year, the following will be honored: Anthony Anderson, Kristen Bell, Chadwick Boseman, Patrick Dempsey, Jonathan Groff, Josh Gad, Idina Menzel, Ellen Pompeo, Tracee Ellis Ross, among many others.

13:00 – Presentation of the Disney and Marvel games

· Tune in to Disney & Marvel GAMES SHOWCASE for announcements, previews and news of some of the new and upcoming games from Disney, Pixar, Marvel, Lucasfilm and 20th Century Studios.

· To celebrate the powerful soundtrack of Marvel stories, Variety magazine critic Jon Burlingame will host the Disney For Scores live podcast. Jon will bring the format of the popular Disney For Scores podcast to life by interviewing the writers of some of Marvel’s favorite series and movies. By listening to the podcast, the public will be able to know the secrets behind the incredible track that helps build the Marvel Universe.

· New Disney Legends have an eye-opening conversation about their legendary careers.

· Disney’s biggest costume contest will be back at the D23 Expo! Presenter Nina West and a guest jury made up of Yvette Nicole Brown, Ashley Eckstein and Ally Maki will participate in this contest to reveal the most extraordinary creations and the most magical makeup in the universe of Disney fans. New this year will be that anyone watching the contest, whether at the D23 Expo or from home, will be able to vote for their “Fan Favorite” and find out who wins the contest.

10:30 am – Talking to National Geographic Veterinarians

· Emmy®-winning animated series Bob’s Burgers joins the D23 Expo following the recent critically acclaimed debut of Bob’s Burgers: The Movie. The cast and creators will share the latest news and entertain the audience during a lively panel discussion.

· An opportunity to celebrate 60 spectacular, sensational and electrifying years of Spider-Man! From his humble debut in Amazing Fantasy #15 in 1962, Spider-Man has climbed the walls to international stardom. Spider-Man Executive Editor Nick Lowe and Editor-in-Chief CB Cebulski will trace the history of Spider-Man comics over its six decades. An unmissable panel in which captivating trivia about the arachnid hero will be shared.

· An exclusive presentation from Disney Branded Television that highlights a legacy of storytelling excellence and includes talent appearances, performances and never-before-seen previews of original content for Disney+, Disney Channel and Disney Junior.

· Nina West (RuPaul’s Drag Race, Hairspray on Tour, D23 Mousequerade 2022) will take famous contestants and members of the public to revel in a kaleidoscopic world of extraordinary Disney games, including Q&A, fitness challenges and more!

· Producers from the Walt Disney Archives, Semmel Exhibitions and Studio TK reveal unmissable details about the new exhibition celebrating the 100th anniversary of the Disney Wonder, scheduled to open in February 2023 at the Franklin Institute in Philadelphia, United States.

10:30 am – An Unlimited Future: Disney Parks, Experiences and Products

· Disney Parks, Experiences and Products President Josh D’Amaro will discuss Disney’s unlimited future. With announcements and updates on the magic happening around the world in the parks, on the high seas, at home and beyond, audiences will see what’s behind Disney Imagineers’ big dreams and enjoy this special presentation packed with exciting surprises. and news.

· For 70 years, Walt Disney Imagineering has combined imagination with cutting-edge technology to create revolutionary experiences. This panel will allow the public to get to know Imagineers of the past and present by analyzing the core elements of creation and innovation that make dreams come true for visitors from around the world.

15:45 – Let’s explore the world with the new generation of National Geographic!

· Nina West (RuPaul’s Drag Race, Hairspray on Tour, D23 Mousequerade 2022) will take famous contestants and members of the public to revel in a kaleidoscopic world of extraordinary Disney games!

The schedule and talent participation are subject to change.

Tickets for D23 are sold out. For more information, visit D23Expo.com.