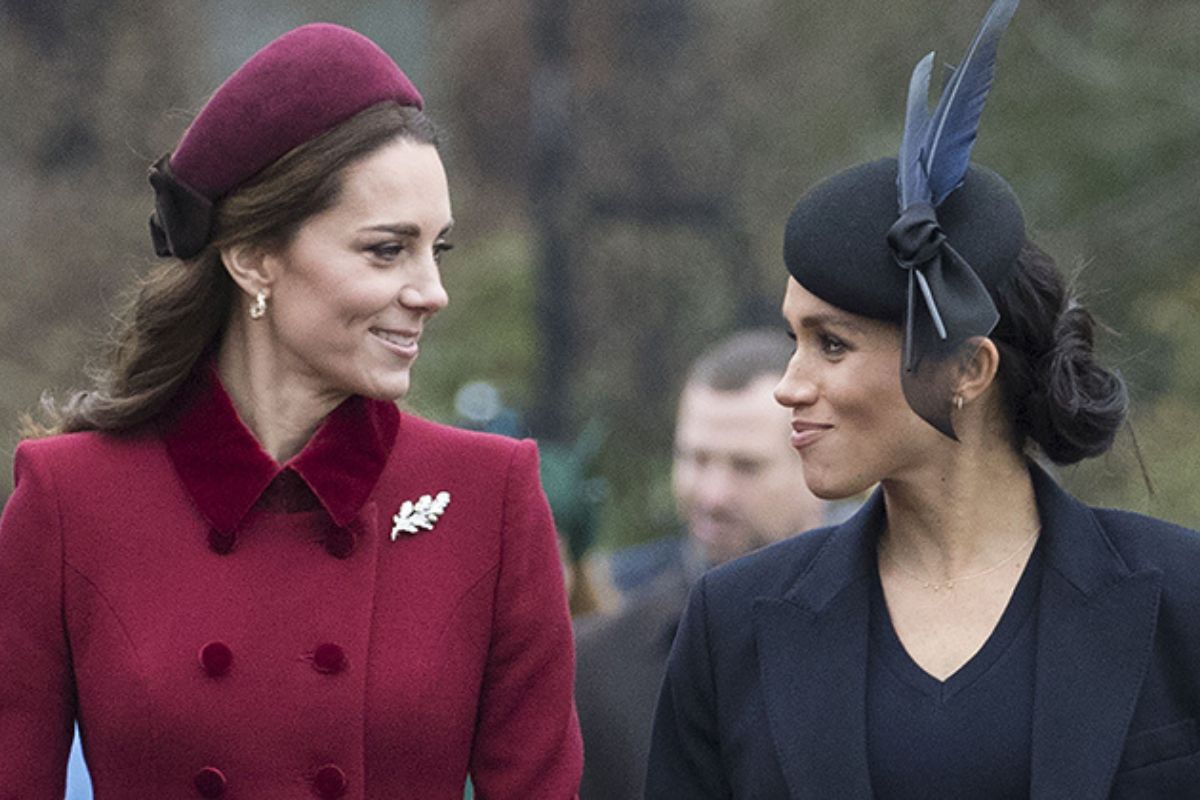 Kate and Meghan didn’t go to Balmoral. Know why!

Queen Elizabeth II, after 70 years of reign, leaving a great legacy worldwide. Elizabeth II’s doctors called for the family to be reunited as a matter of urgency. However, Kate Middleton and Meghan Markle were not present at Balmoral Castle.

William and Kate’s children – George, Charlotte and Louis, 9, 7 and 4 years old respectively, were having their first day of school and for this reason, when William went to the castle where the Queen was, the Duchess stayed at the Palace. from Kensington, and picked up the little ones from the Lambrook School. It is worth remembering that Kate was photographed with a worrying face before the terrible news.

The Duchess of Sussex, Meghan Markle, stayed in London, while Harry, unfortunately, arrived an hour and a half after his grandmother’s death, unable to say goodbye to Elizabeth II. It remains to be seen whether the couple will stay in the UK to attend the Queen’s farewell ceremonies.

Elizabeth II, born Elizabeth Alexandra Mary, was born on April 21, 1926, in Mayfair, an area of ​​central London, in the east corner of Hyde Park, in the city of Westminster, England. She was the first child of the Duke and Duchess of York, who would later become King George VI and Queen Elizabeth. Her family called her “Lilibet”. Her only sister, Margaret (1930 – 2002), was born four years later. The two were cared for by housekeeper Marion Crawford, who in 1950 published a biography of Elizabeth and Margaret’s childhood.

In it, accounts of the queen’s passion for horses, dogs, her methodical disposition and attitude of responsibility. Her father ascended the throne in 1936 after her brother King Edward VIII abdicated the throne, making Princess Elizabeth the presumptive heir to the British throne. Elizabeth II was educated largely at home. She began to hold public office during the Second World War.

In November 1947, at the age of 21, Elizabeth II married Philip Mountbatten, a former prince of Greece and Denmark. They were second and third cousins ​​on the part of King Christian IX of Denmark and Queen Victoria respectively. It is said that at the age of 13 the monarch was already in love with Filipe. The two exchanged letters and so the approach became even closer. The engagement was announced on July 9 of that year.

Read+: Doctors of the monarch summon the family for conversation

The marriage took place under controversy. Philip didn’t have a good financial situation there. He was a foreigner, having only served in the British Royal Navy during WWII and had sisters married to German nobles with Nazi connections. In the biography, the housekeeper described Philip. “Some of the king’s advisers didn’t think he was good enough for her. He was a prince without a home or kingdom. Some of the newspapers played long, loud songs about Philip’s foreign origins. However, Elizabeth later told biographer Tim Heald that the prince was “an English gentleman”. They had four children: Charles, Prince of Wales; Anne, Princess Royal; Prince Andrew, Duke of York; and Prince Edward, Earl of Wessex. The union lasted 73 years after Philip’s death in 2021.

During her grandfather’s reign, Elizabeth was third in line to the throne after her uncle, Edward, Prince of Wales and her father. At the time, she was not expected to become queen, as the Prince of Wales was still young and many assumed he would marry and have children. George V died in 1936 and her uncle ascended as Edward VIII, with her second in line to her father.

Read+: Remarkable images from the life of the Monarch

Later the same year, Edward abdicated after his marriage proposal to Wallis Simpson caused a constitutional crisis. Thus, the Duke of York became king under the name of George VI and Elizabeth became the heir presumptive – a person who, by appointment or via close kinship, is entitled to a throne or title of nobility. If her parents had had a son, she would have lost her position as first in succession as her brother would be heir apparent and would be above her in the line of succession.

On her father’s death in February 1952, Elizabeth II became queen regnant of seven independent countries. At this time, the monarch was only 25 years old. She has experienced major political changes around the world, such as the troubles in Northern Ireland, the devolution in the UK, the decolonization of Africa and the UK’s accession to the European Communities and withdrawal from the European Union.

The heart took place on June 2, 1953. The ceremony took place at Westminster Abbey and was televised for the first time, with the exception of the anointing and communion portion. Throughout the time he inherited the throne, the number of his kingdoms varied over time as territories gained independence and some kingdoms became republics. Elizabeth was still the first female sovereign monarch of the House of Windsor, Supreme Governor of the Church of England and Supreme Commander of the Armed Forces of the United Kingdom.

It wasn’t just what Elizabeth II did or didn’t do that mattered. The births and marriages of her children and grandchildren also became the spotlight of the Queen’s personal life. The investiture of the Prince of Wales and the celebrations of milestones such as his Silver Jubilees in 1977, Gold in 2002 and Diamond in 2012 have likewise been closely watched around the world.

The United Kingdom entered World War II in 1939. At the time, Lord Douglas Hogg, 1st Viscount Hailsham, suggested that Elizabeth and Margaret be evacuated to Canada, but this was rejected by the Queen, who declared: “Children are not go without me. I will not leave without the King. And the King will never depart.” The following year, the 14-year-old monarch made her first radio broadcast during Children’s Hour from the BBC, addressing other children who had been evacuated from the cities.

“We are trying to do everything we can to help our brave sailors, soldiers and airmen, and we are also trying to bear our share of the danger and sadness of war. We know, each one of us, that in the end everything will be fine,” said Elizabeth, still a teenager. Between the ages of 16 and 18, the monarch was already preparing in case her father became disabled.

In 1947, aged 21, Elizabeth made her first international trip with her parents to southern Africa. In a broadcast she told the world: “I declare before you that my whole life, whether long or short, will be dedicated to your service and the service of our great imperial family, to which we all belong.”

In 1980, six weeks before the wedding of the Prince of Wales and Lady Di, Elizabeth was shot six times as she rode along a major London avenue with her horse. Later, the police discovered that the shots were blanks. Marcus Sarjeant, the 17-year-old attacker, was sentenced to five years in prison but was released after three. The decade also marked the heightened media interest in the Queen’s personal life. Sensationalist stories were what they had the most, but for the most part, they were false.

On December 25, 2021, a 19-year-old man burst into the Royal Palace masked with a hood holding a medieval weapon, saying he would try to kill the queen with the aim of revenge. The boy was caught and sent to a psychiatric hospital, luckily, he didn’t get to meet Elizabeth. According to The Mirror, the young man went by the name of Jaswant Singh Chail.

On October 20, 2021, Queen Elizabeth II was admitted to a hospital for “preliminary investigations”, according to Buckingham Palace. The hospitalization was “lightning”, because, the next day, she was discharged and returned home.

At home, the monarch did not participate in royal events without having a companion. According to Page Six, the Palace has made available another royal to be by her side at upcoming events as a form of preventative measure in case she feels unwell.

According to the Telegraph, at the age of 95 at the time, Queen Elizabeth II began to have lighter tasks after being discharged from hospital, thus ensuring that her appointments always had a company for any health-related needs. And it is also a guarantee to the people that, even if the Queen cannot participate in some engagement, another royal member will be in her place.

Previous Atlético-MG in the nets: Arana posts pictures of recovery from injury; Hulk travels and watches his son’s goal in SP | athletic-mg
Next Royal Marathon: 9 movies and 4 series about Queen Elizabeth II and the British royal family