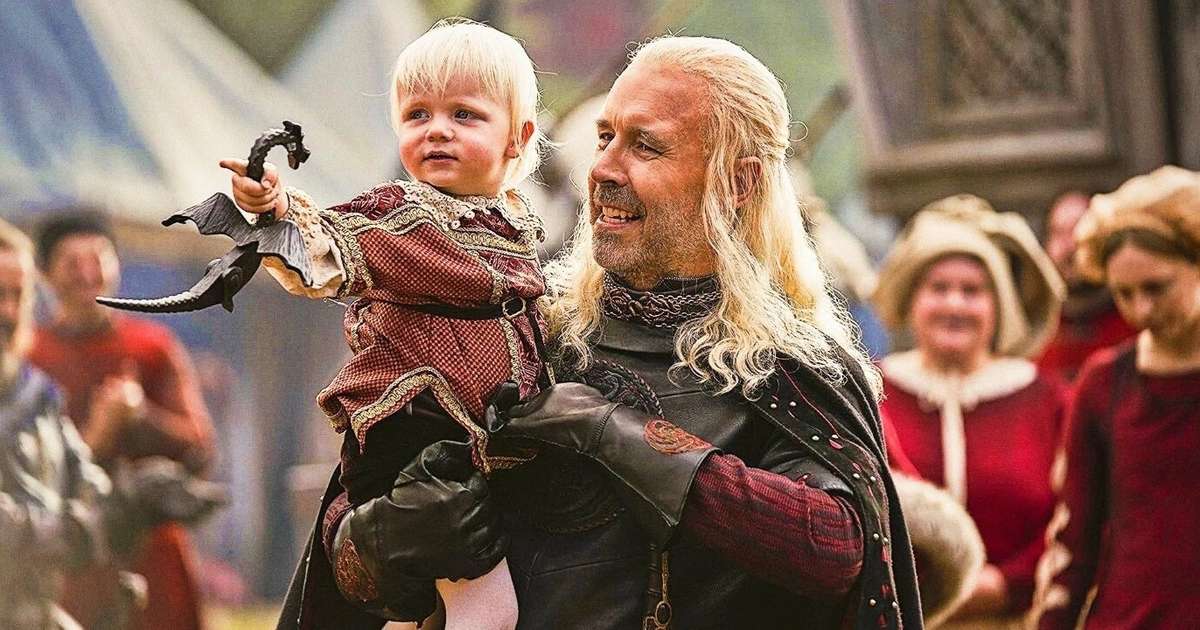 THE NEW YORK TIMES – Comparisons between ‘House of the Dragon’ gives HBO and Amazon’s ‘Lord of the Rings: The Rings of Power’ – both epic new fantasies, both prequel series, both with huge budgets and ready-made fan bases – were probably inevitable. And indeed, the internet has already been more than happy to oblige.

But should we compare them? Possibly not.

The author of Thrones, George RR Martin – whose work was heavily influenced by the original author of Rings, JRR Tolkien – wants only peace in the kingdom. “It’s not a death fight or anything,” he told The Hollywood Reporter. “We don’t have to be in parentheses.”

Still, few seem able to resist the urge. And what are we made of, Valyrian stone?

However, rather than comparing industry statistics – rankings, budgets and so on – let’s look at where the two programs overlap. Which one has the coolest swords? The best dragons? The most formidable heroine? It is true that initial observations are based on the first few episodes only (three so far for dragon; two for rings). But we’ve seen enough to start the discussion.

It’s not entirely fair to compare Tolkien The martin, who is often called “the American Tolkien”. The two authors are not in competition. Martin draws inspiration from a lot of what Tolkien did, especially in the areas of magic and world building; but he also expanded on Tolkien’s accomplishments. Tolkien sold more books than Martin (both sold tens of millions), but Tolkien’s has been around much longer.

A better comparison might be the earlier adaptations of his work: Game of Thrones, by HBOto which Dragon is a prequel, versus the film versions of Peter Jackson from ‘The Lord of the Rings’ and ‘The Hobbit’.

It could be said that the early seasons of ‘Game of Thrones’ were in some ways comparable to the first three (and much-loved) Jackson films, while the derided later seasons of Thrones more closely resembled the polarizing Hobbit films. Each series got off to a great start, but each one tested viewers’ patience. Tolkien fans are already finding things to complain about with the new series, but they’ve had a lot more time to get over the Hobbit movies. If the monster ratings seen so far for Dragon are any indication, Thrones fans seem prepared to forgive (if not forget) for now. But it’s still early days, the fan reaction to the end of Thrones was really bitter, and the franchise still has a lot of ground to recover.

As prequels, Rings of Power has another advantage because some of its characters are immortal. The trick, of course, is that the new actors need to live up to those playing previous incarnations, some of whom were widely loved. Morfydd Clarkas a young adventurer Galadriel in Rings (played by Cate Blanchett in the films) achieves this very well.

Dragon could have followed a similar path if showrunners were willing to revisit long-lived Thrones characters like Melisandre (Carice van Houten) or the children of the forest. But that would require fitting these characters into the story in places where they didn’t really fit.

Instead, Dragon implicitly asks viewers to identify Rhaenyra (Milly Alcock) with Daenerys (Emilia Clarke) and therefore support his claim to the throne. As for the causes, this isn’t as noble as Galadriel’s quest to extinguish the ultimate evil, or even Dany’s initial struggle with oppression. Rhaenyra wants only her birthright; and maybe there’s something heroic about fighting the patriarchy to get it, but so far she’s not Galadriel, even if the blonde wigs make the Targaryens look like elves.

It is said that the sword makes the man – or the woman, or the elf. And sometimes a legendary sword can do more to fuel fear and awe than the individual wielding it.

In The Rings of Power, we will presumably see some of these historic blades – Isildur’s (Maxim Baldry) sword, for example, which is known as Narsil and carries the weight of fate. Meanwhile, what about the broken black dagger that Theo (Tyroe Muhafidin) secretly guards? It’s a weapon that seems capable of reforging itself and drinking blood as well. It resembles the Anglachel sword, also called the Gurthang, and that’s not a good thing.

In House of the Dragon, we are in a Golden Age of legendary Valyrian weaponry. King Viserys (Paddy Considine) holds the mighty sword of kings, Blackfyre, when he wants to exercise authority, and holds a familiar dagger when he wants to convey prophecies. (Given the special properties of that dagger’s Valyrian steel, it also has fate written all over it.) Daemon (Matt Smith), meanwhile, uses the finer Dark Sister to pave his way to glory.

Then there’s the Iron Throne, which is made of countless swords and can easily topple a king with a well-placed slash. Legend has it that this is how the throne “rejects” those who are not worthy to rule.

A parallel to Valyrian steel in Tolkien’s world is mithril, the rare and precious metal found only in Khazad-dum and Númenor – both places visited in Rings of Power.” Mithril is said to be stronger than steel, but also lighter – which raises the obvious question: why has no one thought of making a mithril sword?

Advantage: House of the Dragon

In the beginning – in The Rings of Power, at least – there were the Two Trees of Valinor, growing side by side in a mixed glow, until the Dark Lord Morgoth poisoned them. Then, making matters worse, Morgoth stole the Silmarils, three jewels containing the pristine light of those two now-vanished trees. We also learn that a gift seedling continues to flourish even in the subterranean depths of Khazad-dum. As? Love? Magic? (Is there any difference?) There are also other significant trees, some of them symbolizing friendship between different species. (Look for one of these if we go to the capital of Númenor.)

Until now, the white weirwoods in House of the Dragon are little more than a backdrop, a source of soothing shade in the sacred grove. But it seems likely that these trees are being used by someone as some sort of Westerosi surveillance system. (We know there were a number of Three-Eyed Ravens and greenseers keeping watch.) We probably won’t learn much about that this season.

Dragons are the ultimate weapons of war. in the prologue of The Rings of Powerwe see the evil Morgoth make pioneering use of winged beasts in battle.

One of his mounts appears to be Ancalagon the Black, an obvious model for another familiar giant, Balerion the Black Dread, whose preserved skull is an object of reverence in House of the Dragon. Tolkien’s dragons are not pets; taking them for a walk would be inadvisable. And they will play a more serious role in the story once the dwarves get their power gems.

But to resolve the central issue between the two franchises, which dragons are better? We know from the loquacious Smaug, in the 2013 film The Hobbit: The Desolation of Smaug, that Tolkien’s dragons are conscientious and considerate. One by one, they have serious intellectual assets; but, as a group, their meager numbers in Middle-earth during this Second Age are no match for the fire-breathing horde in House of the Dragon.

Rhaenyra’s Syrax and Daemon’s Caraxes are just the first of these beasts to be introduced to the show – there’s a whole dragon pit more of them we haven’t seen yet.

Advantage: House of the Dragon,

Given that Tolkien was in fact a linguist, who created his own Elvish language (Quenya, it is called), The Rings of Power starts with a distinct advantage over House of the Dragon in this category.

Martin (for the books) and language creator David J. Peterson (for Dragon) have made valiant efforts to achieve something close to what Tolkien did, most notably with High Valyrian, the mother tongue of Targaryen rulers. If we were to judge each show solely by the artistry of their languages, Tolkien’s Quenya would surely win.

But The Rings of Power squanders this advantage by barely using Quenya when the Elves talk to each other, or Khuzdul among the Dwarves, at least in the first two episodes. We hear Elrond (Robert Aramayo) mutter a few words in Elvish to himself as he’s writing something, but he switches to the common tongue seconds later.

On the other hand, House of the Dragon uses High Valyrian to establish a relationship between an uncle and Targaryen niece, and the actors speak so fluently that the bond feels real.

Both series are based on preexisting material. For House of the Dragonis the imaginary story of Martin, the book Fire & Blood. For The Rings of Powerare mainly appendices of Lord of the Ringswhich are essentially sketches of history.

Both shows had to invent a lot to fill in the narrative gaps, and here House of the Dragon benefits from Martin’s direct involvement as one of the show’s creators. Furthermore, the writers of House of the Dragon seem much more aware of how to use lines and cutscenes to stir up the colder discussion and fire up the old meme factory thrones again. Rhaenyra’s “I never play with cake” was a little tense, but people are still talking about the C-section murder from the first episode.

The Rings of Power, so far, isn’t putting meat back on the menu, guys – and it isn’t serving the second breakfast either. But we know that Daemon Targaryen will always give us the GIFs.

Advantage: House of the Dragon

Previous Full breakfast reduces hunger but does not affect weight loss
Next Botox: US agency releases use of competing toxin – 09/09/2022 – Equilibrium

🇧🇷 Brie Larson at the premiere of the docuseries Crescendo (Photo: Getty) If a movie …