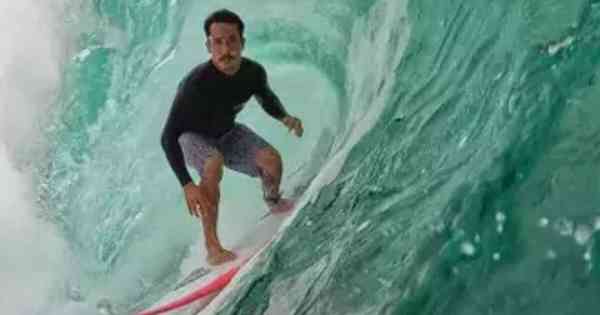 Surfer in a coma: how tooth infection can lead to death – Health

Brazilian surfer Jnior Enomoto, known as “Japa”, fell into a coma due to a health problem initially caused by a dental infection. Currently, the surfer is hospitalized in Bali, Indonesia, with a diagnosis of lung infection caused by a bacterium.

According to dental surgeon Larissa Valadares, dental infection is characterized by the infectious process that spreads to other tissues, such as the sinuses and fascial spaces (areas delimited by fascia and muscles) of the head and neck region, from of a dental focus and may occasionally require hospital care.

In the case of the surfer, the doctors found a cavity in his left lung and the pulmonologist said that the Brazilian might need surgery.

“Usually, this infection occurs due to a carious lesion or gingival inflammation that was not treated in the initial stages, or after the extraction of a tooth that was infected without pre-surgical preventive measures such as antibiotic therapy,” explains Valadares.

Dental infections have a periodontal or periapical origin and have symptoms such as pain, swelling and a “grown tooth” sensation. The infection of periodontal origin, according to the specialist, is one in which the bacteria present in the gingival tissues spread and reach the alveolar bone (thin layer that surrounds the root of the teeth) through their exotoxins.

The periapical is the main cause of odontogenic infection: “in this case, the carious lesion spreads through the internal tissues of the tooth, reaching the peripice (tissue complex that surrounds the apical portion of the root of a tooth: cementum, periodontal ligament and alveolar bone). ). Upon reaching this region, the infection, when untreated, will spread to other tissues”, says the dentist.

How to treat the infection?

Valadares explains that the most important aspects in the treatment of odontogenic infections are the elimination of the cause (tooth extraction or endodontic treatment) and surgical drainage of the abscess. “Treatment will depend on the type and severity of the infection and should always be associated with antibiotic therapy” he adds.

The dentist draws attention to the fact that, if treatment is not carried out in the early stages, the infection can spread beyond the teeth, reaching the alveolar processes, the deep tissues of the face, oral cavity, head and neck. . “In more severe cases, the infection can progress to endocarditis, septicemia and even death”, she points out.

The community near ‘Japa’ mobilized and organized a crowdfunding to collect donations for medical procedures.

* Internship under the supervision of the editor Ellen Cristie.

Previous Flamengo: Leader asks for Libertadores final in the USA: ‘Cheaper’
Next 8 Movies and TV Shows We Hope to Learn More About at D23 2022