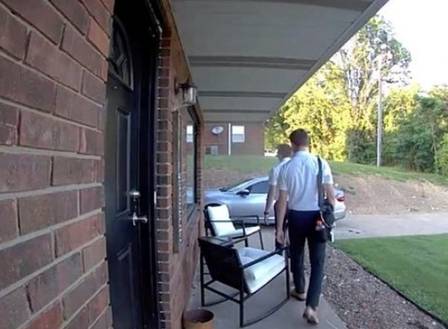 ‘The gayest place in town’

One couple of Mormon missionaries were bothered by a doormat at the entrance of a house in Indiana (USA) and gave up preaching to the residents. On the tapestry was a message: “The gayest place in town”.

The house belongs to Jamie Foust, 28, and his wife Melissa, 32, who bought the rainbow doormat in June because they thought it was funny.

Two months later, on August 23, two Mormon missionaries were caught on the home’s security camera approaching the house, presumably in an attempt to convert the female couple to their customs.

Young people can be seen arriving at the door, ready to preach, when one of them looks down and reads the word “gayest” out loud.

The two are heard saying “no” vehemently and quickly moving away from the property. The frustrated approach lasts a few seconds.

Jamie said the video left her “crying with laughter”, and she quickly showed it to her wife before posting the footage on TikTok, where she amassed over 7.5 million views and more than 922 thousand likestold the NY Post. Watch below:

“I hope they leave us alone now”she said, calling the couple’s $10 doormat the “biggest investment”.

“As an ex-Mormon queer and trans, it brings me so much joy”commented one netizen.

Others, in smaller numbers, defended the missionaries. One person argued that so-called “elders” are “generally between 18 and 22 years old” and that “probably walked away out of respect for you and how you want to live life”.

Previous iOS 16 will know if the user is using fake AirPods or not
Next Disney and Pixar announce movie and streaming releases. Check out!