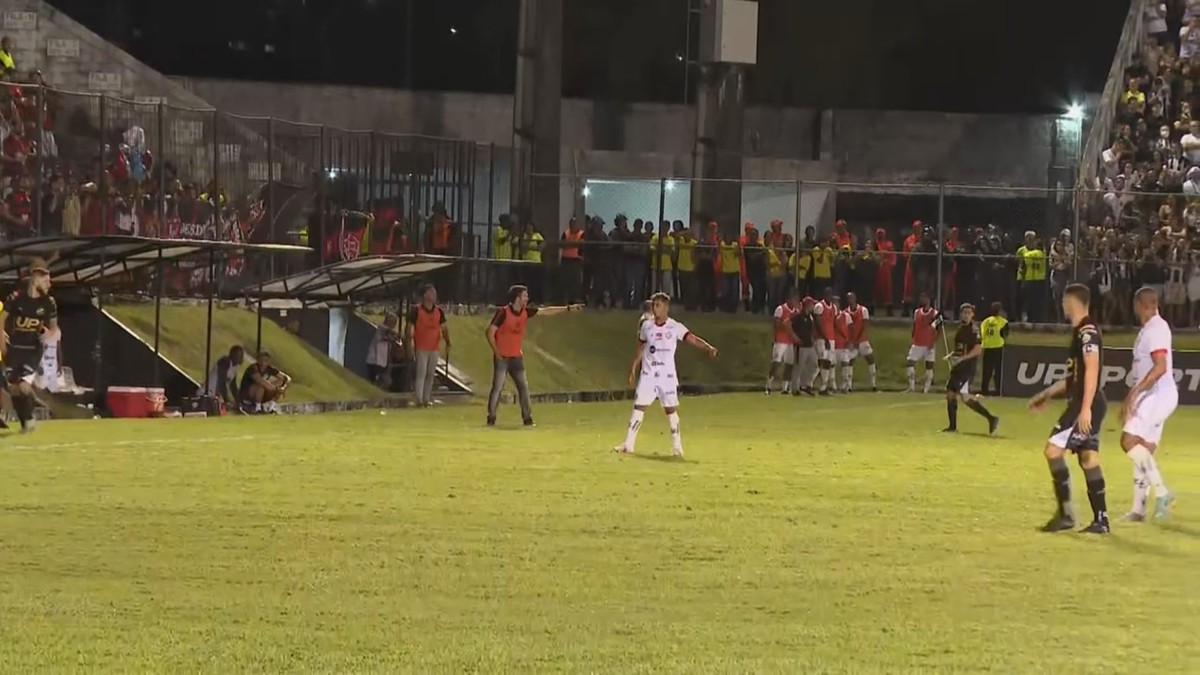 On Saturday night, Vitória drew again 0-0 with ABC, this time at Frasqueirão, for round #4 of the second phase of the C Series of the Brazilian Championship. One of those responsible for the result was goalkeeper Dalton, who made important interventions and guaranteed a point away from home for Leão.

In a press conference after the match, coach João Burse praised the team’s performance and made a point of mentioning the team’s goalkeeper coach, Itamar Ferreira.

– First of all, talk about the professional who works with Dalton, Ferreira. Tireless, hardworking, always in the details preparing the goalkeepers. Dalton is fantastic, we are very happy with what he has done. Happy for Dalton’s game and delivery of the athletes – said the coach.

When analyzing his team’s match, the commander explained the plan for the game at Frasqueirão and talked about the “forced” substitutions that resulted in the drop in performance after the break.

The coach drew Gabriel Honório and Dionísio, who reported pain, and Luidy, who had received a yellow card in the first stage. Gabriel Santiago, João Pedro and Hitalo entered, respectively.

– We had a good first half, everything we planned happened. We put Léo in a line of five, we knew they had this edge situation. So from the five line, close the edges. It worked 5-4-1, starting with three, with Sanchez himself.

“We made the exchanges, decided to close more in the middle, but their team grew.”

Finally, Burse valued the point scored away from home and projected a positive result against Figueirense, next weekend, when Vitória returns to play at Barradão.

– Of course we wanted to win the game, but we will value the draw and we will try to beat Figueirense with the support of the fans – he summarized.

Vitória will now have a whole week of preparation before facing Figueirense, for the fifth round of the second phase of Series C. The game is scheduled for next Sunday, at 4 pm (GMT), at Barradão.

Check out other excerpts from Burse’s interview

game overview
– We created situations in the first half, we had possession, but in the second we couldn’t keep it. Even so, we had the ball in the game with Alemão, Marco Antônio’s launch.

emotional pressure
– Given the circumstances, close to the completion of an access, we charge ourselves a lot, we are competitive. We came to win the game, unfortunately it didn’t happen. During the week we charge a lot. But there was no lack of struggle, we tried. But, more than that, the importance of adding one more point, taking this decision to our stadium, in Barradão, against Figueirense. We count on our fans. Prepare well technically, physically and emotionally. Those who live in football have to be used to decisions, and we will work to get that victory.

embezzlement
– We need the athletes available to train, adjust and, for various reasons, we don’t have the full squad. We are placing the athletes and giving them opportunities. Our job is to identify and place the best athletes.

Convocation of the crowd
– Our fans never left us, since when we arrived, in the game against Altos. He always filled the stadium. I call our fan again, there is no lack of commitment and dedication. It will be a week of hard work and delivery, we charge ourselves a lot and we will dedicate ourselves to giving this joy to our fans.

Previous Samuel L. Jackson shows off the real Nick Fury in trailer
Next Here’s Why You Should Clear WhatsApp Cache Often