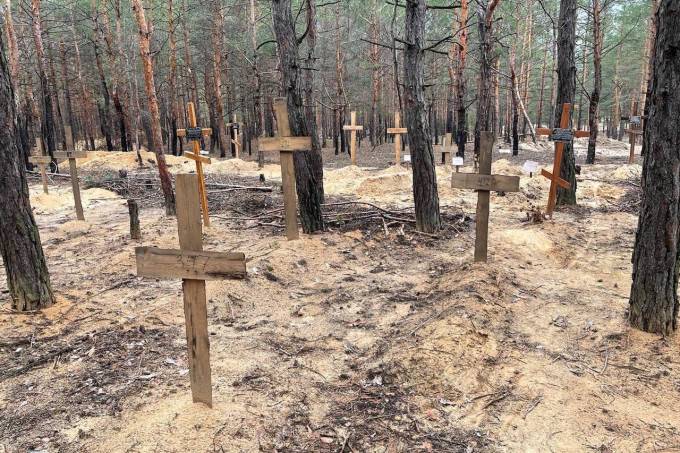 Ukraine’s President Volodymyr Zelensky has accused Russia of “leaving death everywhere it passes” after Ukrainian authorities on Thursday found a mass grave in a forest in the newly reconquered city of Izium in Kharkiv, containing over 440 bodies.

Zelensky compared the discovery to the mass murders of civilians in the cities of Bucha (on the outskirts of Kiev) and Mariupol. He called on the world to “hold Russia responsible for this war”.

“Russia leaves death everywhere and must be held accountable for it,” he declared. “The necessary procedures have already begun. [em Izium]”. More “clear and verifiable information” should be available later this Friday, he said, inviting international media to visit the site.

A video by Izium showed a sandy pine forest dotted with graves. Wooden crosses marked the locations. A handwritten sign read: “Ukrainian Armed Forces, 17 people, Izium City, [retirada] of the morgue”. Some crosses had numbers listed – 345, 347, 444. Others had no inscriptions.

Serhiy Bolvinov, chief investigator of the police for the Kharkiv region, told Sky News that some people died as a result of bombings and air strikes. He said forensic investigations will be carried out at each tomb and a process of mass exhumations has already begun.

“I can say that it is one of the biggest cemeteries in a big city in [áreas] released. 440 bodies were buried in one place,” he said.

Oleh Kotenko, Ukraine’s missing persons ombudsman who visited the forest on Thursday, said some graves had names and dates. Bodies of Ukrainian soldiers were taken in a van from the local morgue and dumped in a mass grave in black bags, he said.

Citing a video posted by Russian soldiers on social media, he said there were likely more than 17 bodies at one location. “We haven’t counted them yet, but I think it’s more than 25 or even 30,” he said. Investigators with metal detectors were scanning the site for hidden explosives.

Sergei Gorodko, a resident of Izium, said that among the hundreds of people buried in individual graves were dozens of adults and children killed in a Russian air strike on a residential building. He said he pulled some of them out of the rubble “with my bare hands,” according to agencies.

Thousands of Russian soldiers fled Izium over the weekend after a Ukrainian counteroffensive. The Russians abandoned most of Kharkiv province and retreated to new defensive positions east of the Oskil River, about 16 kilometers from Izium.

The exact circumstances of how these people died have yet to be determined. In February and March, Russian soldiers killed more than 1,400 people in the Kiev region, including the suburb of Bucha, during their failed attempt to seize the Ukrainian capital.

They surrounded, interrogated and executed hundreds of civilians. Most victims were men. They also included the female village chiefs, who were shot and buried with their families, and parents and children shot as they tried to flee by car to safety.

Dozens of bombed-out buildings in Izium city center are abandoned and roads are covered with debris from one of the fiercest battles of this war, resulting in the deaths of at least 1,000 people, according to Ukrainian officials.

The city has been described as a second Mariupol, because of the heavy bombing it suffered. The Russian army killed more than 20,000 people in Mariupol, a city in the southeast on the Sea of ​​Azov, according to Kiev. Russian soldiers surrounded the port in early March and bombed it systematically until mid-May, attacking by land, sea and air.

Survivors buried their loved ones in makeshift graves next to their apartment blocks and in playgrounds. Others were buried in the basements of residential buildings destroyed by Russian attacks. Bodies lay there for weeks.

Russia has repeatedly denied that it targets civilians or has committed war crimes.

Previous After criticism, Apple defends the eSIM on the iPhone 14 and lists its benefits
Next Donostia Trophy for Cronenberg