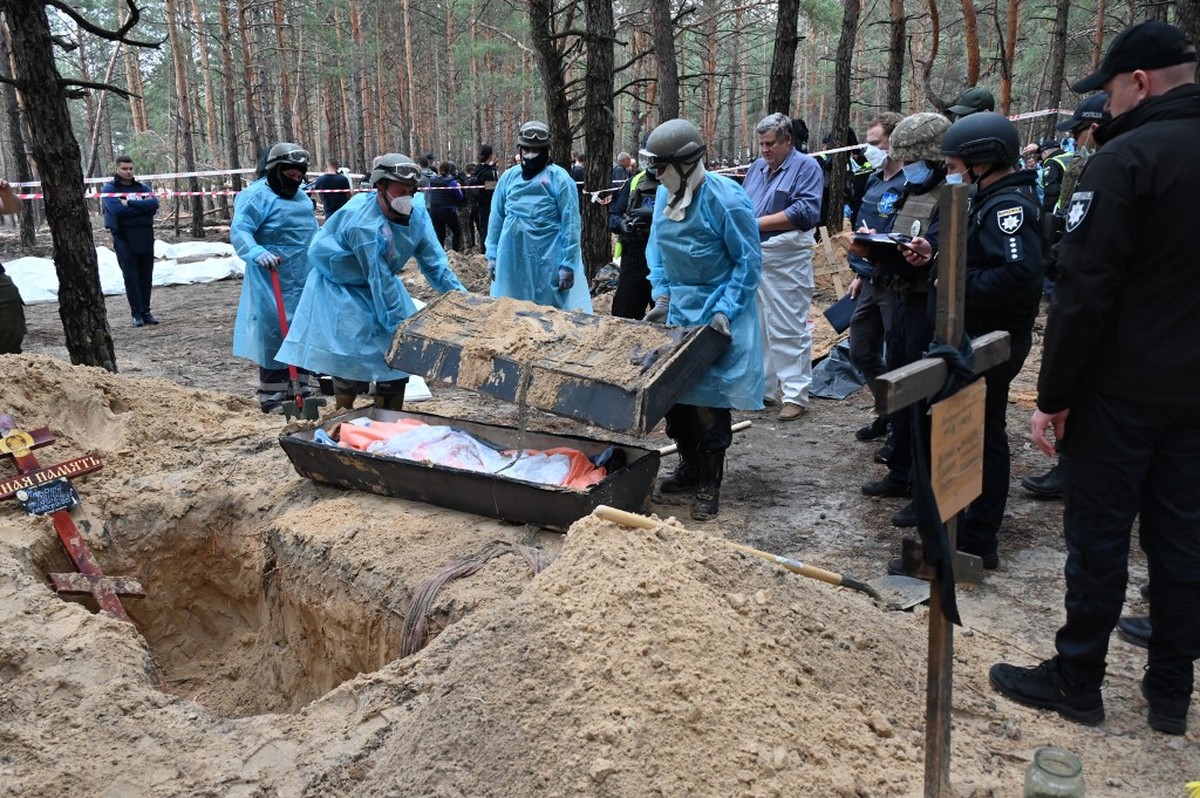 After a mass grave and hundreds of graves discovered in Izium, eastern Ukraine, ten “torture rooms” were found elsewhere in the Kharkiv region, recently retaken from the Russians. The head of the Ukrainian national police, Igor Klymenko, reported on Friday (16) about the cameras discovered at the site.

“So far, I can speak of at least ten torture chambers (discovered) in localities in the Kharkiv region,” including two in the village of Balaklia, he said, quoted by Ukraine’s Interfax news agency.

After the government of Ukraine announced the discovery of 450 graves near Izium, in areas reconquered from Russian forces in the east of the country, the United Nations (UN) High Commissioner for Human Rights indicated a desire to send a team to the site ” soon” to “determine the circumstances of the deaths of these people”.

Forensic technicians remove a body from a mass grave in the Ukrainian city of Izium (Photo: Juan BARRETO / AFP)

The UN has also been informed by the Ukrainian police chief about “torture rooms” in locations reclaimed from the Russians in the Kharkiv region. There would be at least six in Izium and two in Balaklia, according to Klymenko. According to him, the bodies of about 50 civilians were found this week in that region, after the stampede of Russian soldiers towards the south of the territory.

Ukrainian authorities began on Friday the exhumation of bodies deposited in graves found near the town of Izium. At least one body had its hands tied with rope, an AFP journalist noted. It was not immediately possible to determine whether it was a civilian or a soldier, as the body was in very degraded condition, according to the AFP journalist.

Only a detailed examination can clarify the causes of death. On Twitter, Ukrainian presidential adviser Mikhailo Podolyak referred to the hundreds of graves found as “large-scale burials”.

Ukraine’s achievements in the counteroffensive in Kharkiv — Photo: BBC

According to Oleg Kotenko, a government official for the search for missing persons, these graves were dug during the fighting, when the city was taken by Russian forces in March, and during the occupation, which ended last week. Some graves may contain multiple bodies.

Throughout the conflict, Russian forces were accused of various abuses in areas under their control. Bodies of executed civilians were discovered in Butcha, a suburb of Kiev, after the invaders retreated in late March. Moscow denies having committed these atrocities.

Image released by Volodymyr Zelensky in a text about the damage caused in Kryvyi Rih — Photo: Disclosure

Fighting between Russian and Ukrainian forces continues this Friday in all directions.

On the southern front, where Ukrainian forces face more resistance than in Kharkiv, the “situation remains difficult”, but Ukrainian forces continue to bomb bridges used by the Russian army.

After the invasion launched on February 24, the West imposed a series of sanctions against Russia and supplied weapons to Kiev.

During a visit to the capital on Thursday (15), the President of the European Commission, Ursula von der Leyen, promised that the EU will support Ukraine “as long as necessary”. When asked on television whether Russian President Vladimir Putin should appear before international justice, she argued that he should answer for his actions.

The attorney general of the pro-Russian breakaway Luhansk region in eastern Ukraine died in an explosion on Friday. Sergei Gorenko was at his place of work, the authorities announced, denouncing a “terrorist act”.

“Today, as a result of a terrorist act, (Lugansk) Attorney General Sergei Gorenko and his deputy Yekaterina Stegleenko were killed,” the pro-Russian leader of this breakaway region, Leonid Passechnik, told Telegram.

Pro-Russian officials also reported further attacks against people holding positions in the administration of the occupied areas in southern Ukraine.

Previous Google will have to compensate woman who appeared in Street View; understand
Next The Walking Dead | Norman Reedus is excited about Daryl spin-off