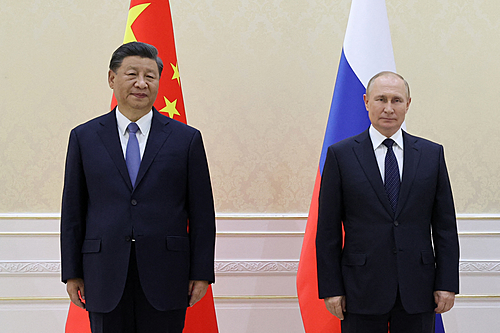 in the last episode of The Crane: the China-Africa podcast, Mika Erskog and Amadeus Musumali look at the origins and customs of the Chinese Mid-Autumn Festival which comes with orange flowers, poetry, weddings and old surfers. Listen here (in English).

This week, Gisela Cernadas spoke with Barricada TV in Argentina about President Alberto Fernández’s official request for the South American country to join the BRICS group. Watch the interview (in Spanish) here.

The meeting took place in Uzbekistan with the participation of 15 heads of state; the SCO, which has eight full members and has just added Iran, represents 41% of the world’s population and 24% of the world’s GDP. Xi met with Putin and said China is willing to strengthen mutual support with Russia.

Since 2017, China has made emergency loans totaling BRL 173.5 billion to Pakistan, Sri Lanka and Argentina, the main beneficiaries of this aid in the Global South.

The objectives of the credits are to avoid defaults on infrastructure loans carried out under the New Silk Road framework or to alleviate debts with the IMF. Chinese financial aid is more attractive to developing countries because, unlike the IMF, it does not involve imposing austerity measures.

US to restrict sale of Nvidia’s two most advanced chips to Chinese customers, expected to affect the country’s top artificial intelligence (AI) systems

The chosen small and medium-sized companies will have preferential treatment to help the country become a stronger technological power. The central government has planned to allocate 10 billion yuan (R$7.5 billion) to 1,000 of these companies between 2021 and 2025.

In 2021, the authorities prevented 1.5 million people from transferring BRL 251 billion to scammers, which emerged in the 1990s and have grown by 20 to 30% a year in recent years. New law allows authorities to pursue suspects abroad and requires cooperation from companies and banks.

The company — which has not yet released its 2021 balance sheet — owes BRL 118.5 billion abroad and faces a petition in Hong Kong demanding its liquidation. In response to mortgage defaults on undelivered apartments, Evergrande said it plans to restart construction on 38 developments by the end of September.

The solar panel base has an installed capacity of 3 gigawatts and an investment of R$ 11.3 billion, and will have an annual production of 5.78 billion kilowatts. Between January and July, renewable energies accounted for 31.8% of the electricity generated in the country.

Chinese scientists discover new mineral on the Moon called Changesite-(Y), the sixth in the history of lunar missions

Lunar samples were obtained on the historic 2020 Chang’e-5 mission. China is the third country to discover a new lunar mineral, after the US and the former USSR, and plans to carry out three expeditions with the aim of starting to build one. moon base and send astronauts by 2030, with Russian collaboration.

Many young people have moved to large cities where they face pressures related to housing, transportation and consumption, changing their attitude towards marriage. Divorces are down 35% due to a new “cooling off” law that seeks to discourage separations.

Government seeks to expand medical coverage for the population, especially for the elderly, rural residents and women

The goal is to cover at least 75% of the population and 85% of priority patients by 2035. By 2021, rural areas received qualified clinics and doctors, allowing 36.1% of the population to have access to medical services. The city of Rugao, known for its longevity, has been building a high-quality medical system for the elderly.

Previous Shopee, Southeast Asia’s largest e-commerce company, closes factories, lays off employees and Brazil may be on the radar
Next Ceará beats Athletico on penalties and wins the Brasileirão Feminino Série A2 | women’s football