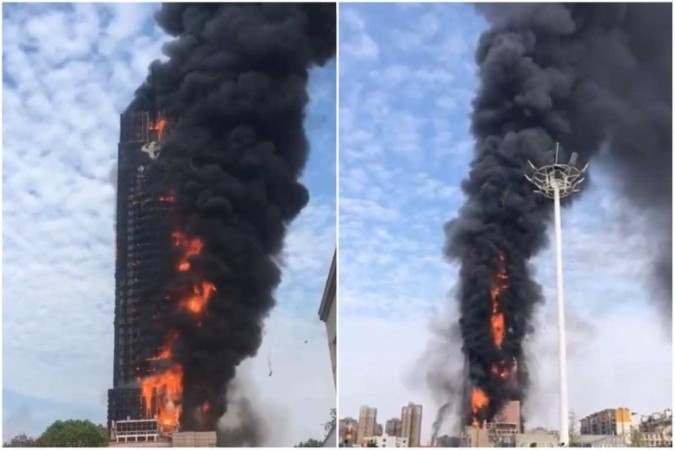 Fire Destroys 42-Story Building in China; there are no victims


Flames that took over the skyscraper were seen from afar in the city of Changsha – (Credit: Twitter / Reproduction)

A large fire destroyed the headquarters of the telecommunications company China Telecom, located in Changsha, in the Chinese country, on Friday morning (16/9) – local time. The 42-story, 218-meter-tall building suffered from violent flames that spread throughout most of the building and were extinguished only around 5pm. According to state broadcaster CCTV, there were no casualties.

The burning skyscraper mobilized 17 fire stations, 36 emergency trucks and 280 agents to fight the fire. According to firefighters, the most damage was done at the ends of each floor. However, the building’s rooms were filled with dense smoke.

Workers managed to get out of the building safely via the emergency stairs. Local authorities are still investigating the origin of the fire and what caused it. Images shared on social media show the violence of the flames. Look:

Half an hour ago in Changsha, Hunan, a China Telecom building caught fire.

The company states employees have been evacuated pic.twitter.com/55m7pAR3Mv


This afternoon, the building of China Telecom building in Changshacaught fire, no casualties reported yet, stay safe everyone! pic.twitter.com/QNnezk2Mxk

Dozens of storeys of the more than 200m tall China Telecom building “burned with great intensity”, sending thick smoke into the sky#China pic.twitter.com/XlhKso1Wyp