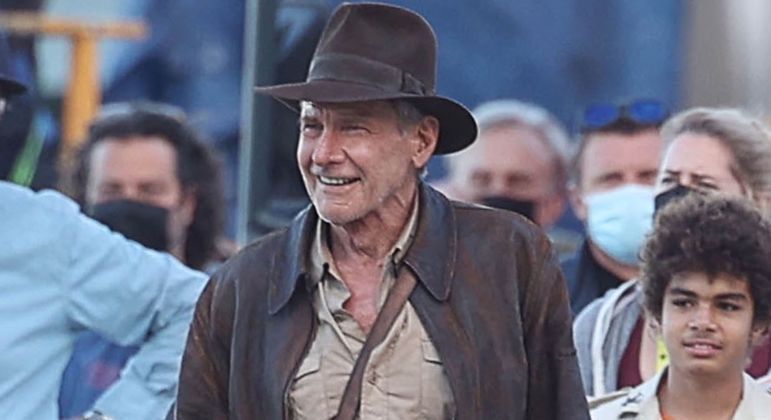 Harrison Ford caused a stir when he appeared in Hall D23 at the Anaheim Convention Center in California to promote the new Indiana Jones adventure, the fifth, directed by James Mangold, at the D23 Expo, Disney’s fan convention. The audience’s reaction moved the 80-year-old actor. “Thank you for making these movies an amazing experience for all of us and for giving us the opportunity to make these movies for you,” he said.

He also stated that he was happy with the result of this feature, implying that he did not feel the same as the previous one, Indiana Jones and the Kingdom of the Crystal Skull. “I’m proud to say it’s fantastic. And that’s one of the reasons,” said Ford, pointing to Phoebe Waller-Bridge (creator of Fleabag). The actress and screenwriter returned. “Trying to keep up with this guy is exhausting,” she said.

Ford continued. “Indiana Jones movies have mystery and adventure, but also heart. We have a very human story to tell, and a movie that rocks.”

But Ford also said it will be his last time as the archaeologist. “That’s it. I won’t fall for you anymore,” he said.

Afterwards, the audience was able to get a taste of what the film will be like, with the presentation of a very exciting teaser. Mads Mikkelsen appears as a Nazi, Indy rides the New York subway, and a beloved character Sallah (John Rhys-Davies) can also be seen. In the last scene, there is a reversal of the famous scene from Indiana Jones and the Raiders of the Lost Ark (1981), in which a man juggles a whip, only for Indy to grab his revolver and shoot, impatient. Here, it’s Indy who uses his whip to juggle, only to have a dozen men pull out their revolvers.

Lucasfilm president Kathleen Kennedy also teased other news, including the trailer for the third season of the Mandalorianfilled with appearances by Grogu, better known as Baby Yoda.

She welcomed on stage Jon Favreau and Dave Filoni, who are behind several of the studio’s projects. Filoni showed the trailer for the series of six animated short films Jedi Stories, three of them focused on Ahsoka Tano and three on Count Dooku, telling the origin of these characters. Ahsoka is also a main character in a live action series starring Rosario Dawson.

director of Spider-Man: No Return HomeJon Watts is in charge of Skeleton Crew, in partnership with Chris Ford. Jude Law, who plays Captain Hook in Peter Pan & Wendyis in this story about “Lost Boys in the Star Wars Galaxy”.

Warwick Davis reprises her role as Willow in a series named after her character. The actor introduced Christian Slater as a member of the cast and brought the trailer for the series based on the 1988 film.

Closing the panel, the only film from the 20th Century: Avatar – The Water Way, by James Cameron, who is still in New Zealand working on the production, slated for a December release. Actors Zoe Saldana, Sam Worthington, Sigourney Weaver and Stephen Lang took the stage to talk a little about the film.

Afterwards, 3D glasses were distributed and some scenes were shown. Couldn’t understand any of the plot – certainly on purpose. But, yes, to see the richness of details of this world and the advancement of technology.