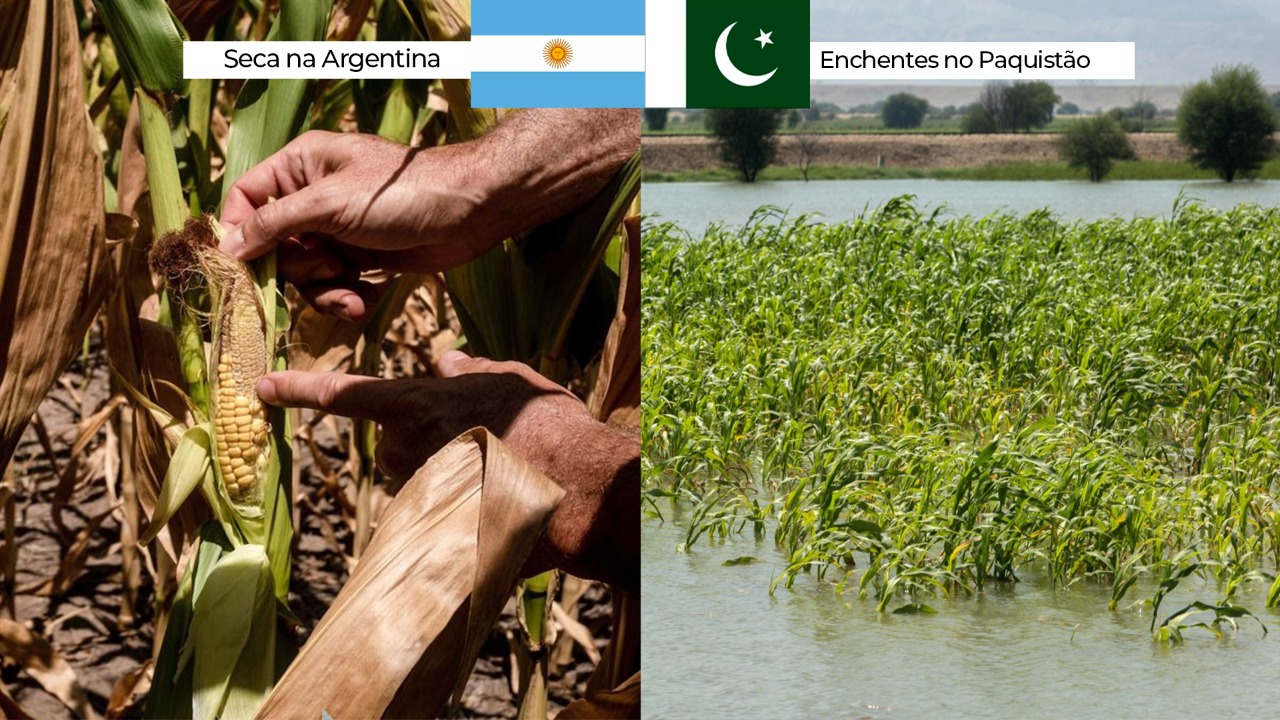 World suffers from restricted supply of food, fiber and energy when walking…

Much is said about the new soybean crop that is starting at this moment in South America, however, with the possibility of a new La Niña, for the third consecutive year, being established brings new concerns to agricultural production worldwide for dozens of people. cultures. A survey carried out by the international news agency Bloomberg, shows that the climate phenomenon, repeating itself for the third consecutive year, has already led the planet to accumulate damage of almost US$ 1 trillion.

The probability of a La Niña happening again – a reflection of a cooling in the equatorial Pacific – and one that continues through October has increased to 97%, according to a new forecast from the US Center for Climate Prediction. The chance that he will stay until January has risen to 80%.

This week, the Australian Meteorological Institute also reconfirmed the occurrence once again of the phenomenon.

@BOM_au confirms a La Nina is underway in the tropical Pacific. pic.twitter.com/KcKQruO3oT

And it is in the face of these increasing probabilities that the calculations of losses are made. After all, as Bloomberg also stated, “the price of everything from a cup of coffee to the coal used in the steel industry is affected by the weather. When those costs rise, it fuels inflation.” And a new La Niña arrives after years of a pandemic, in the midst of a war between Russia and Ukraine – directly impacting agricultural and energy commodities -, with recession knocking on the door of important economies, global logistics completely disorganized and after aggressive losses. recorded in recent harvests worldwide.

More than that, new breaks are already being recorded in the new seasons due to climatic adversities ranging from extreme and unprecedented droughts to floods that punish entire areas of planting. The most recent example is the floods in Pakistan. Important rice and cotton regions were drastically lost due to excessive rainfall.

“Pakistan is the fifth largest producer and fifth largest importer of cotton in the world. The volume of imports estimated by the USDA for the 2022/23 crop is five million fados, being historically behind only the 2020/21 crop, when there were 5.3 million bales. The expected production is 5.5 million bales, the lowest since 20/21 in the last 35 years”, explains the Agrinvest Commodities team.

The country has already declared a state of public calamity, as the rains far above normal that have arrived in recent days have reached about a third of Pakistani territory and affected 810,000 hectares (2 million acres) destined for agricultural production. “The monsoon period is known for a high level of rainfall, however, this year the month of August reached record rainfall”, completes the consultancy. They are 243% above the national average since 1961.

In addition to losses in crops, Pakistan also lost large volumes of products that were stored, in addition to numerous structures, and more than a thousand people lost their lives in the floods. In addition to rice and cotton, vegetable fields were also lost, with tomatoes and onions. Worse still, the planting of the new wheat crop was completely compromised, at a time when the world is already suffering from very tight grain supplies. Corn also suffered and several crops were flooded.

“The agricultural sector is in a turmoil. Cotton and vegetable crops have been completely wiped out in many key areas. The severe weather just didn’t give us a break. First the heat wave, now the floods,” said the vice president. Pakistan Business Forum Ahmad Jawad, who grows wheat, corn, citrus and sugar cane told Bloomberg.

Among agricultural production losses in its main crops alone, the losses in Pakistan have been estimated at over US$2 billion.

Still on cotton, the crop in Texas – the largest cotton lint producing state in the United States – was decimated by one of the worst droughts in decades. The US recorded the largest abandonment of cotton areas in history, with more than 40% of the area not harvested, as explained by market analyst Bruna Stewart, from Agrinvest Commodities.

“In Australia, heavy rains led to a loss of quality in last season’s grain crop, and this year’s rains have already delayed the planting of wheat and barley,” Bloomberg reports. In South America, in addition to the historical losses suffered by soybeans – the largest in history, of almost 40 million tons in the 2021/22 crop – and by the two corn crops, coffee, sugarcane and oranges also suffered in the Brazil.

In Argentina, losses were felt even more aggressively in the corn fields and, this Thursday (15), the Rosario Stock Exchange reported that one of the worst droughts in almost 30 years in the main production areas of the country should delay the start of planting the new cereal crop.

“This is one of the most complex situations we have seen in recent decades. We have to say that it is the worst scenario for planting corn in the last 27 years,” Cristian Russo, chief agronomist at Bolsa de Rosario (BCR) told Reuters.

About China, less than a month ago, Notícias Agrícolas published a survey of extensive areas of rice and corn being punished by the heat wave.

The six areas most affected by the drought – Sichuan, Chongqing, Hubei, Henan, Jiangxi and Anhui – accounted for nearly half of China’s rice production in 2021, according to a note from international bank Goldman Sachs this week. And so, China’s Agriculture Ministry said over the weekend that the current climate framework is posing a “serious challenge” to falling grain production and again urged local authorities to strengthen capital investment. and resources to combat drought. In Henan province more than 1 million hectares have been affected, according to a CCTV report, still according to Bloomberg.

In Europe, as highlighted by market analyst Marcos Araújo, from Agrinvest Commodities, one of the highlights is the loss of the corn crop. “French corn production is expected to be the lowest since 1990. Estimates that the European Union’s corn crop could fall by 17 million tonnes.” And with these losses, Araújo makes the parallel with substitute products, such as rice.

“India, which is the world’s second largest producer and world’s largest exporter of rice – with 37% of global exports, around 20 million tonnes per year – saw the government, to control the rise in prices, put a tariff on exports of the grain. by 20% (…) So, if there is a reduction of five million tons in the Indian export program it causes a big disruption in the supply chain because several other exporting countries do not have this surplus to meet these exports. Pakistan, which has suffered from these terrible floods. So rice should be the next commodity to be the market leader”, details the analyst.

All crops feeling in the field at the same time, makes the prices of all of them feel too. Markets have already been very volatile since the beginning of the Covid-19 pandemic, accumulating other scenarios and culminating in worrying moments around the global food supply.

“When we trade commodities, we have to understand the substitute products”, adds Araújo, remembering that all these losses between important cereals in human and animal nutrition – such as rice and wheat – can stimulate a larger area of ​​corn in the next American harvest, demanding that the soybean price reacts to ensure that it can “buy planting area” and not be left behind.

Thus, the analyst reinforces the need to monitor the market from this broader perspective, with the issue of food security still at the center of discussion for all governments.

“The food crisis and food security are not resolved for 2023, there is a production of nitrogen (fertilizers) today made unfeasible in the European Union by the high prices of natural gas, and the world is, more or less, ‘forcing’ an economic crisis to contain demand and hold prices”, says Araújo.

The message, then, is clear. The challenges to produce will be very great, but the portion of the population that needs more food is also large.