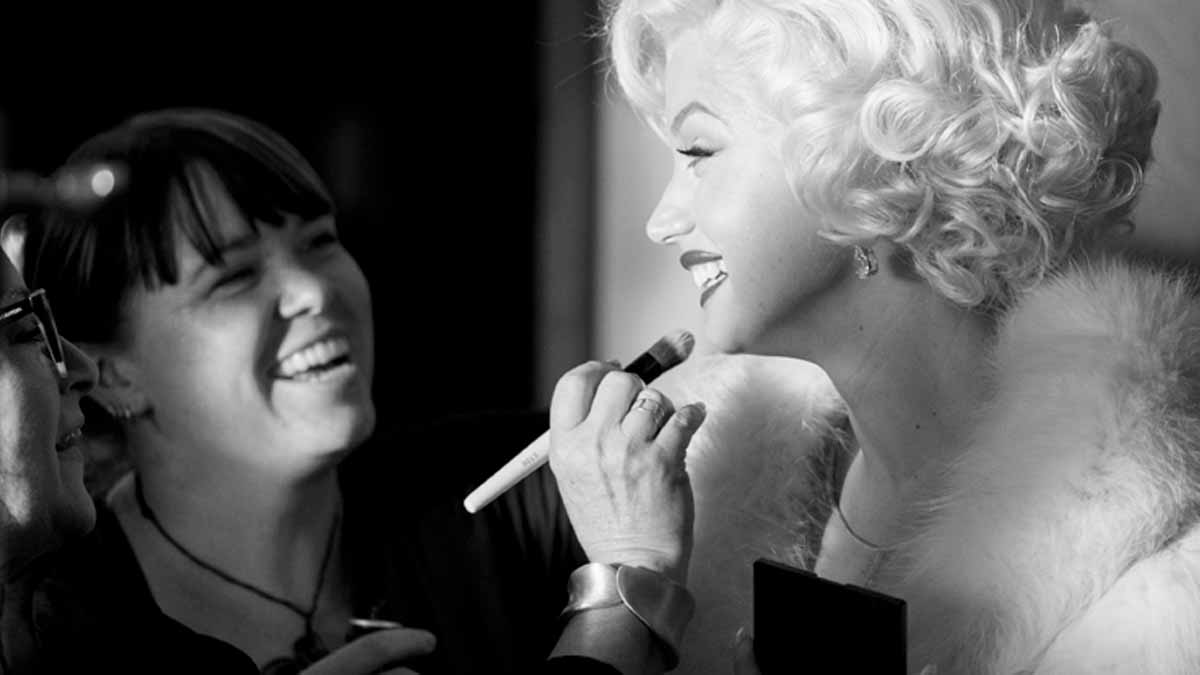 When a Cuban-born Spanish actress with long dark hair and hazel green eyes appeared on the set of blondeon the first day of filming, looking so much like the blue-eyed blonde Marilyn Monroe, there were audible gasps. Commitment level of Ana de Armas to become Marilyn was akin to an act of allegiance and the hair and makeup team was eager to serve alongside her.

“These transformations were very complicated because we didn’t need to get just one look right. This is a story about 36 years of Marilyn Monroe’s life, so we went through all the phases, not just talking about the hair color or the look, it was who Norma Jeane was, who Marilyn was. We don’t use any prosthesis. It was all makeup. Every day was a challenge. Every day was a surprise. And it was one of my favorite parts of the day.”

“From an artist’s point of view, we tried to be faithful to the original, both for Marilyn Monroe and for Ana..”

In his first meeting with the director Andrew Dominik, he informed the Makeup and Hair team that he wanted the story to be told through the research photographs hanging on the walls of the production office. And Kerwin recalls:

“He was adamant that he didn’t want us to just put Marilyn makeup on Ana. He wanted us to find Marilyn inside Ana; and that became our goal.”

Head of the Hair Department, Jaime Leigh McIntoshknown for her work on films as diverse as black Panther (2018) and the scandal (2019), was tasked with perfecting Marilyn Monroe’s iconic hairstyles and explains how that process went:

“This movie required a lot of studying Marilyn Monroe’s hair. Styling the wigs was a challenge because her hairstyle is a personality in its own right. Trying to get the little details right so that it looked like her hair and not a wig was of paramount importance. It took a lot of practice, planning and testing for me to finally find Marilyn. But once I put one of those blonde wigs on Ana, boom. That for me was the key to the transformation.”

The demanding makeup process was not quick and Tina Roesler Kerwin recalls:

“Every morning she would get a wig and then a partial bald spot to block out her own hair so the wigs fit properly. Then we started her makeup. In total, it took between 2 and a half to 3 hours..”

About the products used by Marilyn Monroe:

“There are so many stories about her makeup and her makeup artists that we managed to find all the little tricks they used. Also, she had some favorite makeup items that we managed to track down. In addition to the Chanel #5 perfume she wore, she had a few favorite makeup brands. We were able to find some cool recreations of many of these colors, especially with their lipsticks..”

Just as Ana de Armas was thrilled during her first performance, so was the team that helped her create the look. And according to McIntosh, one of those emotions was relief:

“The first time I saw Ana fully as Marilyn was incredibly emotional because it was like, ‘Oh, we did it!’“

“I think there was a moment where we thought, ‘Oh God, this is amazing, but oh God, we have to do this every day!’“

Of course, Tina Roesler Kerwin and Jaime Leigh McIntosh also had to work their magic on the rest of the cast and their crew were all equally committed to getting the details right.

For example, Bobby Cannavalewho plays Monroe’s second husband, the former athlete, arrived at the Hair Department with a lot of ideas and a beautiful mane, recalls McIntosh:

“That was a pleasure and we pretty much went with whatever Bobby wanted us to do. He was on the right track and knew how he wanted his character to look and feel..”

AND Adrien Brodywho played her third husband, the playwright, went even further.

“I was incredibly grateful that Adrien allowed us to lean into this character with him and adjust the hairline, to thin out the hair. I think it made a big difference.”

Kerwin explains that Blonde is not just a film about a beautiful woman and her sensuality:

“People all over the world know and recognize Marilyn Monroe as a superstar and I believe they will be fascinated by this telling of her story. It’s darker than some stories but has a lot of humanity. There’s universal appeal because you see how she struggled with the ups and downs in her life and struggled to figure out who she was and build on that. Blonde is a story of challenges and successes.”

“I hope people feel like they’ve seen something unusual and different when they’re done with the movie. Because it’s confrontational, because there’s some darkness that maybe some people can relate to. Understanding that it might be all glitz and glamor on the outside, but there might be other things going on. And honestly, I hope they end the movie saying, ‘How did they get Ana de Armas to look so much like Marilyn Monroe?’.”

blonde arrives at the catalog of Netflix on the 28th of September.

Character Makeup and its iconic films

Meet the makeup artists of season 4 of Glow Up

Casting has the ability to make or break a television show, and fans are more …