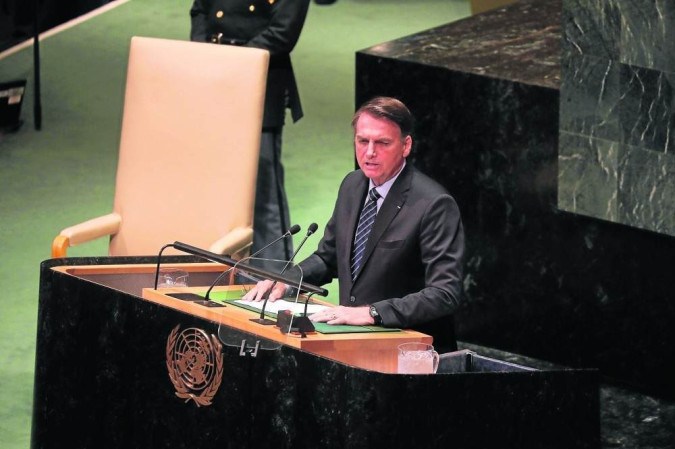 President Jair Bolsonaro (PL) arrives on Monday (19/9) in New York to participate in the Opening Session of the 77th General Assembly of the United Nations (UN), which, this year, has as its motto “Solutions through solidarity, sustainability and science”. According to tradition, the Brazilian representative opens the annual work with a speech lasting 10 to 15 minutes. In the final stretch of the October election, although on an international stage, Bolsonaro will not fail to wave to the domestic electorate, citing, mainly, the improvement in the performance of the economy.

The list of data that Bolsonaro intends to highlight includes the drop in inflation, the reduction in fuel prices, the creation of jobs and the increase in Auxílio Brasil, which he promises to continue, if reelected. It should also highlight, as in previous years, themes of the so-called customs agenda, such as the position against abortion and the legalization of marijuana, in addition to the usual attacks on “communism”.

Other topics, such as the consequences of the covid-19 pandemic, the war in Ukraine, climate change, renewable energies, the environment and food security were also suggested by Itamaraty.

In the area of ​​the environment, the president should highlight the commitments made at COP26 to cut global methane emissions by 30% and eliminate illegal deforestation by 2028, in addition to pointing out that the fight against climate change needs to be a global effort.

According to the Secretary of Multilateral Political Affairs at Itamaraty, Ambassador Paulino Franco de Carvalho Neto, the Chief Executive should not meet with leaders of the main powers. He claimed that the schedule was incompatible because of his short stay in New York, but said there was a possibility that meetings would take place today in London at the funeral of Queen Elizabeth II.

After participating in the UN, Bolsonaro is expected to have bilateral meetings with Presidents Guillermo Lasso (Ecuador), Alejandro Giammattei (Guatemala), Andrzej Duda (Poland) and Aleksandar Vui (Serbia), in addition to a meeting with the UN Secretary General, Antonio Guterres.

Bolsonaro left Brazil last night after participating in the March for Jesus in Caruaru, Pernambuco (read about the candidates’ day on page 3). Before the agenda at the UN, the Chief Executive participates, today and tomorrow, in ceremonies for the funeral of Queen Elizabeth II.

The first lady, Michelle Bolsonaro, accompanies her husband on the trip, as well as the Minister of Foreign Affairs, Carlos França. According to the official agenda released by Palácio do Planalto, the president will visit, this afternoon, the Burning Chamber of Queen Elizabeth II and sign the book of condolences. In the early evening, he will have a meeting with King Charles III, successor to Elizabeth II.

Tomorrow, around noon, you will be received by the UK Foreign Minister, James Cleverly. Bolsonaro is expected to leave London at 5 pm (local time) for New York.

On Monday, at the UN, the Minister of Communications, Fábio Faria, will join the presidential delegation; the Chief Minister of the Civil House, Ciro Nogueira; the Minister of the Environment, Joaquim Leite; and the head of the Secretariat for Strategic Affairs, Admiral Flávio Rocha. The command of the reelection campaign will also be with Bolsonaro in the United States: federal deputy Eduardo Bolsonaro (PL-SP); the president of the Chamber, Arthur Lira (PP-AL); and the campaign’s head of communications, Fabio Wajngarten.

With Bolsonaro’s trip, the Presidency of the Republic was assumed on an interim basis by the President of the Senate, Rodrigo Pacheco (PSD-MG), who does not contest the elections. Vice President Hamilton Mourão (Republicans) and the Speaker of the House, respectively first and second in the line of succession, will have to suspend their campaign agendas and travel abroad to avoid ineligibility. The general will fulfill his agenda in Peru.

The first vice president of the Chamber’s Foreign Relations Committee, deputy Rubens Bueno (Cidadania-PR), believes that, at the UN, Bolsonaro will make a speech with “nothing to say”. “Just look at his worldwide condemnation of the conduct of health policy in Brazil during the covid pandemic, the vacillating position in the face of the war in Ukraine, attacks on democracy and the country’s elections, the situation of advancing poverty and misery in which Brazil is located. In practice, it has more to justify itself. I don’t see what can electorally profit from these two trips”, he says.

Former Brazilian ambassador to the US Rubens Barbosa characterizes the agendas as a “photo opportunity”. “Bolsonaro appears as a statesman speaking to the world. He will reiterate the customs agenda and mention the agenda recovered by Itamaraty. I believe that the two trips will have little impact on the October election”, he predicts.

Diplomat and professor Paulo Roberto de Almeida says that the president will try to obtain electoral gains and should not deal with foreign policy. “At the funeral, (Bolsonaro) will have an almost marginal presence. At the UN, it will be something embarrassing for Brazilian foreign policy. On none of the three previous occasions did he talk about the foreign agenda, as is the custom of the representatives. The first participation, in 2019, It was pathetic,” he says.

“He spoke about his victory in the elections as an important milestone to save Brazil from communism, and then continued to address the internal agenda. I do not imagine that there will be a special message on the external agenda. hunger. From 2019 to 2022, the speeches do not fit the standards, they are bizarre and schizophrenic from the point of view of representing Brazil in debates on the world agenda.”, he adds.

Political scientist André Rosa analyzes that going to the queen’s funeral, despite a protocol action, also impacts Bolsonaro’s image, if he opts for a strategy of a diplomatic and less aggressive speech, especially amid the hiatus in relations between Russia. and England, which was in favor of Western sanctions.

“Speech projection is also something with a high dissemination impact, and due to the fact that it is in an uncomfortable position in the polls, any event that can increase its popularity becomes positive”, he observes.

“Both the UN and the funeral are media spaces that can help the president’s image, but not to the point of a turning point in the final stretch, but to capitalize instruments aimed at the dispute of the second round.”

Danilo Morais, professor of Political Science at Ibmec’s graduate program, stresses that Bolsonaro will try to ride on the broad visibility of the two events to promote himself electorally, adopting a domestic tone to the detriment of international affairs, with nods to the electorate. This will be Bolsonaro’s fourth participation in the UN. In 2020, he spoke by videoconference, because of the covid-19 pandemic.

Previous Without Flamengo, will Maracanã return to Suderj? – 09/17/2022
Next He’s crazy! Tom Cruise stands with moving plane on set of ‘Mission: Impossible 7’