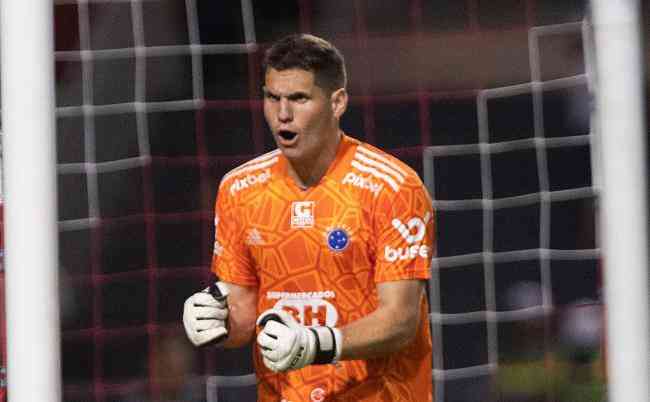 Cabral praises Cruzeiro squad: ‘We are where we are because of the group’

Rafael Cabral praised the Cruzeiro group after the 2-0 victory over CRB, this Saturday (9/17), at the Rei Pel Stadium, in Macei-AL. The 32-year-old goalkeeper was once again decisive in the triumph for the 30th in Srie B, but he insisted on highlighting the Raposa squad.

In this one, he provided opportunities for some athletes who had less minutes in past games, such as Marquinhos Cipriano and Stnio – scorer of one of the goals.

“We come on a journey that we have our dream. We face each game as a final. Thank God today we can win, play well. This team has been running a lot, and I think it’s the result of spectacular work. important”, said Cabral, in an interview in the mixed zone.

With the result, Cruzeiro reached 65 points and depends only on a victory against Vasco on Wednesday, at 21h, in Mineiro. Ready to help the club achieve its main objective this season, Cabral highlighted the collective strength of the team and the importance of the positive performance of players who are less used.

“The boys who entered, had the opportunity, were decisive too. We are very happy for them too. It shows how, sometimes, those who are not playing do well and show that they are humble, that they work during the week. It is a strong group. we are because of the group, not because of one or another player”, he concluded.

Absolute holder of Cruzeiro in 2022, Rafael Cabral completed 47 games with the celestial shirt.

Previous Earthquake hits Southeast Taiwan; Tsunami Warning Issued | World
Next The story of the 1,700 Galicians who went to Cuba to seek their fortune and ended up enslaved – 09/18/2022