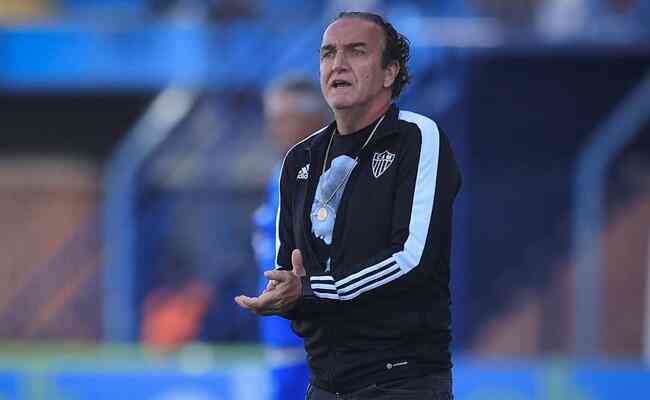 Cuca raises tone, talks about the future at Atltico and promises improvement: ‘You can charge’

Coach Cuca showed annoyance with the moment experienced by Atltico, who lost 1-0 to Ava this Saturday (17), in Ressacada, for the 27th round of the Brazilian Championship. The alvinegro commander raised the tone and promised that the team will improve.

Cuca was the first to serve the press that night, right after the revue in Florianpolis. then the

Caetano deflected the conversation and said that the issue should be addressed at the right time. Cuca, then, took the microphone to position herself on her future and the moment of the Rooster.

“Atltico is also about to become a SAF (Sociedade Anima do Futebol). If the numbers are still bad as they are, it’s natural that they don’t even want me. We have to be very practical and realistic: the numbers are horrible. keep these numbers here. I’m going to stir the candy and I’m going to make it turn, whatever the cost. You can charge me. Thanks!?”

Minas Gerais, Brazilian and Copa do Brasil champion for Atltico in 2021, Cuca left the club in December. He came back in July of this year, but his performance hasn’t been good at all. In ten games, there are two wins, four draws and four defeats. In the period, the team was eliminated from Libertadores.

“The fans can rest easy on one point: the guys are being charged. And very charged. Sometimes, even beyond what we can. Hardly charged. For me, for Rodrigo. We’re not here with our arms crossed. is happy, satisfied”, continued Cuca.

“The charges we make are internal. No one will expose player ‘A, B or C’ here. On the contrary: we all lose, we lose together. And we still have 11 rounds to go, who knows, from the next one, that against Palmeiras, start in search of qualification for the Libertadores”, added the coach.

It will be ten days until the match against Palmeiras, on the 28th of this month (Wednesday), at 9:45 pm, in Mineiro, for the 28th round of the Brazilian Championship. Galo is in seventh place, with 40 points.