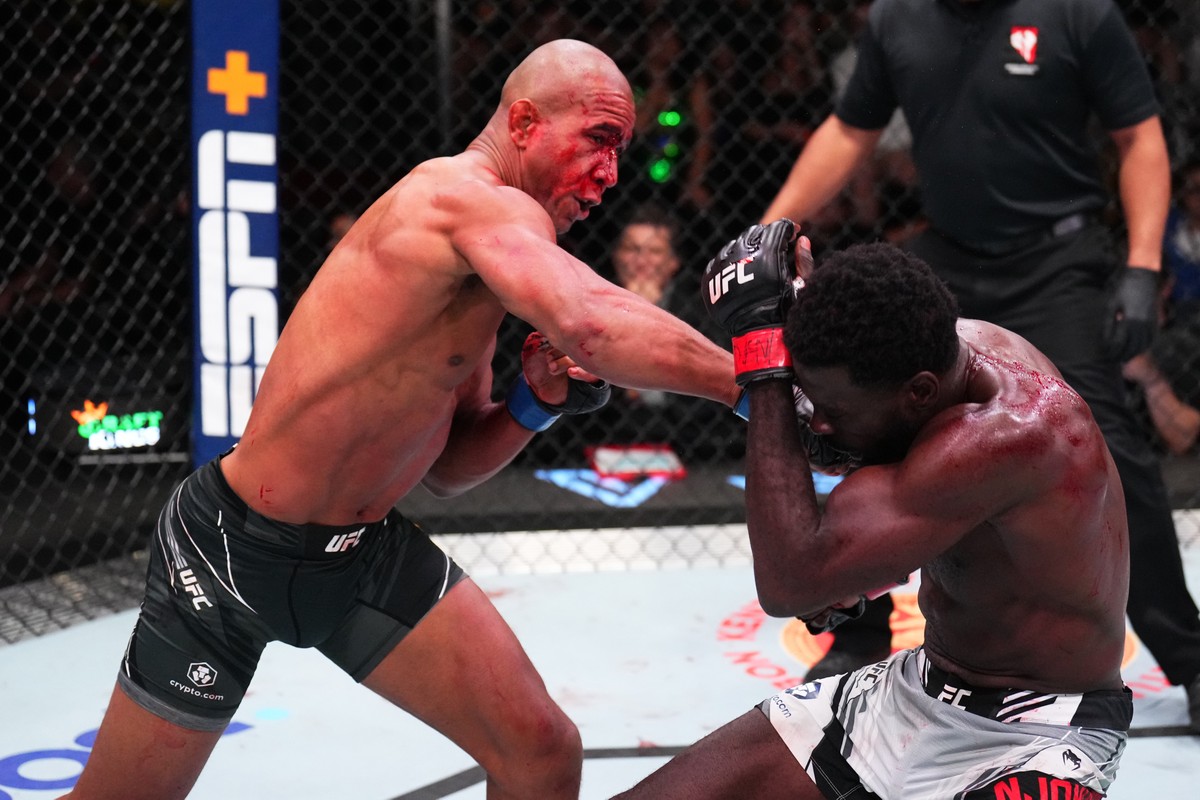 Gregory Robocop lived up to the nickname on Saturday night. In the co-main event of UFC Sandhagen x Song, the Brazilian seemed indestructible even when the scenario was favorable to his opponent. After taking a hard knee against him at the beginning of the fight, the fighter got the comeback and beat Chidi Njokuani at 1min27s of the second round, by technical knockout, this Saturday, in Las Vegas (USA).

It was Robocop’s fourth victory in five UFC fights. He also imposed Njokuani’s first setback in the company, as the American was coming from four consecutive triumphs, the last two after being hired by Ultimate.

In the first blunt action of the fight, Robocop went into a takedown, but found the American’s knee from the front, which opened a deep cut on his face. Despite that, the Brazilian reacted quickly, also hit punches in the straight striking and started looking for more hip takedowns, however, Njokuani got up fast. With his nose bleeding profusely, Robocop looked uncomfortable and suffered from the speed of his opponent’s blows. And, just when the scenario was adverse, the Brazilian connected a powerful right in the face of the rival, who collapsed. He went up, landed a lot of hits, but Njokuani absorbed it.

Gregory Rodrigues had to overcome a deep cut on his face to win – Photo: Getty Images

The fight continued to accelerate on the way back to the second round. Robocop had more punches and, by shortening, got the takedown. On top, he punished with ground and pound, and Njokuani just defended, until the central referee correctly interrupted the fight.

Song Yadong gave everything he could and even threatened Cory Sandhagen, but he didn’t give the number 10 in the rankings his chance to take the shortcut to the top 5 at bantamweight (up to 61kg). The Chinese man was left with a very big wound on his eyebrow and saw the doctor interrupt the confrontation at the end of the fourth round, giving the victory to the American by technical knockout. Fourth in the division, he interrupted a run of two negative results.

Sandhagen looked for the takedown from the opening moves and, in the exchange, he felt the danger that the Chinese could take. However, when the fight went to the ground, Yadong landed on top, went to the back, but lost the position. The American worked hard on his change of base and the jabs to surprise, but he had work with the speed of the Chinese.

In the second round, Sandhagen came back accepting more of the fight standing up, but threw a lot of punches in the void and received a left-handed hook that shook him. Yadong started for it, but was knocked back by a flying knee. After this moment, the American again started looking for takedowns, but stopped in the rival’s good defense, and the assault continued balanced in the striking. By then, Yadong had a lot of bleeding on his face.

With the cut getting in the way of Yadong, Sandhagen grew in the third round and became more effective in striking, always moving around the cage. In the fourth round, the Chinese surprised with a takedown, but couldn’t capitalize. The wound at the height of the eyebrow was huge, and Sandhagen took the opportunity to try to hit the spot. The American even put it down before the end of the assault. At halftime, the doctor did not allow Yadong to return and ended the fight.

Rodrigo Zé Colmeia had hard work, but he got the victory against Tanner Boser for the heavyweights (up to 120kg) by split decision (30-27, 28-29 and 29-28). The Brazilian used his takedowns well to neutralize the Canadian and secure the victory.

Zé Colmeia showed intelligence at the beginning. Facing a rival with good movement and dangerous standing, he quickly closed the distance and applied the takedown. However, the Brazilian was not aggressive on the ground and lost his position after about three minutes on the ground. Standing, Zé Colmeia was still in danger when he connected a bomb to Boser’s face. In the second round, the Brazilian returned to swing the opponent with a right on the counter, but Boser responded with good combinations, which also made the opponent feel.

Zé Colmeia still managed a takedown before the end of the round, went to the back and tried a hand-to-hand choke, but couldn’t get the adjustment. In the final round, the start was balanced in the striking, and the Brazilian managed to put him down. From half guard, he was once again underactive, but did enough to control until about 30 seconds to go, when the center referee forced the athletes to their feet, but there was no time for Boser to turn around.

In the other fights, the one who shone the most was Joe Pyfer. A newcomer to Ultimate, the American didn’t know about Alen Amedovski and got the TKO at 3:55 of the first round after landing a precise right right on his opponent’s head, which collapsed. He still punched the fallen rival before the central referee interrupted. It was the Macedonian’s fourth defeat in four fights in the organization.

Another highlight was Anthony Hernandez, who submitted Marc-André Barriault at 1:53 of the third round. Before putting in the kata-gatame that solved the fight, he still impressed with a takedown when throwing the opponent with his head on the ground.