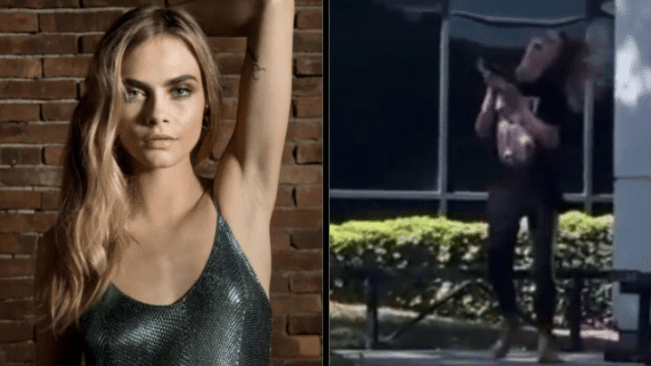 Cara Delevingne has everyone worried that she may be struggling with substance abuse issues.

We’ve seen celebrities get involved in drug abuse and addiction scandals before, but in the age of social media, evidence that this actually happens is circulating the internet faster than ever, causing a lot of gossip about which stars are at this bad stage in life. . More recently, the “Paper Towns” actress Dear Delevingnewas filmed looking seriously out of sorts and acting erratically while waiting outside Van Nuys Airport in California.

The 30-year-old’s behavior has sparked a lot of concern with some people speculating that she’s dealing with mental health issues and/or serious addictions at the moment, and according to TMZ, her closest friends are eager to get the help she needs. accurate model. On Friday (September 16), the outlet revealed that those around Cara are “desperate” for her to go to rehab.

Just a few days ago, the “Wolf of Wall Street” actress Margot Robbie, was photographed leaving the English star’s home looking distressed. While the 32-year-old actress’ reps haven’t explained to the media what has her so distraught, many are speculating that it’s related to Delevingne’s condition, which has only become more worrisome.

According to a source, Robbie had “good reason” to be so emotional after what she saw at her friend’s house. It has not been confirmed whether the Tulip Fever actress is struggling with addiction, although in the past she has spoken openly about drug use. Delevinge was supposed to attend an event earlier this week at New York Fashion Week, but ended up not showing up, raising even more concerns.

Dealing with various addictions is a complicated moment, in which the person is vulnerable. Following this reasoning, a well-known rapper in the industry, Eminem, had a time in his life when he was addicted to drugs. In August, her daughter reported her fear of growing up with her father because of drugs and more recently, it was discovered that many doubted that Em could sing again after this tragic phase.

I hope Cara Delevingne is OK. Margot Robbie was seen leaving Cara’s house while crying. I don’t know what’s going on but I’m worried for her because lately she has been getting made fun of like cyber bullied. pic.twitter.com/EWDHqE4e7N

Doesnt she have a family.. someone needs to help her

Just seen the video of Cara Delevingne and it just made me sad. The poor girl is heavily struggling with addiction. The comments, as expected, revolting. Clearly made by people who’ve never had the misfortune of facing it themselves. Hang your head in shame. bastards.

Cara Delevingne is an example that addiction doesn’t care who you, where you came from, or what you’ve done in your life. It’ll come for anyone.

My heart hurts for her. I know she’ll come around, it’s just never an easy thing to do.

y’all might not like Cara Delevingne but at least have the decency to not make fun of her current state. She is obviously going through something, it could be drugs or it could be something else like mental health, she she’s a human being and she deserves to be treated like one

Dear Delevingne omg…. someone get her help pic.twitter.com/szQt5L8Fzb

It’s so disgusting to see how the media and y’all are making fun of the Cara Delevingne situation, it’s not funny to make jokes about it. pic.twitter.com/Ig3OLOo4s1

Maybe Cara Delevingne will be the “It Girl” to wake up all the lefty privileged kids about what meth looks like, and that it’s no joke. https://t.co/QwHPKMShrv

What Cara Delevingne needs is privacy & support while she gets the help she quite obviously needs, but instead of the media will hound her & do anything they can get footage of her looking her worst for a story. How they’re allowed to get away with it is beyond. literal murderers

Previous ‘GIFs are cringe’: Animated image site says it’s out of fashion and asks to be sold to Facebook owner | Technology
Next Weverton explains discussion with Soteldo in Palmeiras x Santos and jokes: “It wouldn’t be good for him”