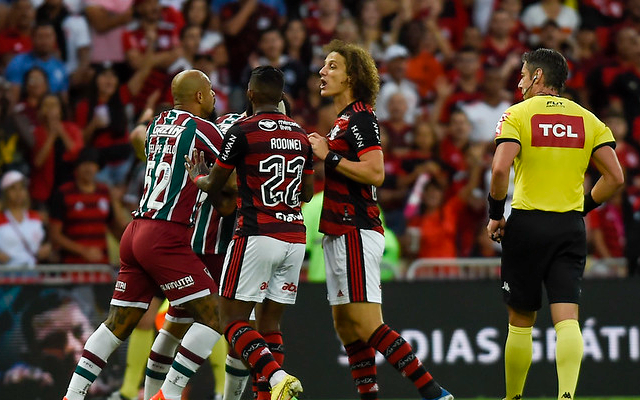 Recognized for being a foul player with ‘excessive will’, midfielder Felipe Melo, from Fluminense, starred in regrettable scenes in Fla-Flu this Sunday (18), in the Brazilian Championship. The confusion generated four red cards, two for each side. Worse for Flamengo, who, in addition to the expulsions, lost the game 2-1.

The Fluminense player came on at 39 of the second half. In the next minute, the athlete revolted with a foul by Marinho on Ganso and pushed the red-black, who retaliated. Thus, the Flu athlete started a general confusion, which ended with four expulsions, but even so, the steering wheel passed unharmed, without being warned. On the side of Mengão, Everton Cebolinha and shirt 31 himself received red. For Tricolor, Manoel and Caio Paulista were punished.

With the result, Flamengo continues with 45 points, but fell to fourth place in the Brasileirão, being overtaken by Fluminense itself. Rubro-Negro can still finish the round in sixth place, if Corinthians and Athletico-PR win their respective games. The leader is Palmeiras, with 54. The São Paulo team still enters the field this Sunday (18).

Flamengo returns to the field now on the 28th, a Wednesday, to visit Fortaleza, in a match for the 28th round of the Brazilian Championship. The break between matches takes place on account of Data-Fifa, and Mengão had six players called up: Everton Ribeiro and Pedro in Brazil, Vidal and Erick Pulgar in Chile, Varela and Arrascaeta in Uruguay.

While the Brazilian Championship is further away, Flamengo will be able to focus more on the Copa do Brasil and Libertadores finals. On October 12 and 19, Rubro-Negro faces Corinthians in the decisions of the national tournament, while taking on Athletico-PR on 10/29 for the continental competition. The latter will be in a single game, in Ecuador.

To meet fan requests, the sports metropolis will lower the price of tickets for the …