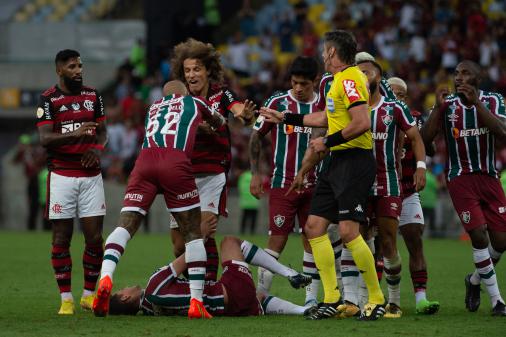 Flamengo vs Fluminense: in summary, Claus misses goal scorer and details expulsions from the classic by the Brasileirão

The CBF released the summary of the classic between Flamengo and Fluminense, this Sunday, at Maracanã, with a 2-1 victory for Tricolor. When detailing the authors of the goals of the match, Raphael Claus ended up wrongly crediting the goal scored by Nathan. The referee also detailed the reasons for the expulsions on both teams.

+ Flamengo becomes a joke on the web after defeat to Fluminense; see the memes

Raphael Claus recorded in a summary that Fluminense’s second goal was scored by Germán Cano. However, Nathan was the one who headed into the back of the net at 30 minutes into the second half.

The referee also detailed the sending-off of David Braz, at the beginning of the game, and the confusion that ended in two sending-offs for each side at the end of the match. See below:

-> LIVE AND FREE: LANCE! is streaming Bundesliga matches live for free. Check out all the information about the tournament and broadcast here.

Manoel – I expelled Mr. Manoel, from Fluminense, in the 42nd minute of the 2nd half, when the game was at a standstill, after a foul was scored in favor of his team. The same ran towards his opponent, giving a lunge with his chest, finishing with his arms behind his opponent’s back, initiating a riot between the players.

– Marino – I kicked out Mr. Mario Sérgio (Marinho), from Flamengo, in the 42nd minute of the 2nd half, when the game was paralyzed, after he committed a foul pushing his opponent, starting a riot.

– Everton Chives – I expelled Mr. Everton, from Flamengo, in the 45th minute of the second half, when the game was paralyzed, for holding his opponent’s neck tightly.

– Caio Paulista: I expelled Mr. Caio, from the Fluminense team, in the 45th minute of the 2nd half, when the game was paralyzed, for headbutting his opponent

Faced with the flood of injuries in the defense of the Brazilian team, coach Tite …