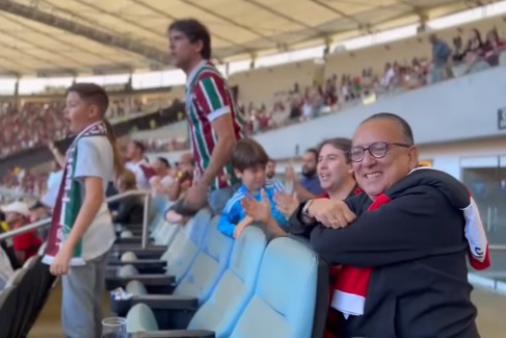 Galvão watches the classic at Maracanã and Fluminense’s reaction to a goal goes viral; Look

The narrator Galvão Bueno watched the match between Flamengo and Fluminense, this Sunday, at Maracanã. A Rubro-Negro fan, the announcer didn’t hide his ‘yellow smile’ with a tricolor goal. The video was shared by his son Cacá Bueno.

+ Former striker from Santos and Flamengo is denounced for rape; he denies

– Are you ready for the best video of the year? At 72 years old, he had never come with his family to Maracanã as a fan. Children and grandchildren gathered, half tricolor and half flamengo. His face of embarrassment in the goal of the Flu is priceless, but he took it all with FairPlay and elegance, although I exaggerated a little (laughs) Come on! – wrote Cacá, a tricolor fan.

+ LIVE AND FREE: LANCE! will broadcast Bundesliga matches live for free from this Saturday

Before the game, Galvão Bueno also published a photo with his family in one of the boxes at Maracanã. The narrator also went to one of Globo’s broadcast booths and spoke with fellow broadcasters Luis Roberto, Roger Flores and Junior.

+ Thiago Neves can return to Fluminense: see 25 famous Brazilian players without a club

– Fla x Flu at Maraca for the first time with all 7 grandchildren, sons and daughters-in-law. Is there anything better than a family Sunday? – wrote Galvão Bueno, who carried a retro Flamengo shirt, by Maestro Júnior, on his shoulder.

Previous See Which World Leaders Will Be at Queen Elizabeth II’s Funeral | World
Next The Pope: we must use the goods of this world to take care of the weakest