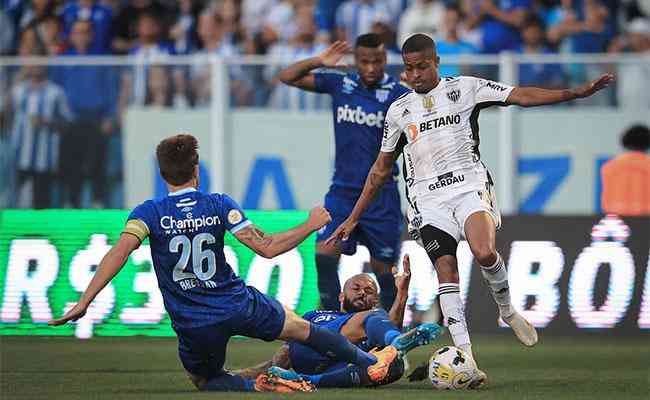 In a bad phase in the Brazilian Championship, Atltico was defeated by Ava, team from the relegation zone, last Saturday, away from home. With another negative result, Alvinegro saw the chances of a place in the Copa Libertadores, the remaining objective of the season, decrease.

Before the start of the last round of the Brazilian, Galo had a 33.1% chance of playing in the continental tournament next year. After the reversal to Ava, the number dropped to 24.1%. The numbers are from the Department of Mathematics at UFMG.

Also according to UFMG, reaching 59 points is almost a guarantee of a spot in the continental competition. With this score, the teams will have a 97.07% chance of playing the Libertadores in 2023.

Atltico currently have 40 points. To reach 59, you need to add 19 in the remaining 11 rounds. It is necessary, until the end of the Brazilian, six victories and a draw.

Atltico can still benefit from the increase in vacancies in Libertadores. For that, I need the G6 to transform into G7, G8 or G9. This will occur if those who win Copa do Brasil, South American and/or Libertadores finish the Brazilian among the first places.

The final of the Copa do Brasil will be between Flamengo and Corinthians. Both teams are in the G6 of the competition. If they finish in front of Atltico, a new spot for Libertadores will be opened.

The same happens in the Copa Libertadores. Flamengo and Athletico-PR, who are in front of Galo, will face the decisive clash of the biggest club tournament in America, on October 29, at the Monumental stadium in Guayaquil, Ecuador.

The Copa Sudamericana will be decided between So Paulo and Independiente Del Valle-EQU, on October 1st, at the Mario Alberto Kempes stadium, in Argentina. Tricolor is in 13th position in the Brazilian Championship.

In this way, there is a great possibility that the G6 will become the G8. This will increase the chances of a spot in the Libertadores. If it happens and the championship ends with the current positions, Atltico (7th place) would have to play in the qualifiers that precede the group stage of the tournament in 2023.

Probability of spot in Copa Libertadores 2023

Previous Why Harry Styles and Olivia Wilde Make a Great Couple, According to Astrology
Next Blake Lively posts pregnant photos after getting angry with paparazzi: “11 guys waiting at my house”