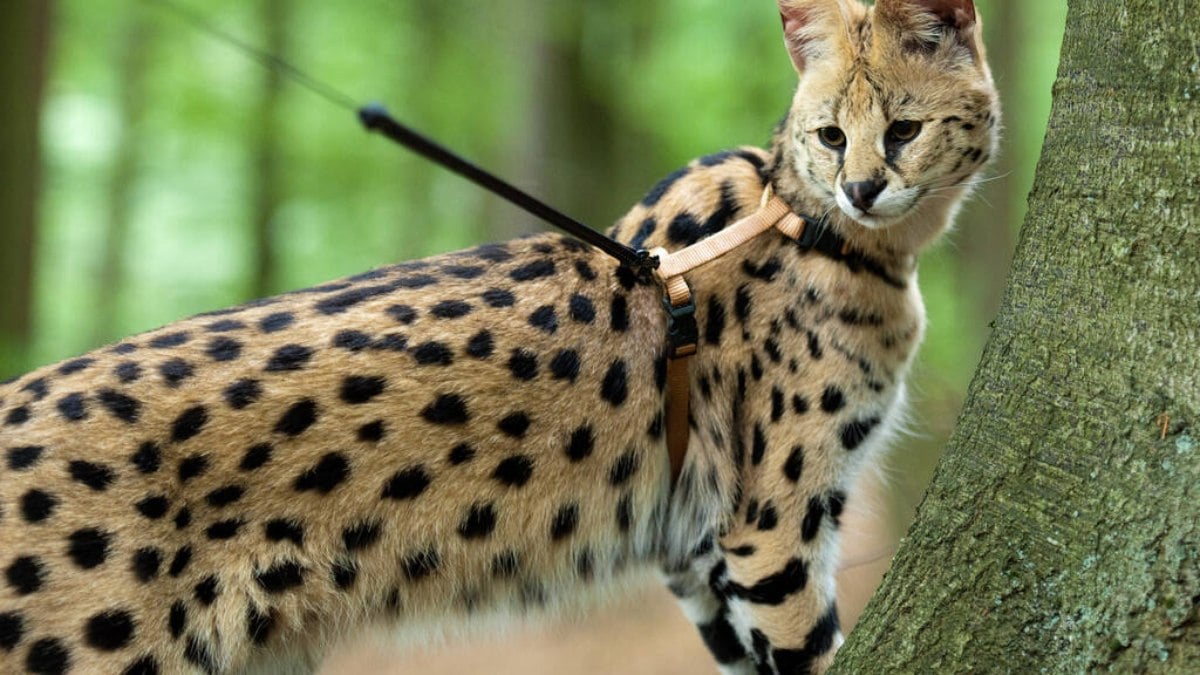 Savannah, the most expensive cat in the world

A cat of very recent origin, the first specimen of the breed was born on April 7, 1986, when Judee Frank’s pet cat gave birth to a hybrid, the result of crossing with an African wild Serval cat. A story very similar to that of the Bengal cat.

According to Judee, in an interview at an international cat show in 2003, she was taking care of a male Serval from another breeder, named Suzi Mustascio, and didn’t realize that the feline and her pet cat had mated until the cat from the Siamese breed gave birth to the first cat of the new breed, a female who was named Savannah – which also became the name of the breed itself.

In April 1989, Savannah had three kittens, the result of crossing with a Turkish Angora cat, but only two survived, and they were classified as the F2 generation. From crosses between the descendants of Savannah, the Savannah cats of generation F2, F3, F4 and F5 would come.

Upon learning about Savannah, cat breeders Patrick Kelley and Joyce Sroufe decided to join forces to develop the new breed of cat. Together they registered the new breed standard with TICA (The International Cat Association) in 2001, and the breed was only recognized in 2012.

Savannah F1:
the direct crossing of a Serval with a domestic cat. It has a behavior closer to that of a wild cat, maintaining characteristics of a domestic cat. It can reach 60 cm in height and weigh up to 25 kg. Due to its rarity, it can cost around R$100,000.

Savannah F2:
comes from the cross of an F1 with another domestic cat, it has a similar temperament, but it is a slightly smaller cat, which can weigh up to 20 kg. Its price can also reach around R$ 47 thousand.

Savannah F3:
the most common is that it comes from the crossing of two F2, the temperament is closer to that of a domestic cat, and can weigh up to 17 kg. It can cost around R$ 21 thousand.

Savannah F4:
it loses almost all the wild instinct of its ancestors, but still relatively larger than an ordinary cat. It is an easier pet to live with children and other pets. It can weigh up to 12 kg and costs about R$ 13,000.

Savannah F5:
is the closest to a common domestic cat, has almost zero interference from wild parentage in its behavior, being the most docile of all. In size and price it does not differ much from the F4, weighing up to 11 kg and costing around R$ 13 thousand.

Is it really the most expensive cat in the world?

There is controversy over the top spot when it comes to the most expensive cat breed in the world. A breed called Ashera can cost up to 125 thousand dollars (more than R$ 661 thousand), however it is a breed created by a company called Lifestyle Pets, based in Los Angeles (USA).

About five animals are produced a year, which makes it very rare and, therefore, equally expensive. Advertised as “tailor-made pets for the rich,” this practice has drawn a lot of criticism. Another controversy is that, according to experts, despite having an appearance that resembles a leopard, genetically the Ashera is exactly the same as the Savannah F1.

As explained, the further away from its origin, the less wild it is. However, this does not mean that the F1 is not a good pet – although it is not recommended for inexperienced owners.

Savana has an outstanding and very active personality, needing a lot of interaction on a daily basis – if you are not a tutor with a lot of time, it is worth having another feline to keep you company.

It is a very loyal cat to its owners. In the first generations he is not a cat that likes to be held, but he has his own way of showing affection – rubbing himself on the legs of the tutors, headbutting and following the tutors around the house.

Savannas love to play with water and fetch games, they can also be easily trained to walk on a leash, as long as the pet’s wishes are respected and never forced to do anything they don’t want to.

Overall, it is a very intelligent and affectionate cat, it needs to be mentally stimulated to prevent it from falling into boredom. It has a strong hunting instinct, so toys with this theme are a great choice.

With a short and soft coat, care is not so complicated, brushing at least twice a week will be enough to keep the coat beautiful and healthy.

As for baths, cats of the breed are generally very fond of water and will have no problem if they need to take a good bath. Unless necessary, the frequency of baths should not be more than one bath a month, so as not to harm the natural oiliness of the hair.

Savannah cats do not usually have specific health problems and are quite hardy. On the other hand, they are intolerant of injectable drugs, such as anesthetics and vaccines – this is due to the mixture with the wild cat breed.

Another issue is that F1 cats are usually sterile and those that breed usually have puppies from the F3 generations onwards. In order for them to stay healthy, it is important that they are stimulated with physical and mental exercises, not only through interactions with the tutor, but also through environmental enrichment, as they are larger than usual cats, they also need high places to climb.

They also need special care with food and oral hygiene and may have problems with common diseases in cats, such as parasitic and infectious. That’s why it’s important to make regular visits to the veterinarian so that the pet has the best quality of life possible.

To ensure that your pet will have all the help it needs, you can count on iG Pet Saúde. With plans that include routine visits, hospitalizations, surgeries, vaccinations and much more. Discover all the advantages of having a health plan designed to make your pet happy!