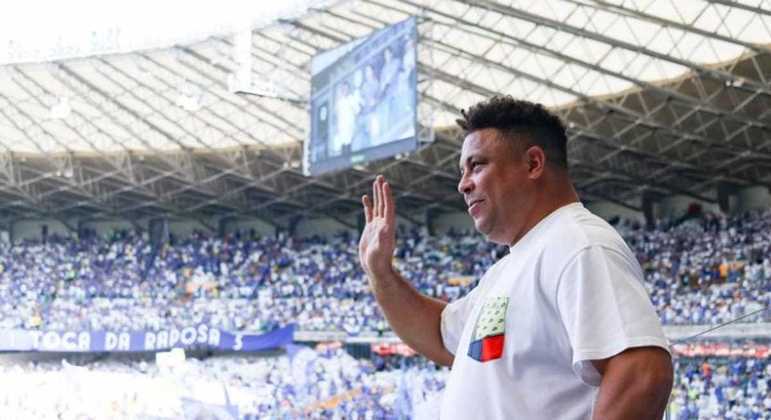 With an iron fist, Ronaldo silences those who doubted Cruzeiro. After three hellish years at B. The return to Serie A is guaranteed – Prisma

Mineirão will be full tomorrow.

September 21, 2022 has everything to be a historic date for Cruzeiro.

For three seasons, the two-time champion of Libertadores da América has suffered in the Second Division.

A simple victory tomorrow, against Vasco, puts the giant back in Serie A.

And all thanks to Ronaldo.

With intelligence, experience, he saw an exceptional opportunity to increase his fortune. And to become a powerful sports director in Brazil, a natural path for his life.

Everything doesn’t come down easily, as many understand. Ronaldo not only put in R$400 million, he bought 90% of Cruzeiro’s shares and everything changed.

The “Phenomenon” is very cold, calculating, off the field. He studied sports marketing and management in London. He then joined a club in the United States, the Fort Lauderdale Strikers, in Florida, in 2014, three years after ending his career.

The experience in the North American Soccer League, “second division” in the USA, with much less importance than the MLS, was a failure. He had as partners the Brazilians Paulo Cesso, Rafael Bertani and Ricardo Geromel. The dream of taking Brazilian athletes and forming an important team to compete in the MLS became a nightmare. In two years, the project was closed.

Ronaldo suffered, but learned. He decided that he would only return to run a club alone, with the right to make the most important decisions.

It was like this in September 2018, when it bought 51% of the shares of Valladollid, from Spain. The club has alternated ascents to the First Division with relegations. The season started badly and is in the relegation zone of La Liga.

The main difficulty in Spain is in the restructuring of the club and in the search for resources, sponsors, TV broadcasting, fundraising. The team is small.

With an estimated net worth of US$180 million, around R$940 million, Ronaldo never stopped looking to increase his wealth.

He founded Oddz Network, a holding company specialized in investments in the sports, marketing, entertainment and communication markets.

In addition to being a partner at Octagon Brasil, a marketing company with agreements with NBA Brasil, Nike, Mastercard, Brahma.

Apart from having a lifetime contract with Nike, which guarantees payment every year, to use only the sports brand.

His experience weighed heavily when he decided to leave the R$ 400 million investment in Cruzeiro unspoken.

Upon taking over the club, Ronaldo knew he could not embrace the debt of almost R$1 billion. Because if he did that, he wouldn’t be able to invest in his main source of income: football.

In a firm way, he made it clear that he would bet on assembling a strong team to move up to Serie A. Using the fans as an accomplice, and financial support.

Because, moreover, he knew that the club had already anticipated the TV and sponsor quotas two years ago.

Cruzeiro’s almost billion-dollar debt revolts Ronaldo. Because he knows he got to this frightening amount because of the irresponsibility of several club presidents. Some of them under suspicion of corruption.

Therefore, he made the legal department defend the clubs from the most pressing charges. In football, he had to pay debts from past years, in the purchase of athletes, in which former leaders defaulted. Cruzeiro was barred from trading players by FIFA.

In forming the team that makes a spectacular campaign in Serie B, Ronaldo was tough.

His first attitude was to despise the agreement that Cruzeiro had with Vanderlei Luxemburgo to direct the team in 2022. He made it clear that he wanted a modern, current coach. And he invested in the Uruguayan Paulo Pezzolano, 39 years old, old enough to be a son of Luxembourg, at 70 years old.

Then, he made it clear that the club’s biggest idol, goalkeeper Fábio, would stay, if he wanted, just to play a few games at Mineiro, to end his career.

Ronaldo was cruel and wrong with the player, who was 41 years old and played 923 games. The player left Fox Lair crying. And it shows excellent football in Fluminense.

But the owner of Cruzeiro managed to assemble a very competitive, aggressive, vibrant team, which Pezzolano made shoot in the lead of Series B.

Your team has 65 points in 30 matches. 19 wins, eight draws and three defeats.

The average audience at home is over 35,000 people.

It only loses to Flamengo, Corinthians and Palmeiras in Serie A.

In secrecy, Ronaldo already plans how Cruzeiro’s life in the First Division will be.

The club needs three points with eight games to go.

And it seeks new sponsorships, in addition to studying the player market.

Just beat Vasco, and Cruzeiro will break a record.

It will be the club to guarantee the return to Serie A with seven games to spare. The brand belongs to Corinthians, which returned in 2009, with six games to go.

The team was vice mineiro fighting against Atlético, which was in great phase. And reached the round of 16 of the Copa do Brasil, falling against Fluminense. But he raised R$ 7.6 million, enough money to pay three months of his salary, of R$ 2.5 million.

Ronaldo managed, with an iron fist, to transform the club.

As with rival Atlético, the debt, which is close to billions, endures.

But the way to pay it had to go through football conquests.

Moving up to Serie A, after three seasons in B, was mandatory.

And that’s what Cruzeiro is on the verge of achieving.

It is not by chance that it reached the mark of 69,000 supporters.

More than 55,000 tickets have already been sold for tomorrow’s game at Mineirão.

The prediction is of 60 thousand fans in the match that has everything to be apotheotic.

Guarantee Cruzeiro in Serie A in 2023.

But, if not tomorrow, there are still clashes with Ponte Preta, in Campinas; Ituano, in Mineirão; Sport, in Recife; Vila Nova, in Goiânia; Guarani, in Mineirão; Novorizontino, in Novo Horizonte; and CSA, in Mineirão.

Ronaldo doesn’t just want a return to Serie A, but the B title.

The Phenomenon brought the giant Cruzeiro back to life.

Ambitious, he has plans for his future.

And yet, one day, assuming the presidency of the CBF…


From champion rings to billionaire house: what involves the possible separation of Tom Brady and Gisele