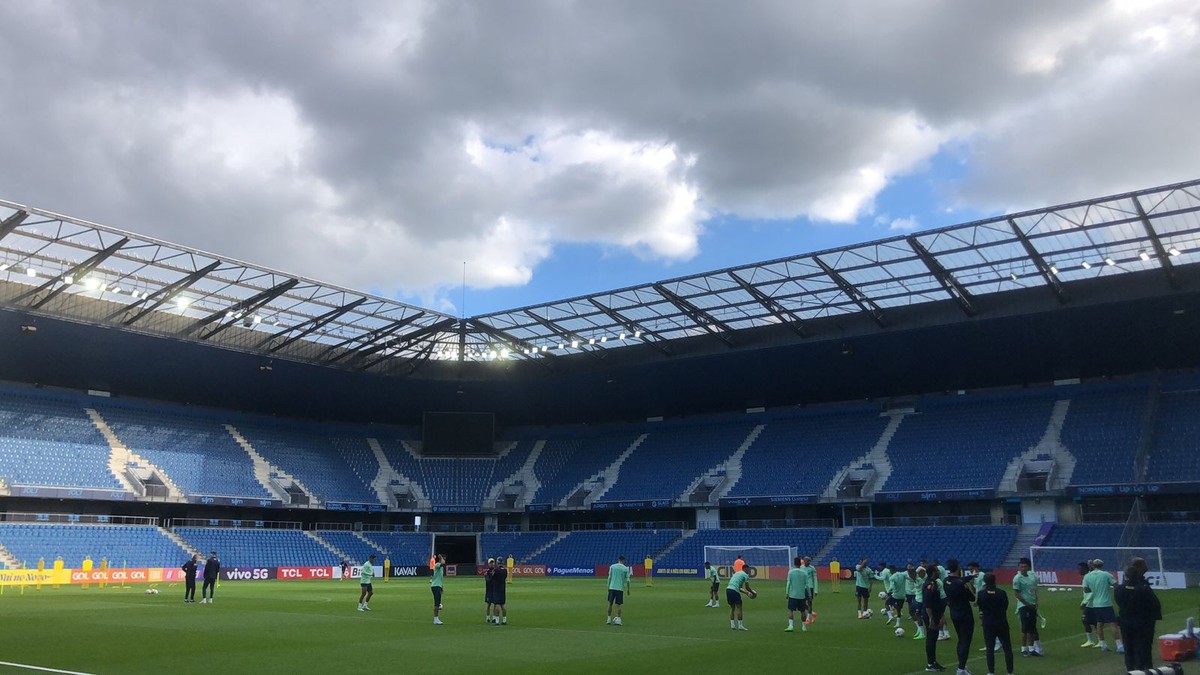 The Brazilian team trained this Wednesday at the Océane Stadium, in Le Havre, France, venue of the friendly against Ghana, at 15:30 (Brasília), on Friday. In the activity, coach Tite confirmed the lineup that he had sketched the day before.

In the penultimate game before the World Cup debut, Brazil will take to the field with an attacking quintet made up of Lucas Paquetá, Neymar, Raphinha, Vini Júnior and Richarlison.

One of the novelties in the formation is in the defensive sector. Tite will watch Éder Militão again on the right-back, as he had already done in the second half of the friendly against Japan, in June.

See too:
+ Smart ring is the weapon of the Selection to control sleep and accelerate recovery of athletes
+ Which team “provided” the most goals for the Selection? Check out!

Training of the Brazilian team at the Océane Stadium, in Le Havre, France — Photo: Raphael Zarko

Danilo, the only national right-back called up, will start the match on the bench.

On the left-back, Alex Telles took the lead in the dispute with Renan Lodi – it is worth remembering that Alex Sandro was cut due to injury.

+ Read all about the Selection

Formation of the Brazilian team with the ball — Photo: ge

The friendly against Ghana will be broadcast on TV Globo, sportv and ge.

This is not the first time that Tite uses Lucas Paquetá a little further back, as a second midfielder. A similar formation was used in the 4-0 rout over Paraguay in February. However, at the time, Fabinho played in the place of Casemiro, Coutinho played the role that this time will be Neymar, and Matheus Cunha acted as a reference in the attack.

The activity also marked the first training session on the field for Éverton Ribeiro and Pedro, Flamengo players who presented themselves to the national team after the others and did only regenerative work on Tuesday.

Along with the reserves, they participated in passing and shooting training. Subsequently, Tite promoted a collective.

During the collective, Neymar was hit in the knee and needed medical attention. However, it was nothing but a scare, and moments later, shirt 10 returned to training.

Bruno Guimarães did not participate in the activity. According to the CBF, he complained of pain after training on Tuesday and, after undergoing tests, he found a muscle edema in his left thigh. The player will undergo treatment and, at first, will not be cut.

+ Special: Danilo’s voice – side discusses topics that are taboo in football

After facing Ghana, Brazil returns to the field on Tuesday, against Tunisia, at the Parc des Princes stadium, in Paris. The Tunisians are in Group D of the World Cup, alongside France, Australia and Denmark.

Ghana, in turn, is in Group H – with Portugal, Uruguay and South Korea – and could be the opponent of Brazil, which is part of Group G. The first placed in each group cross each other in the round of 16.