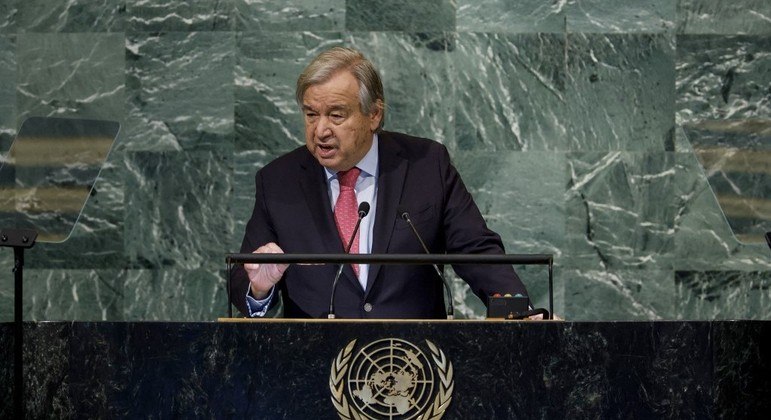 UN Secretary-General António Guterres warned world leaders gathered in New York on Tuesday (20) of the risk of “a winter of global discontent” due to the multiple crises that affect the planet.

“The purchasing power crisis breaks out, trust collapses, inequalities skyrocket, our planet burns, the people suffer, above all, the most vulnerable” and, despite that, “we are blocked by a colossal global dysfunction”, lamented Guterres at the opening gives UN General Assembly.

“These crises threaten the very future of humanity and the fate of the planet,” he warned. “Let us have no illusions. We are on a rough sea. A winter of discontent looms on the horizon.”

The international community is “paralyzed”, lamented the UN Secretary-General, who warned of the “risk of division between the West and the South”.

“Political divisions undermine the work of the Security Council, international law, people’s trust and faith in democratic institutions,” he claimed. “We cannot continue like this,” she added, stressing that “coordinated action anchored in respect of international law and the protection of human rights” is necessary.

The Russian invasion of Ukraine should be the main topic of the assembly. The war generated an increase in food and energy prices causing food insecurity for millions of people in the world.

To try to respond to the concerns of some countries, Americans and Europeans are organizing a high-level meeting on Tuesday on food insecurity, a consequence of the war that affects the entire planet.

Also in his speech, Guterres, who prioritized the fight to reduce greenhouse gas emissions, urged rich countries to tax windfall profits generated by fossil fuels to help countries that are victims of the impact of climate change and affected populations. by inflation.

With two months to go until the COP27 climate conference in Egypt, poor countries, at the forefront of the devastating impact of uninflicted global warming, are scrambling to get rich countries to deliver on their pledges of financial aid.

The UN General Assembly will not be attended by the presidents of Russia, China, Cuba, Costa Rica, Venezuela, Mexico and Nicaragua.

Previous Windows 11 supports over 20,000 Android apps and expands feature to 31 countries
Next Scientists have created ‘living’ synthetic cells by collecting ‘pieces’ of bacteria