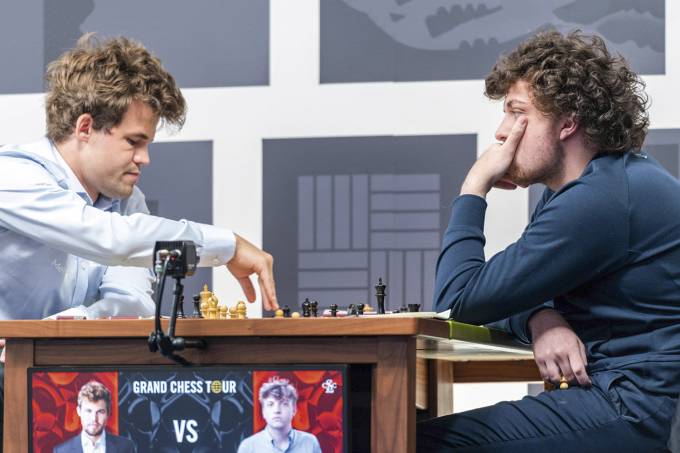 The chess universe continues to boil thanks to a accusation of cheatingnow formalized, made by the biggest star of the sport, the Norwegian Magnus Carlsen. The world champion released a statement last Monday, 26, in which he explained his suspicions against the American. Hans Niemann. Amid rumors about the hoax perpetrated by the young challenger, Carlsen, however, did not bring any new evidence of wrongdoing.

The uproar began on September 4, during the Sinquefield Cup tournament in St. Louis in the USA. Carlsen, 31, maintained an unbeaten streak of 53 games, a rare thing in an increasingly competitive sport, but he would be surprised by Niemann, just 19 years old, who occupied a modest 49th position in the world rankings. Furious, Carlsen decided to drop out of the competition and took to social media to insinuate that his rival had cheated. At the time, he posted a video of football coach José Mourinho saying that “I won’t say anything. If I speak up, I will be in trouble.”

I’ve withdrawn from the tournament. I’ve always enjoyed playing in the @STLChessCluband hope to be back in the future https://t.co/YFSpl8er3u

Versions that would explain the result quickly spread. A chess fan, billionaire Elon Musk helped to spread a noisy theory: that Niemann would have used an butt plug, whose vibrations imperceptible to the audience would represent a code on which move he should execute. Niemann defended himself and suggested playing a new game naked, even submitting himself to physical examinations. If it weren’t a joke, it would be the technological apex of an old expedient: that of seeking outside advice, whether from a human being or an electronic gadget, in search of checkmate.

The tournament organization denied any type of cheating, but the controversy was brewing. The fact that Niemann admitted to breaking the rules in an online championship when he was a child, using the aid of a computer program, and that he was suspended from the Chess.com platform, without further explanation, reinforced Carlsen’s thesis. On Monday, the Scandinavian star reaffirmed his position that his defeat was illegitimate.

“When Niemann was invited at the last minute to the 2022 Sinquefield Cup, I strongly considered withdrawing before the event. I finally chose to play,” he wrote. “I believe Niemann has cheated more – and more recently – than he has publicly admitted. His progress on the board has been unusual, and over the course of our game I got the impression that he wasn’t tense or even fully focused on the game in critical positions, while outperforming me in a way I think only a handful of players can do. This game contributed to changing my perspective.”

My statement regarding the last few weeks. pic.twitter.com/KY34DbcjLo

“Right now, I’m limited in what I can say without Niemann’s explicit permission,” he went on mysteriously. “So far I have only been able to speak with my actions, and these actions have clearly stated that I am not willing to play chess with Niemann. I hope the truth on this matter comes out, whatever it may be.”

Carlsen further said that “Chess cheating is a major problem and an existential threat to the game” and that “Chess organizers and all those who care about the sanctity of the game we love should seriously consider increasing security measures and methods.” cheat detection for above-the-board chess.”

The International Chess Federation (FIDE) chided Carlsen for dropping out of the tournament, but added that he shared the world’s “number 1’s deep concern about the damage that cheating does to chess.” Niemann, in turn, continues to deny any type of irregularity and attract unprecedented attention to himself. The confusion is set on the board and it doesn’t look close to a checkmate.