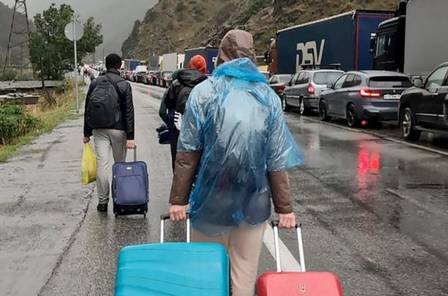 A young Russian trying to avoid military service in Russia asked a friend to break one of his legs to stay out of the recruitment process imposed by President Vladimir Putin, who wants 300,000 more men in the war in Ukraine.

The so-called “partial mobilization” has resulted in hundreds of thousands of men between the ages of 18 and 35 being banned from leaving the regions in which they reside.

The military call-up caused widespread protests in the country and panic among young people who were taking increasingly radical measures to avoid military service.

Some have tried to leave the country and cross the border into neighboring Georgia, Finland, Kazakhstan and Mongolia, with queues stretching for miles.

In a video that has gone viral on social media, a desperate Russian shows the terrible measures some are taking to avoid being drafted into the army. He sits on the floor in front of a ladder and puts his feet on the steps..

Seconds later, a friend jumps down the stairs and falls on outstretched leg, supposedly breaking bones. The man lets out a scream and bends over to the side as he manifests excruciating pain. the friend stops upset with the situation.

Conscripts in the Russian Federation break their legs to avoid being mobilized pic.twitter.com/DJzUJzrIrA

“Recruits in the Russian Federation break their legs to avoid being mobilized”says the viral video.

An article in the “Economist” quotes another Russian who clings to a vision problem not to go to the front. There are reports of those summoned who allege physical or health problems are being examined by military doctors in order to certify whether or not they are in a position to go to war.

There are videos circulating on social media showing newly deployed Russian troops being denied food and water after complaining about the poor conditions. The Twitter account “Ukraine Reporter” quoted a soldier as saying: “They have restricted access to the bathroom.”

against the war: Russians are trying to get married to escape the war in Ukraine

Previous Company uses AI to create videos with your face
Next CONTROVERSY! Movie about the trial of Johnny Depp and Amber Heard gets trailer