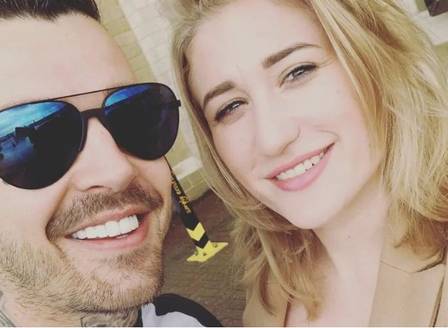 Englishwoman exchanged for refugee accepts apology from ex, who abandoned Ukrainian: ‘I love him’

Lorna Garnett, the Englishwoman her husband left for a 22-year-old Ukrainian refugee they had taken in at their home in Bradford (England), said she accepted the apology of her ex, who, after four months, kicked the foreigner out of the house.

But Lorna don’t think about taking him backalthough he confesses that the love is not over:

“I love him, I respect him, he’s the father of our (two) beautiful daughters. But there’s a lot of water under the bridge now.”she said, according to the “Daily Star”.

“We will always be friends and the best parents we can be to our girls but I will be happy for him if he has a proper new relationship and I’m sure he will be happy if that happens to me. I let this woman into my house. It took a toll on my mental health. Once the kids were in bed and asleep, I would just sit and cry and cry.”she added.

Ten days after Sofiia Karkadym’s arrival in May, Lorna decided to kick her out of the house, claiming she was hitting on her husband. Tony Garnett, in turn, decided to leave with the Ukrainian. The two went to live in another house in the city. Sofia defended herself, saying she was not a “home wrecker”, a title that still echoes on British social media. The Ukrainian also said that, because of the case, her family abroad decided to “disown her”.

However, the fairy tale for Sofia ended this week. According to Tony, the Ukrainian, in a fit of rage, used a knife to slash at a house wall. The police were called, and the refugee was detained. After being released, she returned to the address where she lived, but Tony wouldn’t let her into the house anymore. Witnesses said Sofiia kicked open the door and shouted: “Tony, I love you!” She was arrested again. When she was released, the Ukrainian went to a public shelter.

“I’m lost. I’m heartbroken and I still have feelings for Tony.”

Tony, however, said he will never speak to Sofia again.

“I’m sorry for everything that happened, she didn’t ask for it. I still respect her and have a degree of love for her.”he declared.

Previous AMD Ryzen 7000 arrives in Brazil; check the prices
Next ‘The Little Mermaid’ and Upcoming Live-Action of Classic Disney Animations

A fourth child has died from an infection with a rare type of streptococcus bacteria, …