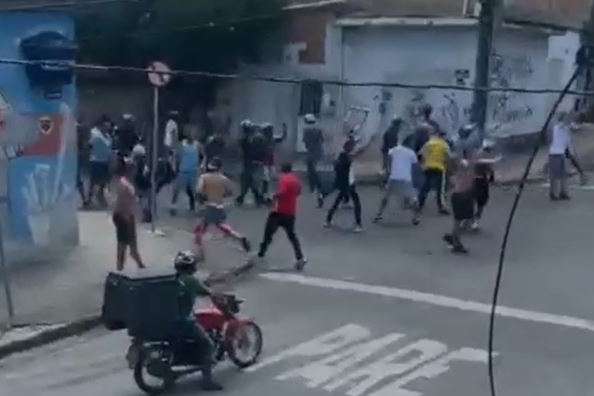 Involved in a fight with Mancha Verde, Mafia Azul is banned from the country’s stadiums

Members of the organized supporters Mafia Azul got involved in a general fight with members of Mancha Verde, from Palmeiras, on the Fernão Dias highway, in Carmópolis de Minas, in the Center-West region of the state, this Wednesday (28). The fight had people being beaten with clubs and even shot.

The members of the Cruzeiro crowd traveled to Campinas, in São Paulo, to follow the duel against Ponte Preta, but the Blue Mafia is banned from the stadiums for a year. The measure was taken by the Public Ministry of Minas Gerais (MPMG) and accepted by the Minas Gerais Football Federation (FMF). Galoucura, from Atlético, was also penalized.

The decision came after recurring episodes of violence promoted by members of the two organizations. One of the acts of truculence resulted in the death of Cruzeiro fan Rodrigo Marlon Caetano Andrade, 25, who was shot in the abdomen in a fight with athletes. The incident took place on March 6 of this year.

The resolution banning the Mafia Azul and Galoucura was published on March 18, 2022 and signed by the president of the FMF, Adriano Guilherme de Aro Ferreira. The ban consists of prohibiting the use of any material that alludes to fans in stadiums across the country.

As a result, members of the organized groups cannot go around the country’s stadiums on match days, within a radius of five kilometers. The ban also consists of the prohibition of the use, carrying and exhibition of any clothing, banner, flag and musical instrument that may characterize the presence of fans in the stadiums or in their surroundings.

According to the MPMG, chanting or any mention of fans inside the stadiums is also prohibited. The body recommends “that the regulations of future competitions prohibit the singing of chants and similar with mention of the two fans, under penalty of disciplinary sanctions for the clubs”.

After what happened on the morning of this Wednesday, the Blue Mafia, through social networks, took a position claiming to have acted in “legitimate defense” and said that it had been the target of an “ambush”. “Today an unfortunate event took place where we need to act in self-defense to defend the integrity of everyone who is present to follow the show later in Campinas, where Cruzeiro faces Ponte Preta”, he said in an excerpt from the publication.

The MPMG was contacted by the report and stated that it will manifest itself after the police forces are carried out and transferred to the institution. The report also tried to contact the Blue Mafia, by phone, but the calls were not answered.