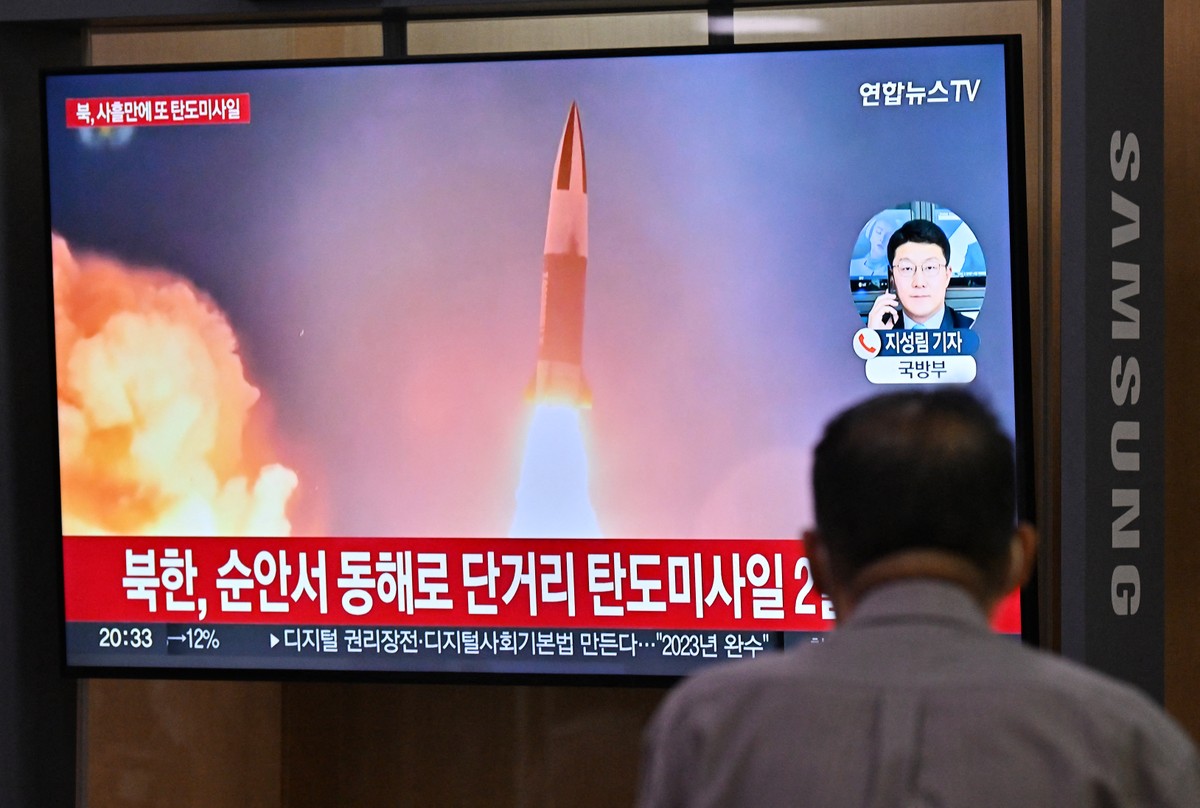 The North Koreans have launched a record number of missiles this year. South Korea’s intelligence service has already warned that the North Korean government is very close to announcing a new nuclear test.

The South Korean army said it had detected “two short-range ballistic missiles fired from Sunan in the capital Pyongyang”.

The Joint Chiefs of Staff in Seoul said in a statement that the country’s military had tightened surveillance and oversight, with a high alert state in coordination with the US.

The Japan Coast Guard also warned of the possible launch of a ballistic missile, based on information from the Japanese Defense Ministry, and urged attention to the vessels.

The US condemned the launches but said it was open to a dialogue with Pyongyang.

On Sunday the North Koreans had already taken a test.

North Korea expects US Vice President Kamala Harris to arrive in Seoul on Thursday. The trip will include a visit to the militarized border between North and South Korea.

The White House said Harris’ visit was a way of underscoring the importance of the alliance with South Korea.

Seoul is a crucial ally of Washington, which maintains 28,500 troops in South Korean territory to help the country protect against North Korea.

The US and South Korea have warned for several months that North Korean leader Kim Jong-un is preparing a new nuclear test.

Tunnel in the nuclear complex

On Wednesday, Seoul’s spy agency said Pyongyang appears to have completed “a third tunnel at the Punggye-ri nuclear complex,” congressman Yoo Sang-bum said after a meeting with intelligence officials.

North Korea will likely choose a time between the upcoming “Congress of the Communist Party of China on October 16 and the US midterm elections on November 7” for the next test, Yoo said.

The isolated communist regime has carried out six nuclear tests since 2006. The most recent, and most powerful of all, took place in 2017, in what Pyongyang presented as a hydrogen bomb, with an estimated power of 250 kilotons.

Seoul has also detected signs that the North is preparing to launch a ballistic missile from a submarine, the presidential office said on Saturday, a type of weapon Pyongyang last tested in May.

“Today’s launch demonstrates the North’s intention to take advantage of the Peninsula with a nuclear arsenal at its disposal,” said Kim Jong-dae of the Yonsei Institute, which specializes in North Korea.

The retest “anticipates Pyongyang’s aggressive stance next month, with missile launches and a possible nuclear test,” he said.