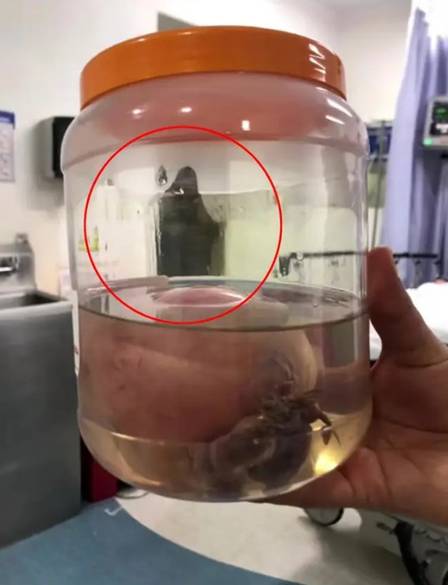 Doctor records ‘The Grim Reaper’ after surgery to remove uterus

A doctor this week shared a image taken after surgery clicked by a colleague in which, he says, the silhouette of the Reaper (or Death).

Jorge Bermejo Kawache Ortega showed the image on his TikTok account, where it went viral. On the net, many said frightened by the “phenomenon”.

A surgeon had just performed the hysterectomy when a picture was taken of them holding a vial containing the uterus removed from the patient.

But in the back of the operating room at Clínica del Noroeste, in Hermosillo (Sonora, Mexico), there are a mysterious shadow which looks a lot like the mythical being.

“Whether or not you believe in the paranormal and another plane surrounding us, I’ll leave you with something to ponder: all surgeons, upon entering an operating room, constantly struggle with death to restore people to health. Sometimes we win. , sometimes we lose. No matter how good a surgeon you are, death is always part of our work and it is always present”said the doctor, according to the website “Unilad”.

“A friend of mine in Hermosillo sent me a message saying ‘check out this photo real quick’. When I opened it, the first thing I saw was the jar, containing a uterus after an abdominal hysterectomy on a 50-year-old patient. The operation went very well. , without complications, and the patient was discharged the next day. The doctor took a picture of the organ in formaldehyde to show the patient’s family. And of course, the relatives saw the dark silhouette behind the vial and were like, ‘Oh my God. , what f… is this?’ They were very scared about it.”he added.

“When my friend sent me the photo, I just wanted to share it with my followers. It went viral very quickly here in Mexico but I didn’t expect that. However, the patient was discharged the next day and was fine so I don’t know , it was just a strange image”concluded George.

Followers of the doctor on the network wrote about the case and reported “paranormal” experiences:

“On the day my mother passed away, may she rest in peace, I spoke to her on Zoom and there was a black shadow next to her bed. And that night she left us.”