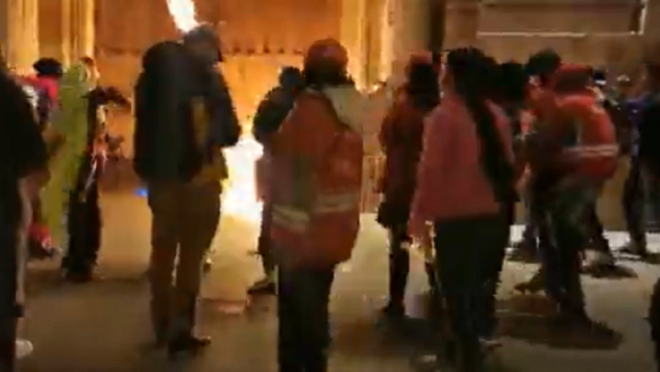 how the turn to the left naturalizes violence in the country

A group of abortionists tried to set fire to the Main Cathedral in Bogotá, Colombia, on Wednesday (28). Abortion up to the 24th week, authorized in February by the country’s Constitutional Court, was denounced and returned for analysis by the magistrates. Holding the Church responsible for this movement, protesters set fire to the cathedral.

The country has been governed for a little over a month by Gustavo Petro, Colombia’s first leftist president, who carries with him progressive agendas such as the decriminalization of abortion. In an interview with People’s Gazette, Colombian senator María Fernanda Cabal, from the opposition, said that violence against the Church and other institutions will be difficult to combat in the country from now on. The parliamentarian highlights that the authorities did not punish the aggressors, not even at the municipal level, through Mayor Claudia López, who is aligned with Petro.

“It will be difficult to fight this because we are under a socialist government, which is an atheist and sees these acts of vandalism as a sign of ‘freedom of speech,'” he observes. “I think this behavior obeys the 2030 agenda promoted by progressives, in addition to the much publicized ‘molecular revolution’ that always manifests itself with violence”, he comments.

Juan Camilo Restrepo, former High Commissioner for Peace, also spoke. “There are some barbarians who intended to burn down the Primate Cathedral of Colombia. We are ready to stand up for beliefs and institutions,” he tweeted.

Nicolás Gómez Arenas, a political scientist influential on social media, asked the mayor of Bogotá to clarify what happened, as the video shows that living managers do little to deter vandals from burning down the cathedral. “Why do the supposed managers of coexistence allow the door of the First Cathedral to be burned? Claudia López, what’s going on? To govern, to manage, to do something or to resign. This has nothing to do with free speech, this is pure vandalism,” he posted.

Since Petro assumed the presidency, on August 7, other leftist agendas have gained space and make it difficult to control violence in the country, generating criticism about the president’s conduct in the area of ​​security.

One of Petro’s other initiatives is to remove 70 generals and colonels from the Army and National Police, put limits on bombings against guerrilla groups and reform the Mobile Police Shock Squad (ESMAD), responsible for containing protests.

Weakening the fight against drugs

The Colombian government also wants to revolutionize the fight against drugs. After presenting a bill to legalize the recreational use of marijuana, Petro and his caucus intend to do the same with cocaine. “We will never achieve peace in Colombia until we regulate drug trafficking,” Senator Gustavo Bolívar, one of the signers of the marijuana bill, claimed in late August in an interview with CNN.

“We could, for example, make a small treaty in our countries to modify the 1961 Narcotics Convention and plant the world’s first legalization flag, and other countries could join,” Bolívar said.

With FARC support, Colombia also announced at the end of last month that it will give priority to manual eradication and voluntary replacement of coca crops in actions with communities.

Petro’s policy goes against the small but significant advances of recent years. The previous government declared earlier this year that the goal for 2022 was to manually eradicate 100,000 hectares of coca, a method that a year ago led to the eradication of 103,100 hectares of illegal cultivation.

The White House Office of National Drug Control Policy (ONDCP) said in July that Colombia produced 972 tonnes of cocaine last year, 2.2% less than an estimated 994 tonnes in 2020, and recorded 234,000 hectares. under cultivation, 4.5% below the 245 thousand hectares of the previous year.

Once again, the government’s initiative received criticism from the opposition. “Today we swim in drugs, but what will come of this decision? [fim da erradicação forçada de cultivos ilícitos] it will be a tsunami of drugs that will drown Colombia in more violence. We are going in the wrong direction,” tweeted opponent Federico “Fico” Gutiérrez, one of the opponents defeated by the leftist in this year’s presidential election.

Hand in hand with guerrillas

The location of illicit crops coincides with the territories where most social and indigenous leaders were murdered and with the presence of illegal armed groups, such as dissidents from the FARC, the National Liberation Army (ELN) and the Gulf Clan.

Proposals for peace agreements with guerrilla groups are also a priority for the Colombian government, especially the ELN. “We are repeatedly asking violent actors to accept our Total Peace proposal,” Petro announced earlier this month.

The ELN is a guerrilla group founded in the 1960s by students and leftist movements linked to the communist dictatorship of Fidel Castro in Cuba. It has a Marxist-Leninist ideological line and is one of the actors in the Colombian civil war that has been fought since then. Like other guerrilla groups, the ELN engaged in drug and arms trafficking, smuggling and illegal mining.

Talks with the ELN could lead to the same end as the FARC, which has split into groups that continue with criminal activities while others have political representation in the Colombian Congress. [com assentos reservados]such as the Comunes party.

In an interview with People’s Gazette, José Gustavo Arocha, a specialist in national security and a master in public administration from Harvard University, pointed out that it is wrong to consider that these initiatives will benefit, above all, peasants and drug producers. “It is a campaign that seems populist to me, because of the theme and for attracting attention, but without a doubt that not only the Gulf Clan, but also the ELN and the FARC would be the big beneficiaries if that happened”, highlighted Arocha.

Previous Itaú’s app is offline this Friday (30); there are problems logging in
Next Telecine: movie releases in October