Brazilian coach Gabriel “Turtle” experienced mixed feelings at Worlds 2022, the League of Legends World Championship, with Evil Geniuses (EG) winning over LOUD this Friday. He told, in an interview with ge (see the video below), having felt happiness and sadness at the same time, as he saw the North American team in which he is part of the coaching staff defeat the representative of Brazil.

Brazilian coach Turtle, from EG, in an interview at Worlds 2022 — Photo: Reproduction 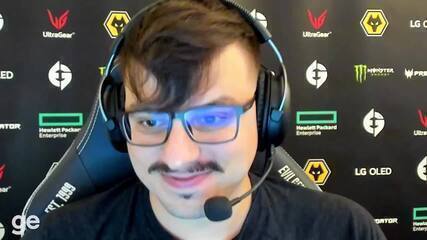 “It was the worst victory I’ve ever felt in my life, because I was left with a very bitter taste,” Turtle pointed out.

“I won, but I couldn’t even celebrate. I couldn’t say ‘wow, I won’, which I don’t usually celebrate, because, in addition to having very close friends at LOUD, I want to see Brazilians doing well. The victory in that game was very painful. I was very worried at first, that LOUD was winning. I was worried and happy at the same time. When we started to win, I was happy and worried because LOUD was losing. It’s a feeling I can’t describe. It’s a happiness and a sadness at the same time – said the coach.

Former LoL player, Turtle became a coach in 2019, still in the Brazilian Championship (CBLOL), and joined EG in December 2020 to work in the 2021 season as an assistant to British Peter Dun, the boss at the time. Turtle took over as head coach in 2022 and recently returned to his assistantship to let Earl “Rigby” take the lead in the South Korean’s last tournament before serving in the South Korean Army.

In 2022, EG played in the Mid-Season Invitational (MSI), LoL’s mid-season international championship, for the first time, but didn’t get to play against RED Canids Kalunga, the Brazilian representative in that tournament. This time, the draw put LOUD, champion of the 2nd Split of CBLOL 2022, in the path of EG. And the North Americans got the better of it, in a match in which the Brazilians even opened an advantage to win.

— I was very impressed with LOUD, the way they played the ‘early game’ [início de jogo]. Mainly the way they were playing the ‘top side’ [topo do mapa]. They made a few small mistakes, which cost the game. One of them was that ‘TP’ [teletransporte] in the ‘bot’ [rota inferior]. There was also a fight where Aatrox gave ‘TP’ and they couldn’t give ‘one shot’ [um ataque] at Aatrox. I think Croc missed the ‘ult’ [ultimate, habilidade mais potente de um personagem] from Wukong. It took a while to kill Aatrox. These little things made a big difference in the fights. The ‘cooldowns’ [tempo para uma habilidade ser usada de novo] that they spent and then fought again without the ‘ultimates’. These little things greatly affected the end result of the game, but other than that, I was very impressed. There was even a time when I thought we were going to lose, because we were having a ‘stomp’ [perder com grande diferença] in the ‘early game’. I was worried.

With the defeat, LOUD reached the second setback, with only one victory. With the 1st place of Group A no longer depending on itself, LOUD starts to prioritize the best-of-five series (md5) which, as well as the leadership of the group, qualify for the group stage. If they finish in 2nd place, LOUD expects the winner of the duel between the 3rd and 4th placed teams in Group B to compete for a spot. If you finish in 3rd or 4th, you will have to win a series md5 to play again, in md5, against the 2nd place in Group B by classification.

— It’s a much more difficult path — acknowledged Turtle, although he expressed confidence in LOUD going to the group stage, which would be unprecedented for a representative from Brazil.

On the other hand, the results of the second day of the EG encouraged the coach. In addition to beating LOUD, the North American team defeated Taiwanese Beyond Gaming and reached two wins and one loss – to European Fnatic – in the entry stage.

— Winning these two games relieves a lot, because we only lost to Fnatic. If we win the other games and Fnatic lose, we will be able to play ‘seed 1’ [1ª colocação]. It went really well! We are starting to pick up the rhythm of the championship now. You could see that we had a big improvement compared to yesterday’s game [quinta-feira], which was a shame. And now we’re much more packed and making the plays we usually do, communicating better, so it’s very good for us,” said Turtle.

This Saturday, EG will face the Chiefs (Oceania), in a game scheduled for 8 pm (Brasilia time). On Sunday at 7 pm, the opponent will be Detonation FocusMe.