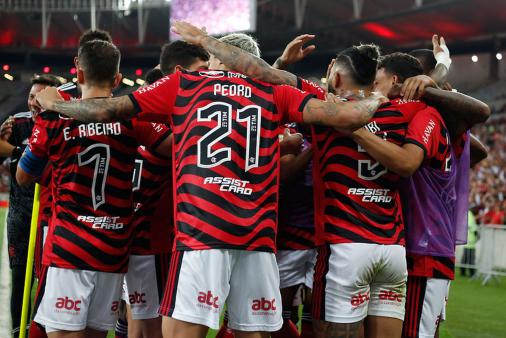 Pedro shines in the return of the Selection, and Flamengo thrashes RB Bragantino for the Brasileirão

The Brazilian team did well for Pedro. The striker shone in the return of Canarinho and was the protagonist of the 4-1 victory of the Flamengo on RB Bragantino this Saturday night, at Maracanã, in a game valid for the 29th round. Shirt 21 scored three goals, while Gabi scored the other one from Rubro-Negro. Helinho swung the nets for Massa Bruta.

+ VIDEO: Flamengo fans celebrate to welcome team in the game against RB Bragantino

With the result, Flamengo reached 49 points and climbed to 4th place in the Brasileirão. RB Bragantino follows with 35 and is in 14th place. Click here to see the Brasileirão table!

The teams return to the lawns next Wednesday. RB Bragantino measures forces at 19:00 against Cuiabá at Nabi Abi Chedid, while Flamengo faces Internacional at 21:30 at Maracanã.

IT’S NOT EVERY DAY…
The match started at a thousand. With four minutes, Lucas Evangelista lost the ball in midfield and Gabi ran out. The Flamengo striker had everything towards the goal, but was taken down by Luan Cândido inside the area. The referee signaled a penalty and expelled the RB Bragantino side.

In the charge, however, the striker of Rubro-Negro kicked the post, something that is not common for the player – it was only the 4th charge missed by him. For RB Bragantino, in any case, the damage was greater: Maurício Barbieri had to change the team even before 10 minutes to compensate for the expulsion.

REDEEMED YOURSELF!
It didn’t take long for Flamengo – and Gabigol – to get back on their feet. Even with the penalty missed, the crowd in the stands of Maracanã sang loudly and the team responded. Shortly thereafter, Arrascaeta found shirt 9 in the area. The striker, calmly, moved Cleiton and opened the scoring.

CLETON AVOIDS THE WORST FOR BRAGANTINO
One more player, an early goal, fans supporting… Perfect scenario for Flamengo to create. And it wasn’t for lack of attempts by Rubro-Negro. The team, however, stopped at Cleiton: the Bragantino goalkeeper made at least three great saves in the first half, which ended up 1-0 for the home club.

PAPERS ARE REVERSED
​With the pressure of the first, Dorival was bold and returned with Cebolinha in place of Thiago Maia for the second half. Little did he know that he would have a headache minutes later: Vidal took Artur down inside the area in one of Bragantino’s few attacks in the game, still in the first minute of the second half. In the penalty kick, Helinho moved Santos and tied.

IT’S SELECTION!
Tense moments marked Maracanã after Massa Bruta’s goal, but Flamengo remained firm in the attack. After an individual move by Cebolinha, shirt 11 crossed to Pedro, who needed just one touch to get ahead of the defenders and complete the back of the net, breaking the tie.

And the game turned from Pedro after the second goal. The gate opened and shirt 21 shone. Three minutes later, Flamengo arrived quickly on the right, Arrascaeta crossed and the forward scored with his chest. In the next move, the athlete took advantage of a hit inside the area to complete the beard, hair and mustache.

Flamengo even pressed and passed close to a fifth goal, but the rout ‘stopped’ at 4-1. It didn’t matter, Saturday in Rio de Janeiro ended with smiles and a red-black party at Maracanã.