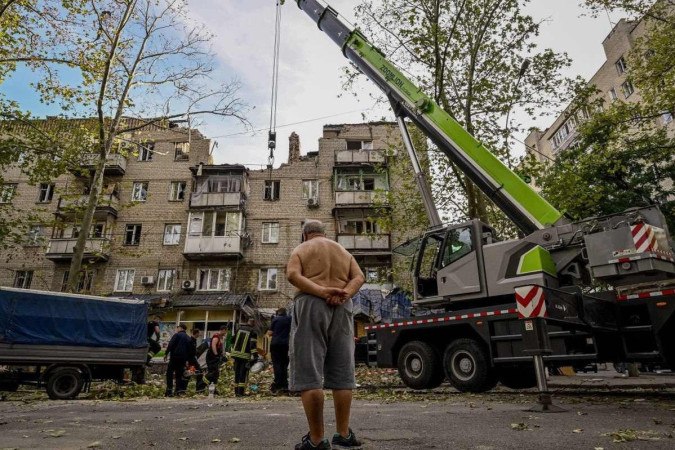 The first news was that Ukrainian forces had surrounded 5,000 Russian soldiers in the city of Lyman, in Donetsk – a region in the east of the country annexed by Vladimir Putin the day before. “We fly our national flag and place it on our territory. Lyman will always be part of Ukraine,” one of Kiev’s military said in a video. At almost the same moment, Moscow’s forces abandoned the locality. “Threatened with siege, Allied troops withdrew from Lyman to more favorable lines,” the Russian Defense Ministry said in a statement.

Faced with yet another victory on the front, Chechen leader Ramzan Kadyrov, a Kremlin ally, asked Putin to use the atomic arsenal. “In my opinion, we should take more drastic measures, such as the declaration of martial law at the border and the use of low-power nuclear weapons,” he said in a statement sent via the Telegram app. “There’s no need to make every decision with the Western community in mind.”

In an interview with the Courier, Peter Zalmayev — director of the NGO Eurasia Democracy Initiative (in Kiev) — assessed the situation as quite ironic. “On Friday, Putin had announced the annexation of 17% of Ukrainian territory. The annexed part has been disputed by the Ukrainians. Lyman is an important center for several reasons. It opens the door to the rest of the Luhansk region.” stated.

Zalmayev said he learned from sources in Lyman that a large amount of weapons and rockets had been seized by the Ukrainians. “The taking of Lyman is a sign that Putin does not trust his generals, who have proved themselves incapable. We learned that Putin has been making tactical decisions about the fighting in Ukraine; hence the result.”

Professor of comparative politics at Kiev-Mohyla National University, Olexiy Haran finds it curious that Russia does not have full control of Donetsk and, even so, has annexed the territory, in addition to Luhansk (also in the east) and Zaporizhzhia and Kherson (both in the southeast). “Administrative centers in Donetsk such as Kramatorsk, Sloviansk, Kostiantynivka and Druzhkivka are under Ukrainian rule. Now the Ukrainians have released Lyman. All ideas about a fake referendum and about annexations are symbols of Russian fragility,” he admitted to the report.

Haran does not hide his concern at the announcement of the arrest of Ihor Murashov, director of the Zaporizhzhia nuclear power plant, by Russian forces. “It is not known where he would be now. It is yet another unbelievable behavior by Russia towards nuclear targets. This creates a great danger for Europe and the world. Zaporizhzhia is the largest atomic power plant on the continent.”

A specialist in weapons of mass destruction at the United Nations Institute for Disarmament Research (UNIdir), Pavel Podvig reminded the Courier that Chechen leader Ramzan Kadyrov was not the first person to propose the use of nuclear weapons. “Russian analysts and journalists have even called for attacks of this type. It must be borne in mind that nuclear weapons have low military value. The idea that they would be a magic wand, that would solve problems, is wrong. This arsenal is not useful in the field.” battle,” he explained to the Courier over the phone from Geneva.

On the front, Ukraine has accused Russian forces of shooting 24 civilians, including 13 children and a pregnant woman, during an ambush on a convoy near Kupiansk, a city reconquered by Ukraine. “The Russians shot civilians at close range,” denounced the regional governor of Kharkiv, Oleg Synegubov.

Brazil abstained in a UN Security Council vote on a resolution condemning the annexation by Russia. Former president Luiz Inácio Lula da Silva used Twitter to comment on the fact: “The only position that interests Brazil on the issue of Ukraine and Russia is peace.”

(FILES) In this file photo taken on December 8, 2018 Head of the Chechen republic Ramzan Kadyrov attends the plenary session at the United Russia Party’s 18th convention in Moscow. The US State Department placed Chechen Republic leader Ramzan Kadyrov on its blacklist of human rights violators on July 20, 2020 for alleged torture, extrajudicial killings and other violations it said go back more than a decade. / AFP / Kirill KUDRYAVTSEV
Photo: KIRILL KUDRYAVTSEV

“On Friday, the UN Security Council voted on a resolution condemning the so-called annexations and demanding that Russia leave Ukrainian territory. Russia vetoed the text. Interestingly, China and Brazil, unfortunately, declared their abstention. I remember that Brazil voted in favor of a resolution in March denouncing Russian aggression. We hope that Brazil will continue to support Ukraine’s territorial integrity.”

“It is important to send a signal condemning the use of nuclear weapons and to make sure that the international community is united in this position. Brazil has a role in this. In June, the countries that are part of the Treaty on the Prohibition of Nuclear Weapons issued a statement condemning any kind of nuclear threat. Brazil signed the agreement and ratified it, but it did not become a formal part of the declaration. It will be very important for countries like Brazil, India and China to make their declaration very clear that any threat of use of a nuclear weapon is unacceptable.”

Previous The impact of the NASA mission that changed the course of an asteroid
Next 10 Sony-Owned Characters That Should Enter the MCU » Movie News, Movie Reviews, Movie Trailers, TV News.