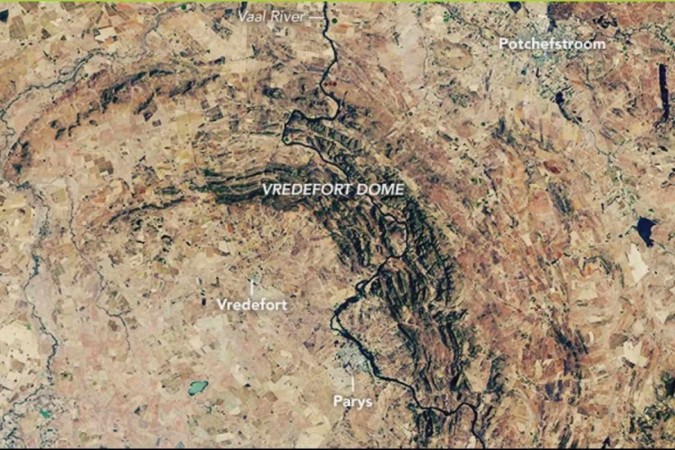 The biggest asteroid to hit Earth was 25 kilometers wide

Before the existence of trees, when Earth was inhabited only by single-celled organisms, the largest asteroid to ever hit our planet crashed near what we now know as Johannesburg, South Africa, forming the Vredefort Crater. The information is from IFL Science.

With an estimated crater size of between 250-280 kilometers after the first impact, the asteroid’s size was originally calculated to be around 15 kilometers in diameter. However, new research from the University of Rochester suggests the recalculated size is closer to 25 kilometers.

The team used a collision physics program called Simplified Arbitrary Langrangian Eulerian (iSALE) to calculate the size of the asteroid needed to create a Vredefort-scale impact.

They found that the original diameter estimate would yield an impact site measurement of about 172 kilometers. To get to the actual figure of 250-280 kilometers, the impact would have to be much greater.

Estimates of the effect this impact may have had on Earth’s environment can be drawn from what we already know about the consequences of the Chicxulub impact.

Considered to be the cause of the mass extinction of the dinosaurs, the Chicxulub crater was created by a 10 kilometer asteroid that destroyed 75% of the plant and animal species on Earth 66 million years ago.

Luckily for all living things, there weren’t many about 2 billion years ago. While not the cause of a mass extinction event, it is believed that the Vredefort impact could have a greater effect on the global climate than the Chicxulub impact.

The large amounts of dust created by the asteroid’s collision could block the sun, in a period between hours and decades. This could cause the Earth’s surface temperature to cool considerably. As the dust settles, the carbon dioxide emitted by the impact could, in turn, cause the planet’s temperature to rise by several degrees.

Impacts of this size and time period are significant for furthering our understanding of the Earth’s geographic layout 2 billion years ago.

By studying material ejected from the Vredeford crater, the researchers were able to match samples with those collected from present-day Karelia, Russia. They estimated the distance of the two land masses to be about 2,000 to 2,500 kilometers at the time of impact.

In addition to helping to better understand what the planet was like 2 billion years ago, information gathered from impacts of this size allows researchers to study the effects of other large planetary impacts and estimate the potential effects of future collisions.

The study was published in Journal of Geophysical Research: Planets.

Previous How to use Google TV on Android or iOS smartphone?
Next “A Mulher Rei” leads Brazilian box office for the second week