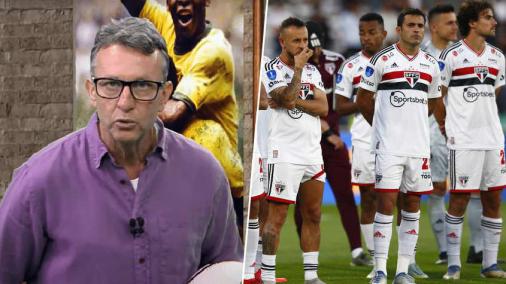 Neto detonates São Paulo after defeat in the Sudamericana and asks Ceni: ‘Why didn’t you resign?’

+ Is there a Del Valle? São Paulo suffers from memes after runner-up in South America

– Bunch of little player. If there’s a malemal player (sic), it’s Calleri, even though he’s expelled. You don’t represent São Paulo’s shirt, you don’t know what São Paulo is – fired the journalist.

Subsequently, Neto criticized former members of the club’s board.

– Do you know what you have to do? A general clean. It was left by you (the cast), Leco (Carlos Augusto, president of São Paulo between 2015 and 2020), by you Raí, who now stays with Kleber Leite in the Brazilian National Team in Paris. Cool, huh,” he said.

The Corinthians player, who said he had enormous respect for São Paulo, returned to address the club’s players.

– You have no shame in that wooden face of losing to Independiente del Valle and everyone making fun, including me – Said the Corinthians.

The presenter also criticized the coach Rogério Ceni who, in his opinion, should leave the position.

– Why did Rogério Ceni not resign after the game? Why isn’t he male? Do you know why? Because he thinks about the money, the status – he questioned.

With the defeat in the South American final, São Paulo will need a turnaround in the final stretch of the Brasileirão to get a spot in the next Libertadores.

Previous After being abandoned, refugee who fell in love with Brit decides to return to Ukraine – News
Next Natalie Portman’s TV Series Stops Filming After Shooting Threats