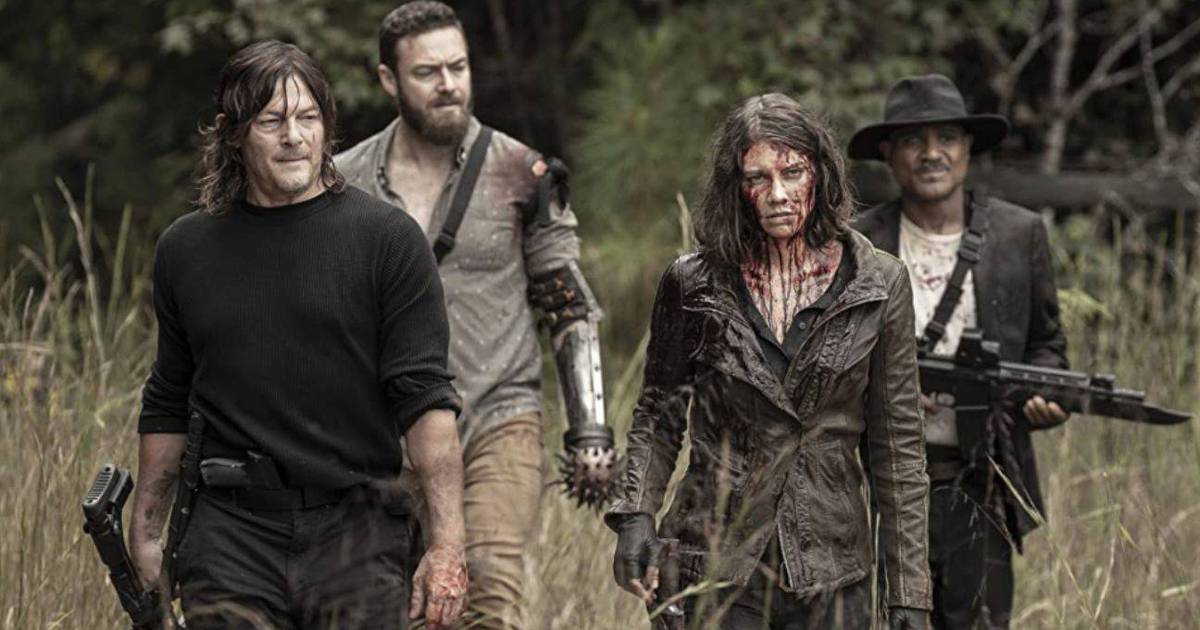 The Walking Dead returned last Sunday (2) with the premiere of the last part of the 11th and final season in the best style of the series: with lots of action, curses, blood and a fantastic cliffhanger. With Daryl (Norman Reedus) and Maggie (Lauren Cohan) separated, Carol (Melissa McBride) and Negan (Jeffrey Dean Morgan) united in a mission within the Commonwealth and Hornsby (Josh Hamilton) ordering them to be shot, the plot took on a very welcome intensity. Despite very convenient moments, it is visible how the series has returned with quality, and that solidity is especially important now, when each episode has real impacts on the conclusion of the series.

“Lockdown” set the farewell mood as soon as the new opening began. Longer than the first two parts of the final season, the section featured an unprecedented logo, replacing the then-traditional slime with dripping blood. I mean, if anyone had doubts that the risks are great in this final stretch, the series made a point of emphasizing them here. The episode also started with Judith reminiscing about the trajectory of our protagonists, while flashbacks took over the screen. Yes, they are appealing heavily to our nostalgia.

But just as importantly, “Lockdown” opens with the direct consequences of the previous episode, “Acts of God,” in which Daryl, Maggie, Aaron (Ross Marquand), Negan and Gabriel (Seth Gilliam) flee Hornsby and a large troupe of rangers. This entire sequence was intense, both for the cat-and-mouse game between the groups, and for the realization that Negan has, in fact, become someone who enters the game without many reservations. If before, when he was chosen for a mission, he was the target of crooked looks and suspicion, this time it was easy, almost as if he was REALLY part of the group.

Increasingly cornered by the opposing group, losing soldiers and even getting shot at, Hornsby’s desperation only grew as the episode progressed. No wonder, perhaps “Lockdown” was the episode in which actor Josh Hamilton screamed the most in the series so far, a crescendo that was good to follow. Another highlight on this side of the conflict was the car chase between Negan and Commonwealth soldiers. More than a good scene, it brought freshness to The Walking Dead by indicating how this season continues to be daring, allowing itself to take risks in narrative formats not yet explored.

While all this was going on, the community was crying out for justice after Connie (Lauren Ridloff) and Kelly (Angel Theory) published in the newspaper what Sebastian (Teo Rapp-Olsson) did with the locals. A riot then broke out, asking for the head of Governor Pamela Milton’s son (Laila Robins).

This snippet missed some viewers who, confused, couldn’t remember who April was (Wynn Everett), or what had happened. But, overall, this story brought an interesting subtlety, which speaks a lot to our present, that is, the couple who calmly buy ice cream while antagonizing the protesters, as if they didn’t understand their gravity and their motives.

Apparently apart from all this was Carol. She took care of the children in the group until she noticed a strange movement heading towards them. Despite her suspicions, she wasn’t sure Hornsby had sent the goons after them to use them as a bargaining chip with the “rebels” in the community, and she stood by. However, its plot eventually merged with the main one with the arrival of Negan, who at the behest of Daryl warned the other protagonists about what was happening outside the walls — and, here, it is worth mentioning how interesting it was to watch the interaction between he and Mercer (Michael James Shaw).

Thanks mainly to Stephanie (Margot Bingham), Mercer had his blind allegiance to the community tested again. In helping the protagonists, he turned his back not only on his duty, but also on what he had long believed to be his principles. And if there’s one thing Negan understands well, it’s how to throw principles into the air. Once again they are almost 100% opposite characters that come together in a certain way to do the right thing.

Mercer also went so far as to tell Rosita (Christian Serratos) that if she needed help getting out of the community for some reason, he would be there. The bond that has formed between them has definitely gone beyond work, it’s practically a friendship, as if he feels they are more alike than they appear.

Together, Carol and Negan pursue a plan B – and C – to help their friends. With the site plans in hand, they got a tactical advantage in an escape plan and, still, found the community’s number 1 enemy at the moment: Sebastian, who in fact was hiding even from his own mother. Carol cleverly convinces him to go with them to another location, and Negan fires praise at her.

Carol then uses Sebastian as a trump card to make some sort of deal with the Governor to save her friends from Hornsby’s hands. She’ll likely make Lance the orange for the governor’s son’s crimes while he leaves with a clean slate to the public.

Something that bothered was the chase scene of Hornsby’s henchman who was running after Jerry and the children. How could he not see the people who were two meters in front of him? How could he not see while they were on the emergency stairs in the building? How did he just give up and walk away when that was literally his mission? Many questions, few answers.

But overall it was a great comeback episode. Betting on nostalgia and action, The Walking Dead officially enters the countdown. We hope that the last episodes of the series follow this: frantic moments with a good political plot and without fear of being happy!

The Walking Dead is shown weekly on Star+.

Previous US, South Korea simulate aerial bombardment after North Korea launches missile over Japan – News
Next Grêmio starts decisive week at Arena with a mission to forward access to Serie A | Guild