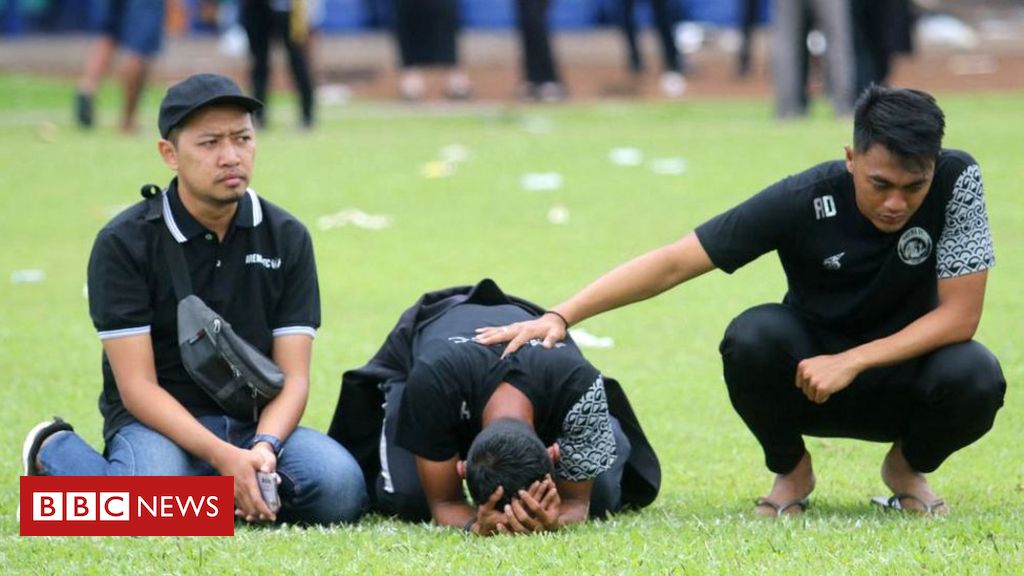 Tragedy in Indonesia: Fans were crushed and died in the arms of players during stadium riot

Football fans “died in the arms” of players during a riot at the Kanjuruhan stadium in Indonesia, the home team’s coach said.

Javier Roca said the tragedy at the match in Java, in which at least 125 people lost their lives, had left him “mentally shaken”. The number of children killed in the melee rose to 32.

About 18 police officers are being investigated after police fired tear gas at fans who stormed the pitch as the match ended.

The police chief of the city of Malang, where the game was played, was fired. At least nine other officers were suspended.

More than 320 other people were injured as fans were trampled and suffocated as they fled the gas. Indonesia’s Deputy Minister of Children’s and Women’s Affairs said the children were between three and 17 years old.

An eyewitness told the BBC that police fired several gas shells “continuously and rapidly” after the situation with the crowd became “tense”. Supporters of home team Arema FC took to the pitch as the game ended in a 3-2 defeat to rivals Persebaya Surabaya.

A witness, Chandra, told the BBC that a “sea of ​​smoke” in the stands caused instant panic among spectators. “Children were crying, women were fainting, screams were heard everywhere, everyone came out in droves,” he said.

Another supporter, Eko, said he was unable to get out of the grandstand doors due to the number of people trying to flee.

“I went back to the top of the stands with my friends. Then I used a scarf to protect myself from the smoke. Then I jumped on the field and went down through the side door,” he said.

“I asked her not to watch the game that day. She didn’t come home, in the morning her friends were looking for her,” Andayanengtyas said. “We looked for her at the ER, but she wasn’t there. The hospital told us to look at the morgue. The confusion happened because my daughter didn’t bring her ID.”

Other witnesses reported hearing parents shouting “where is my son?” amid the chaos, and a man told the BBC he saw parents passing out while protecting their children.

“A mother fainted while hugging her son, next to her the boy fainted,” he said. “Then some fans took the mother and the boy out of the stadium. They were taken unconscious – maybe because of the tear gas.”

Muhamad Dipo Maulana, 21, who was at the match, told BBC Indonesia that after the game was over, some Arema fans took to the pitch to protest against the home team players, but were immediately intercepted by the police and ” beaten”.

More spectators took to the field in protest, the fan said.

“Police acted with dogs, shields and soldiers,” Dipo told the BBC. He said he heard more than 20 tear gas shots at spectators in the stadium.

Police spokesman Dedi Prasetyo told reporters the officers under investigation “were responsible for holding” the weapons and said they were being questioned by an internal affairs team.

He added that several other officials, including the field security team, and some Indonesian football league officials, are also under investigation.

Indonesia’s human rights commission said it will conduct its own investigation into the disaster, and President Joko Widodo has ordered all Indonesian major league games to be stopped until the official investigation is carried out.

Amnesty International said the police response was “use of excessive force by the state” to control an unarmed crowd, and protesters in the capital Jakarta on Sunday night carried signs that read “no more police violence”.

Indonesian police had previously been criticized for the frequent use of tear gas in crowded stadiums.

Meanwhile, Arema FC coach Roca told Spanish broadcaster Cadena Ser that he thought “the police had crossed the line” in their efforts to control the crowd.

The announcement of the investigation comes after FIFA, world football’s governing body, called the disaster “a dark day for everyone involved in football and an incomprehensible tragedy”.

FIFA’s own regulations say that no “crowd control gas” should be carried or used by stewards or police at games and the body has requested a report on the incident to the Indonesian football federation.

Security Minister Mahfud MD wrote on Instagram that the stadium was overcrowded, with over 42,000 tickets sold for a capacity of 38,000 people.

“It became anarchic. They started attacking police, they damaged cars,” said Nico Afinta, chief of police in East Java, adding that two police officers were among the dead.

“We would like to emphasize that not everyone was anarchic. Only about 3,000 took the field,” he said.

The fleeing fans “left to a point at the exit. Then there was a crowd and people were breathless, suffocated,” the official added.

Previous A moving, Oscar-worthy performance propels American history
Next Elizabeth Olsen Reacts to Wolverine’s Arrival and Possibility of the X-Men in the MCU ~ Marvel Universe 616