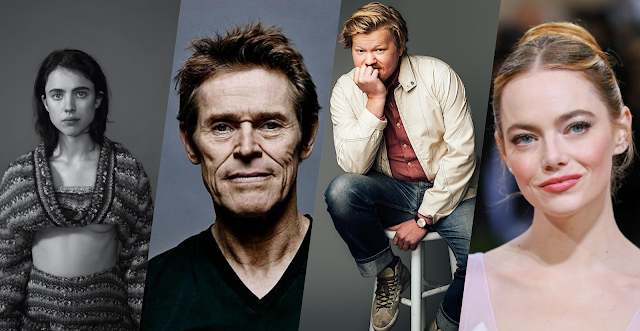 THE Searchlight Pictures announced Oscar®-winning actress Emma Stone (“La La Land: Singing Seasons,” “The Favourite”); Jesse Plemons (“Attack of the Dogs”), Oscar®-nominated actor; Willem Dafoe (“At Eternity’s Gate,” “The Florida Project”); and Margaret Qualley (“Once Upon a Time in… Hollywood”) star in the next film: “AND”, by Yorgos Lanthimos (“The Favourite”, “The Lobster”).

From a screenplay developed by Element Pictures and Film4, and written by Lanthimos and Efthymis Filippou (“The Lobster,” “The Sacrifice of the Sacred Deer”), “AND” is a production by Ed Guiney and Andrew Lowe of Element, along with Kasia Malipan and Lanthimos. Film4 co-funded the project, which will begin shooting in New Orleans in October.

“Working with Yorgos remains especially important to us at Searchlight, and this is another truly original project, which is what sets his work apart,” said Searchlight Presidents David Greenbaum and Matthew Greenfield. “Working again with Emma, ​​Jesse, Willem and Margaret, as well as Element and Film4, is the icing on the cake.”

“This is our fifth film with Yorgos and we are delighted to be teaming up again with Searchlight Pictures and Film4 to work on this excellent script by Yorgos and Efthymis. Yorgos has assembled an amazing cast and we can’t wait to get started on production,” said Ed Guiney and Andrew Lowe of Element.

The film marks another reunion for the filmmaker with Element Pictures, Searchlight and Film4 following their collaboration on the Oscar®-winning film “The Favourite” (2018) and “Poor Things,” which is currently in post-production. “AND” is overseen by Vice President of Production Richard Ruiz and Director of Development and Production Peter Spencer, who report to Heads of Production and Development Katie Goodson-Thomas and DanTram Nguyen. Film4 director Ollie Madden; the head of development, Ben Coren; and production and development executive Alice Whittemore will oversee production for Film4.

Yogos Lanthimos has directed some of the most acclaimed films of the past decade, including “The Lobster” (2015), which was nominated for an Oscar® in the Best Original Screenplay category, and “The Sacrifice of the Sacred Deer” (2017), both produced by Element Pictures. In addition, his feature film “Fangtooth” (2009) won the Un Certain Regard award at the 2009 Cannes Film Festival and was nominated for an Oscar® for Best Foreign Language Film in 2011.

For Emma Stone, this project also marks a reunion, after “The Favourite,” for which she was nominated for an Oscar® for Best Supporting Actress. The actress previously starred in Jonathan Dayton and Valerie Faris’ film War of the Sexes (2017); and “Birdman (or the Unexpected Virtue of Ignorance)” (2014), by Alejandro G. Iñárritu – all Searchlight films. She also won the Academy Award® for Best Actress for her performance in Damien Chazelle’s “La La Land: Singing Seasons” (2016), will also star in “Poor Things”, and will lead and produce, through her Fruit Tree imprint, of the series “The Curse”, with Showtime and A24.

Jesse Plemons was recently nominated for an Academy Award® for Best Supporting Actor for his performance in Jane Campion’s “Attack of the Dogs” (2021). He previously starred in Scott Cooper’s “Dark Spirits” (2021) for Searchlight; “Jungle Cruise” (2021) and “Judas and the Black Messiah” (2021).

Margaret Qualley, meanwhile, starred in Claire Denis’ “Stars at Noon” (2002), and other critically acclaimed film credits include Benedict Andrews’ “Seberg Against All” (2019); and “Once Upon a Time in… Hollywood” (2019), by Quentin Tarantino.

Lanthimos is represented by CAA; and Stone is represented by Anonymous Content, WME, Johnson Shapiro Slewett & Kole and The Lede Company. Plemons representatives are TalentWorks and Hirsch Wallerstein Hayum Matlof and Fishman; and Dafoe’s are WME and Circle of Confusion. Qualley is represented by UTA and Sloane, Offer, Weber & Dern.