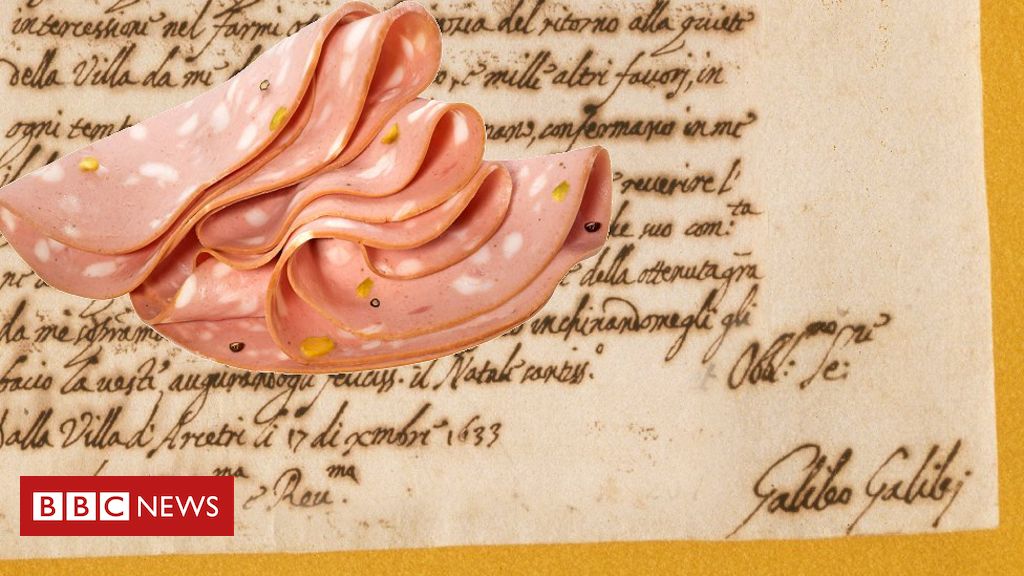 How Galileo’s manuscript Galilei ended up becoming a bologna wrap

Life presents surprises, but there are few like the one the intellectual Giovan Battista Clemente Nelli had in the spring of 1739.

There is more than one version of what happened, and the details vary. So let’s stick to the story told by the doctor Giovanni Targioni Tozzetti, great naturalist and scientist trusted by the Grand Duke of Tuscany.

Your version appeared in your text News of the extensions of the physical sciences produced in Tuscany throughout the year 60 of the 17th centurypublished in 1780.

“The famous doctor Gio Lami, by habit, went to dinner in one of his villas, at the Osteria del Ponte delle Mosse, with several friends. One of these friends was Nelli, later a senator and gentleman, and Lami asked him to bring bologna from the Cioci’s store, because it was the best of all”, says Tozzetti, in the text.

“He bought two lire of bologna. Arriving at the tavern, they asked for a plate to put the bologna on. And at that moment, Senator Nelli realized that the paper used by Cioci to wrap the bologna was a letter from Galileo.”

Nelli recognized the handwriting of Galileo Galilei, one of the greatest scientists in history.

The controversial hero who, among other things, turned telescopes into telescopes, which allowed him to discover new and unimaginable facts until then.

Galileo questioned Aristotle’s view of the cosmos, which placed the Earth as the center of the Universe, accepted as the only truth by the intelligentsia of the time.

Despite his commitment to scientific truth, his defense of the Copernican planetary system (with the Sun at its center) brought him into serious conflict with the Catholic Church.

A trial for heresy and the threat of torture forced him to publicly recant, and he spent the rest of his life under house arrest.

However, not even the powerful Inquisition prevented his brilliant work, with its revelations and conclusions, from succeeding in revolutionizing knowledge.

Today, 380 years after Galileo’s death, scholars can still consult Renaissance treatises by reviewing ideas he wrote in his own handwriting in notebooks, documents and letters.

But, as Nelli realized that spring day in Florence, an important part of that legacy was in danger of being lost, and not because of any auto-da-fé of any inquisition, but because of sheer neglect.

Vincenzo Viviani was Galileo’s last disciple and took care of him until the end of his life.

Afterwards, Viviani dedicated herself to preserving and defending Galileo’s image and work.

“Mr. Viviani collected, both from Galileo’s heirs and others, as many works of his master as he could find”, says Giambatista Venturi in Memorie e lettere inedite fina or disperse by Galileo Galilei (1818-1821).

“But to save them from the inquisition of the intolerant people, as he himself was suspected of being a person of no religion, he kept the works hidden at home in a well where he stored wheat.”

Among these treasures was “a manuscript by Galileo in several small booklets titled on the title page as ‘De Motu Antiquiora’, which is recognizable as one of his earliest studies of his youth,” Viviani wrote in 1674.

In it, highlighted the mathematician and scientist, “it can be seen that from that moment onwards he could not force his free intellect to philosophize conventionally in ordinary schools”.

When Viviani died in 1703, the fate of the “little books” became uncertain.

The house in which they were hidden “was inherited by the abbot Jacopo Panzanini, Viviani’s nephew. And with his death in 1737 the well was opened and many packages of the aforementioned writings were moved or sold to merchants for wrapping”, says Ventury.

And he adds “quidquid chartis amicitur ineptis”, which means something like “any card is a friend of idiots”.

Let’s go back to that table of friends where Nelli had just realized that the bologna she had bought was wrapped in a letter written by Galileo.

Aware of the importance of the find, Targioni Tozzetti says that “he removed the fat from the sheet with a napkin as best he could, then folded it and put it in his pocket”.

He said nothing to anyone, and as soon as he could, “he ran to Cioci’s shop, from whom he knew that from time to time an unknown man sold a bundle of these writings.”

He bought all the writings in the shopkeeper’s possession and made him promise to let him know if more copies came his way.

“In fact, a few days later a larger package arrived, and the senator learned that they were coming out of a well. Then in 1750 he managed to get his hands on all the rest of the treasure.”

The sellers were Viviani’s great-nephews, who had inherited her house after Panzaninni’s death and who, despite the fact that that same year Galileo was finally considered respectable enough to receive a tomb in a church, they did not share the his great-uncle’s respect for the great scientist.

They emptied the cupboards where Galileo’s disciple had kept the manuscripts to put them to a use that seemed to them much better: storing tablecloths and bed linen – and they looked for a way to make money from the “useless papers”.

No one knows how much was lost, but when Nelli showed up, they still had a large trunk full of documents, which they sold to the senator.

According to Targioni Tozzetti, “Senator Nelli, having purchased the manuscripts, reorganized the material and studied them. As he was once kind enough to tell me, he wrote an extensive and rational biography of Galileo and his most distinguished disciples, to be printed along with many of his posthumous works and letters”.

He didn’t get everything he wanted, but he published Galileo’s Literary Life and Commerce in 1793, printed in Florence, but falsely indicating that it had been in Lausanne, for fear of ecclesiastical censorship.

The work reconstructs the biographical facts of the great Florentine scientist since his youth through a rigorous analysis of a considerable number of letters, many of which related to the publication of the Sidereus nuncius (first scientific treatise based on astronomical observations made with a telescope) and the Inquisition process.

After his death that same year, Venturi continued his work and, finally, the treasure Nelli found when buying bologna ended up in the Florence Archives.

There they were used by the greatest of all Galileo scholars, Antonio Favaro, who between 1890 and 1909 produced the monumental Edizione Nazionale of Galileo’s works: 20 volumes printed in 21 large tomes that are an indispensable reference for researchers on the subject. scientist background.

Previous What to put in WhatsApp Message? See 4 Tips That Can Help | Social networks
Next Agenda to Postpone the End of the World (5 to 12/10)