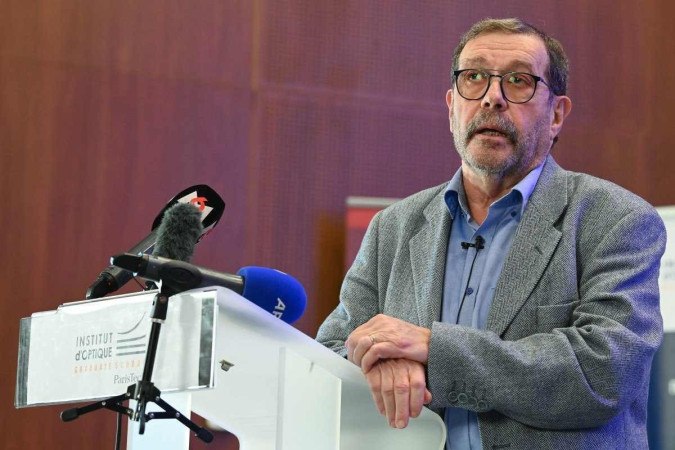 They took quantum mechanics out of the purely theoretical field, pointing out ways in which this strange subatomic world is revolutionizing technology. Thanks to research by Frenchman Alain Aspect, 75, American John Clauser, 79, and Austrian Anton Zeilinger, 77, supercomputers with unparalleled speeds, ultra-precise sensors and encryption systems that are impossible to circumvent are under development.

The discovery of a mechanism called quantum entanglement, by which two particles are perfectly associated, regardless of the distance between them, earned the trio the Nobel Prize in Physics, announced yesterday by the Swedish Academy of Sciences. According to the Nobel Committee, the award is justified by the fact that the laureates have “performed innovative experiments using entangled quantum states, in which two particles behave as a unit, even when they are separated”.

Theoretically predicted, the property of subatomic elements to behave as one perplexed none other than Albert Einstein. A classic metaphor to explain quantum entanglement asks you to imagine two boxes each containing a coin. If someone in the Northern Hemisphere plays heads or tails and the result is heads, over in the Southern Hemisphere the other will instantly come up tails.

It sounds like fiction, but the experiments of Aspect, Clauser, and Zeilinger have shown that not only is it perfectly possible, but — contrary to what many mystics want — there is nothing esoteric about it. In 2019, using the knowledge of the trio, Scottish scientists from the University of Glasgow captured, for the first time, the phenomenon in four images of photons (subatomic particles) in different phase changes.

“It’s not like the Star Trek movies or anything,” Zeilinger said at a press conference. “But the point is, using entanglement, you can transfer all the information that is carried by an object to some other place where the object is reconstituted,” she explained. The Austrian’s research is dedicated to quantum teleportation. In the interview, the physicist modestly stated that he did not expect the award. “I was very surprised to get the call,” he said.

In 2010, Zeilinger and John Clauser won the Wolf Prize for advances in quantum teleportation research. Clauser is responsible for developing, in practice, the ideas of the Irishman John Bell, who developed the most important theorem of quantum physics. According to the Nobel Committee, “some gaps remained after John Clauser’s experiment”, and it was up to the Frenchman Alain Aspect, also through experiments, to close this gap. The professor at Paris-Saclay University thanked the Nobel and attributed “part of the merit” of the discovery of quantum entanglement to Albert Einstein.

“It has become increasingly clear that a new type of quantum technology is emerging,” said Anders Irbäck, chairman of the Nobel Committee for Physics, on the prize’s website. “We can see that the laureates’ work with entangled states is of great importance, even beyond the fundamental questions about the interpretation of quantum mechanics.”

According to the doctor of physics Enrique Solano, who founded two quantum technology companies in Spain (Kipu Quantum and Quanvia), if in 1900 Einstein, Max Planck, Erwin Schrödinger and Werner Heisenberg established the quantum theory, “with Aspect, Clauser and Zeilinger, an era of quantum information experiments begins, the association of the principles of quantum physics with information processing arrives, and with it, quantum computing”. Due to the phenomenon of quantum entanglement, “it is conjectured that very soon, in five years’ time, we will have quantum computers capable of calculations in subseconds that, with today’s supercomputers, would take thousands of years.”

“We are talking about a branch of theoretical physics that has moved to quantum technologies, a business so well established that governments in Europe, Asia and the United States are investing thousands of euros in it, and there is already a global market around them,” continues Solano. Google, IBM and Intel are some of the companies that invest in quantum computing.

“With their pioneering experiments in quantum entanglement, Aspect, Clauser and Zeilinger have brought quantum mechanics from its philosophical beginnings — which stretch back nearly a century — to the present day,” comments Penelope Lewis of the North American Institute of Physics. “Their experiments laid the groundwork for incredible advances in quantum computing and cryptography, technologies with the potential to transform the modern world. It’s a magnificent way to connect the past, present and future of applied physics.”

“Quantum mechanics contradicts many of the everyday ways we perceive the world around us. Yet experiment after experiment over the years — notably those of today’s (yesterday) laureates — have demonstrated not only the fundamental applicability of the theory, but its tremendous power. Perhaps the most transformative application is quantum computing, which opens our access to complex calculations efficiently and quickly. Over time, real-world applications can include faster drug and vaccine development, improving the efficiency of batteries, increase the accuracy of weather forecasts, and protect data with quantum encryption, among others.”

If the reader is struck by the concept of quantum entanglement, he is certainly not alone. The genius Albert Einstein questioned the phenomenon and described it as “terrifying”. Even today, many physics graduates cannot understand the phenomenon, Chris Phillips, a physicist at Imperial College London, told AFP.

Entanglement or entanglement is a mechanism in which two quantum particles are perfectly correlated, regardless of the distance between them. For example, a photon (particle of light) that passes through a special glass to give rise to two photons. These two resulting particles “do not have the same color as the initial one, but are entangled because they arose from the same photon,” explains Phillips. “If you measure one of these photons, the other will be instantly affected — no matter how far apart they are.”

Phillips found this “extremely strange” phenomenon in his lab, where he works with two entangled photon beams. “If I put my hand on one of these beams, something instantly happens in the other beam across the room: a needle moves that records the phenomenon.”

The fact that something can happen simultaneously, even over great distances, invalidates the so-called “locality principle”, according to which something that happens in one place should not affect what happens in a distant place. In 1964, Northern Irish physicist John Stewart Bell developed a theory to see if these “hidden variables” that so worried Einstein existed. But laboratory experiments were lacking. This is what French physicist Alain Aspect achieved two decades later. He proved that two “entangled” light particles affect each other, instantly, repeatedly.

In an interview with the Nobel, Aspect confessed that, after all these years, he still has difficulty accepting the “mental image” of this principle “which is something ‘totally crazy'”. His award-winning colleagues, the Austrian Anton Zeilinger and the American John Clauser, also tested Bell’s theorem and came to the same conclusion: the phenomenon can only be explained with this principle of “non-locality”.

The great mystery, however, remains 100 years after Einstein: Why does this phenomenon occur? “We have to be humble about physics,” explains Chris Phillips. “It just exists.”

Born in 1942, in the United States, and in the 1960s, he decided to study John Bell’s quantum theories. Clauser believed he could test Bell’s ideas in a laboratory, but leading physicists of the day responded with contempt. He proposed the test independently of his radio astronomy thesis and performed it with collaborators in 1972 while at the University of California at Berkeley.

Born in 1947 in France, he is currently a professor at the Paris-Saclay University and the Ecole Polytechnique. Interest in the quantum world began with a book written by Claude Cohen-Tannoudji on the subject (Cohen-Tannoudji won the Nobel in 1997), which in turn led him to John Bell.

Nicknamed the “quantum pope”, the physicist Anton Zeilinger, born in 1945 in Austria, became one of the most famous scientists in his country when he succeeded, for the first time, in 1997, in the quantum teleportation of light particles. Using the properties of quantum entanglement, he encrypted the first banking transaction by this means in Vienna in 2004.

Previous Nubank application down this Wednesday (5); find out why – Technology and Games
Next “No! Don’t Look!”, “Bullet Train” and more films are featured on Claro tv+

Defeated in Iraq and Syria, the Islamic State group announced on Wednesday (30) …