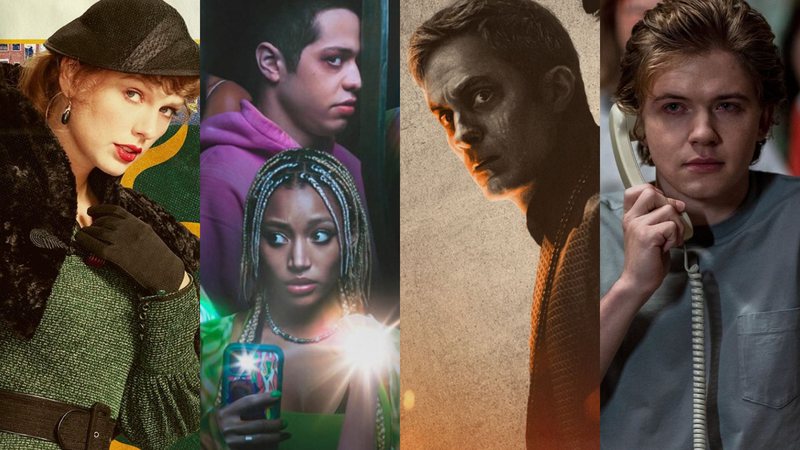 CineBuzz has prepared a list of the main releases in theaters, TV and streaming this week

If you fool around in this first week of October, a novelty passes in front of you and you don’t even see it. It’s just that, between the 3rd and 9th, several new movies, new series, documentaries, realities and specials arrive in theaters and streaming platforms in droves. However, if you don’t want to miss anything, count on us, because we, here in CineBuzzwe already have the list of premieres ready for you.

One of the highlights on the big screen is “Amsterdam”, which has an all-star cast like Margot Robbie (“The Suicide Squad”), Christian Bale (“Thor: Love and Thunder”) and the singer Taylor Swift, just to name a few. Set in the 1930s, the film tells the story of three friends, played by Robbie, Bale and John David Washington (“BlacKkKlansman”), who witness a crime in which they become the main suspects.

The trio finds themselves involved in one of the most shocking plots in American history and will have to investigate the case on their own in order to protect themselves. The stellar cast still has Anya Taylor-Joy (“The Queen’s Gambit”), Michael Shannon (“Between Knives and Secrets”), Timothy Olyphant (“Santa Clarita Diet”), Zoe Saldana (“Avatar”), Rami Malek (“Bohemian Rhapsody”) and Robert DeNiro (“The Irishman”). Watch the trailer:

For fans of the Marvel Cinematic Universe, in addition to the penultimate episode of “She-Hulk: Defender of Heroes”, we will also have the franchise’s first Halloween special, “Werewolf in the Night”, which premieres on Friday (7) on Disney+.

The production brings Gael Garcia Bernal (“And Your Mother Too”) in its franchise debut and is inspired by classic horror films from the 1930s and 1940s. In the story, we meet a secret group of monster hunters, who gather at Bloodstone Temple after the death of their leader.

However, when they decide to pay tribute to the deceased, the group members find themselves against a dangerous monster. Quite different from the superhero stories we’re used to, isn’t it? Check out the trailer and, following, more premieres this week:

A mix of suspense and comedy, “Morte, Morte, Morte”, distributed by Sony Pictures in Brazil, is another feature from A24, which has stood out in 2022. In the story, a group of friends gather to “enjoy” a storm and, during a prank, one of them ends up dead, which ends up creating a sequence of misfortunes. #CineBuzzJáViu the film and you can check our review by clicking here!

Where to watch: In cinemas, starting this Thursday (06/10)

Co-written and starring Billy Eichner (“American Crime Story: Impeachment”), the romantic comedy features an LGBTQIA+ museum curator who says he’s comfortable with his singleness and doesn’t want to be in a relationship. However, everything changes when he meets a lawyer and ends up falling in love.

Where to watch: In cinemas, starting this Thursday (06/10)

Directed by Ryan Murphy (“Dahmer: An American Cannibal”) and based on a story by the master of horror Stephen King“Mr. Harrigan’s Telephone” tells the story of friendship between a young boy and an old man who have a lot in common: both are lonely and sad.

Where to watch: Now available on Netflix

starring Mila Kunis (“Black Swan”), “The Very Lucky Girl” follows the perfect life of a writer shaken by memories of her past, triggered by a crime documentary.

Where to watch: Now available for rent on Amazon Prime Video

From the creator of “The Haunting of Hill House”, “The Haunting of Bly Manor” and “Midnight Mass”, “The Midnight Club” takes place in a clinic for terminally ill teenagers. There, members of a secret club make a pact that whoever dies first must send a signal from beyond.

Where to watch: On Netflix, available in full from Friday (10/07)

Eighteen seasons is not for any series and “Grey’s Anatomy” is there to prove it: ready to win a new year in the United States, fans can now keep up to date with the episodes of season 18, which arrived on Star+ this week.

Where to watch: Now available in full on Star+

As a good series does not walk alone, the 5th season of “Station 19”, a production derived from “Grey’s Anatomy”, which focuses on the stories of a group of firefighters, also debuted a new season this week on Star+. You can double and follow the two together as characters often jump from one series to another.

Where to watch: Now available in full on Star+

“Derry Girls” features Nicola Coughlana Penelope Featherington of “Bridgerton”, and follows five teenagers, in the midst of Northern Ireland’s political conflicts in the 1990s, dealing with their own personal conflicts in search of coming of age.

Where to watch: On Netflix, available in full from Friday (10/07)

The documentary shows the backstage of the Brazilian team that won the 2002 World Cup, with unpublished images and interviews with the players.

Where to watch: Now available on Netflix

After the fiasco at the 2004 Olympics, the US men’s basketball team seeks redemption and sets out to fight for gold at the 2008 Beijing Games.

Where to watch: On Netflix, available from Friday (07/10)

In the wrong place, at the wrong time. Mountaineers only have eyes for the Everest and the Langtang Valley in Nepal. Until a natural disaster brings endless devastation to the capital of Kathmandu and its surroundings.

Where to watch: On Netflix, available from Thursday (10/06)

What was the best movie of 2022 so far? Vote for your favorite!