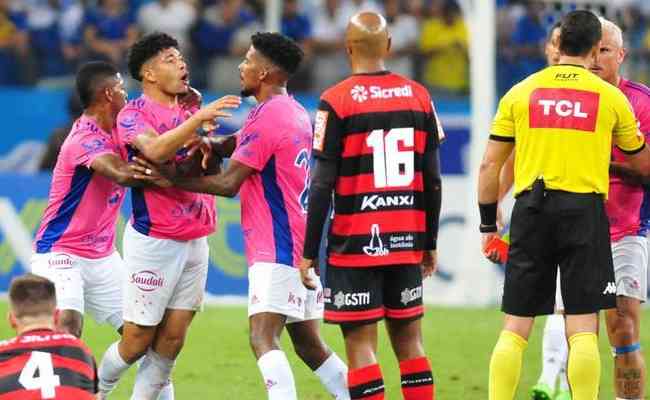 Cruzeiro: referee reports Machado’s words and anger at the time of expulsion

In the 40th minute of the second half of the game between Cruzeiro and Ituano (1-1), in Mineiro, referee Marielson Alves Silva (BA) expelled midfielder Machado. The heavenly midfielder received a first yellow card for a tough tackle on Bernardo and, for complaint, was punished again and was sent off.

On the smula, Marielson said that Machado tried to contest the refereeing with gestures and words. After the expulsion, the Cruzeiro player would have cursed the referee. In addition, he kicked a TV Globo microphone that was outside the four lines.

“I expelled athlete 23, Machado, as a result of the second yellow card, because, after committing a reckless foul and receiving a yellow card, he persisted in contesting the arbitration, complaining with gestures and words. After being expelled, this same athlete, very upset, left for over me, referee of the game, but he was restrained by his teammates. When he was leaving the field, he still uttered the following words: “Everything’s going to be fucked up, bunch of son of a bitch, they’re going to be fucked up.” (sic)”. And he also kicked the microphone of the television that was on the edge of the lawn”, said the referee.
With the expulsion, Machado will be absent from Cruzeiro in the next round. The club travels to Recife, in Pernambuco, place of the match against Sport. The duel is scheduled for 4 pm on Sunday (9), on Ilha do Retiro. Nearly 15,000 tickets have already been sold for the match as Leo still dreams of Serie A access.