Eight teams continue with mathematical chances of accessing Serie B

The promise of this being “the greatest Serie B of all time” must come true. Although in crooked ways, without the technical quality that was expected, the competition is heading towards a final stretch with emotion, and with Vasco being one of the protagonists. At the center of it all, the dispute for the three spots that are still open in Serie A in 2023.

There are eight teams with mathematical chances of access, with an eye on the three positions that remain in the G4 – Cruzeiro has already secured access and the title. Grêmio is well on its way in the fight for the second spot. Bahia, Sport, Ituano, Sampaio Corrêa, Londrina and Criciúma, in addition to Vasco, are next. Seven points separate Bahia, third placed, from Santa Catarina, in ninth.

Vasco, Ituano, Sampaio Corrêa and Londrina will play practically a quadrangular match against each other in the last five rounds that remain. The Cariocas will have four direct confrontations against teams among the seven with chances of access. The Ituano will have the same amount. Maranhenses and Paraná, three each. 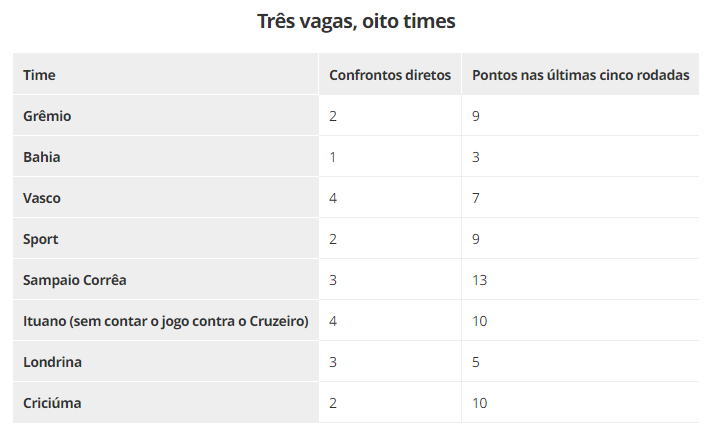 It is a double-edged sword for the quartet, which can either take direct opponents out of the dispute or be overcome by them in the famous “six-point games”. Better for Grêmio, Bahia, Sport and Criciúma, who will get more teams with the situation defined in Serie B or still involved with the fight to escape relegation. The Bahians will only visit Grêmio, which also catches Londrina. Sport and Criciúma will have two matches against rivals.

Vasco gained a breather after the victory over Operário, on Tuesday. He could have been bigger. However, with the results of the 33rd round, the match against Novorizontino, on Saturday, in São Januário, will again be under the pressure of having to win or else seeing the position in the G4 seriously threatened.

Even if it depends only on you, Vasco observes the opponents. In addition to studying the table of rivals, it is also necessary to take into account the moment that each of the seven teams lives in Serie B. Bahia is the one who is going through the most difficult phase, despite the third place. There were three draws and two defeats in the last five matches. The opposite example is Sampaio Corrêa, packed with four wins and one draw in the same cut.

Of the eight teams that still fight for places in Serie A, Vasco is one of the worst teams – they won seven points out of 15. Londrina comes even slower, with five points. Grêmio and Sport (nine) and Ituano (ten, without taking into account the match against Cruzeiro) are more packed.

Tickets for the match against Novorizontino are already sold out. In it, Vasco will have the return of Yuri Lara, who served suspension against Operário. On the other hand, Alex Teixeira, scorer of two goals in Ponta Grossa, received the third yellow card and is suspended.