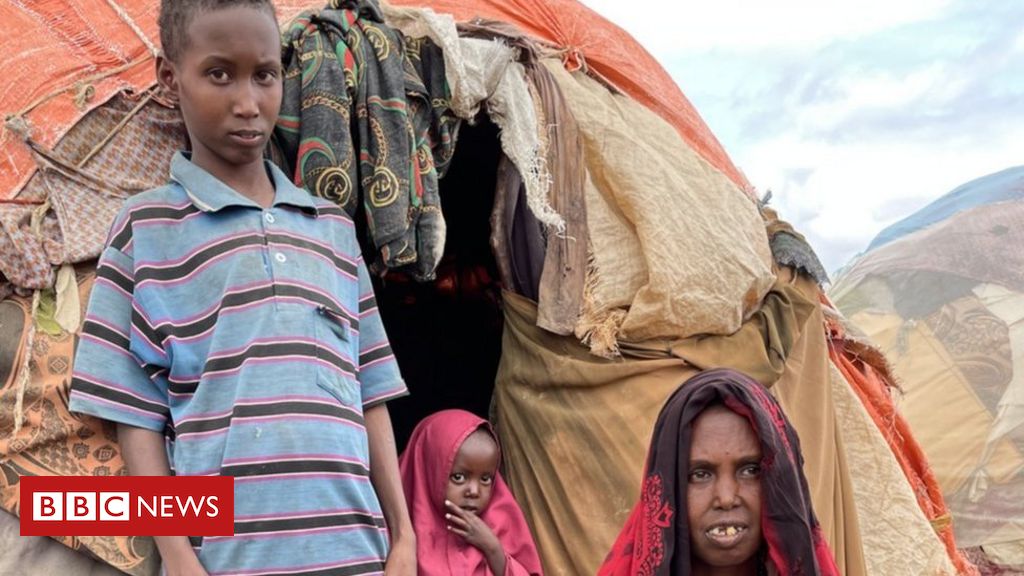 ‘I didn’t have the strength to bury my starving daughter’

An increasing number of young children are dying in Somalia amid the country’s worst drought in 40 years. Government officials say an even worse catastrophe could hit the country within days or weeks unless more help arrives.

“I just want to survive this,” he says calmly.

Sitting beside the family’s shack on the dusty plain outside the town of Baidoa, his weary mother, Fatuma Omar, tells him not to cry.

“Your tears won’t bring your brother back. Everything will be fine,” she says.

Fatuma’s second son, Salat, 10, died of starvation two weeks ago, shortly after the family arrived in Baidoa from their village, a three-day walk away.

His body is buried in the rocky earth a few feet from his new home—the grave already littered with rubbish and increasingly difficult to detect as newcomers set up camp around them.

“I can’t cry for my son. There’s no time. I need to find work and food to keep the others alive,” says Fatuma, cradling her youngest daughter, nine-month-old Bille, and turning to look at daughter Mariam, six-year-old as she gave a rough cough.

Across the dirt road that heads southeast toward the coast and Somali’s capital, Mogadishu, other displaced families told darker stories of long walks across a dry landscape in search of food.

‘Without strength to bury my daughter’

New research has shown that nearly two-thirds of children and pregnant women in camps suffer from acute malnutrition, which, along with a high death rate, could indicate that a localized declaration of hunger is already overdue.

“I saw my daughter [Farhir, de três anos] died before me and there was nothing I could do,” says Fatuma, who walked for at least 15 days with her nine children from a village called Buulo Ciir to reach Baidoa.

“I had been carrying her for 10 days. We had to leave her on the side of the road. We didn’t have the strength to bury her. We could hear the hyenas approaching”, he adds.

“I didn’t bring anything with me. There’s nothing left at home. The cattle are dead. The fields are dry,” says 50-year-old Habiba Mohamud, holding a piece of string in his hand and lamenting that he will never return to his village.

A succession of droughts, fueled by climate change, now threatens to end a centuries-old pastoral way of life across the Horn of Africa.

Like other newcomers, Habiba was busy building a shack for her family out of twigs and pieces of cardboard and plastic, hoping to finish it before the cold of night. Only after that could she seek food and medical help for some of her five children.

In the ward of the city’s main hospital, Dr. Abdullahi Yussuf moves between the beds, checking on his tiny, thin patients. Children between two months and three years of age are the majority.

All are severely malnourished. Some had pneumonia and many were also battling a new measles outbreak.

Few children have the strength to cry. Several have badly damaged skin, broken by the swelling that sometimes accompanies the most extreme cases of hunger.

“Many die before they even get to the hospital,” says Abdullahi, watching his team struggle to connect an IV tube to the arm of a groaning two-year-old.

Although Somali officials and international organizations have been warning for months of impending famine in this southwestern region, Abdullahi said his hospital is already short of basic items, including nutritional supplements for children.

“Sometimes we don’t have supplies. It’s scary actually because people are dying and we can’t help them. Our local government isn’t handling it well. It’s not planning how to alleviate the drought or deal with the arrival of displaced families. “, he says, with visible frustration.

A local government minister admitted that there were flaws.

“We need to be faster than we are and we need to be accurate… and more effective,” says Nasir Arush, Minister of Humanitarian Affairs for the Southwest state, on a short visit to one of the camps around Baidoa. But more international support, he insists, was critical.

“If we don’t get the help we need, hundreds of thousands of people will die. The things we’re doing now we needed to do three months ago. In fact, we’re behind schedule. Unless something happens [rápido] I think something catastrophic is going to happen in this area,” he says.

The formal hunger declaration process can be complicated, depending on hard-to-define data and often political considerations.

UK Ambassador to Somalia Kate Foster describes this statement as “essentially a technical process”. She points out that during the 2011 drought “half of the 260,000 deaths occurred before the famine was declared.”

The presidential envoy leading Somalia’s international effort to secure more funding thanked the US government in particular for the recent new funding, saying it “gave us hope”.

But Abdirahman Abdishakur warns that without further help, a crisis located in one part of Somalia could quickly spiral out of control.

“We were raising the alarm… but the response from the international community was not adequate,” says Abdishakur.

“Hunger is predicted. It happens [já] in some places, some pockets, in Somalia, but we can still avoid a catastrophe,” he adds, speaking by phone during a stopover in Toronto, Canada.

While estimates vary, Baidoa’s population has nearly quadrupled in recent months to around 800,000 people.

And any visitor will quickly notice a striking fact: almost all of the adult newcomers are women.

Somalia is at war. The conflict has continued, in different forms, since the central government collapsed three decades ago, and it continues to affect almost every part of the country, separating men from their families to fight for a range of armed groups.

“Even now I’m getting calls on my phone from the rest of my family. There are conflicts there — between the government and Al-Shabab. My relatives have fled and are hiding in the forest,” she says, sitting next to her sick son in a small hospital in Baidoa.

Other women speak of older husbands and children prevented from leaving areas controlled by the militants and of years of extortion by the group.

Baidoa itself is not entirely surrounded by al-Shabab, but it remains a precarious place of refuge. International aid organizations and foreign journalists need a lot of security to get around, and any travel beyond the city limits is considered extremely risky.

“We are looking at populations that are under siege. Sometimes we feel hopeless,” says Charles Nzuki, head of UNICEF, the UN’s children’s arm, in central and southern Somalia.

By some estimates, more than half of the population affected by the current drought remains in areas controlled by al-Shabab. Strict US government rules that prevent any assistance being sent to areas controlled by designated terrorist groups complicate efforts to reach many desperate communities.

But international organizations and Somali authorities are working with smaller local partners to increase access and are now planning airdrops in some contested territories.

Still, one aid worker, speaking in secrecy, acknowledges that it is nearly impossible to ensure that no food or money reaches al-Shabab.

“Let’s not be naive, [al-Shabab] taxes everything, even cash donations”, he says.

Over the years, the militant group has established a reputation not only for violence and intimidation, but also for delivering justice in a country steeped in corruption.

In at least four villages near Baidoa, al-Shabab runs a network of Sharia (Islamic religious law) courts that are routinely used by townspeople and, reportedly, people in Mogadishu and beyond, to settle commercial and Earth.

Further to the northeast, a sudden uprising against al-Shabab has seen local communities and clan militias — now heavily supported by the central government — expel the group from dozens of towns and villages in recent weeks.

The military successes have sparked a wave of optimism, but it is unclear whether this will help the fight against hunger or simply distract the Somali government.

“May or may not [ajudar]. I think it can create more displacement [civil]. Or the government can free up more areas and people can have more access [à ajuda] everywhere,” says local minister Nasir Arush.

In Baidoa itself — a bustling city of narrow, cobblestone streets scarred by decades of conflict and neglect — prices for basic goods like rice have doubled in the past month. Many residents blamed the drought, but others see other reasons for it.

“Flour, sugar, oil — they all increased at the same rate. Sometimes we have to skip meals. I’ve heard about the war between Russia and Ukraine. People say that’s the root of these problems,” said Shukri Moalim Ali, 38. years, walking to his dry well and barren vegetable garden.

While the fight to prevent deepening famine is the immediate focus in this region, Somali’s new government is also looking to the future.

“We have a young population, a huge diaspora and vibrant entrepreneurial skills. It gives us hope. It’s challenging, but we have no alternative.”

Previous Recycled? Apple A16 Bionic from iPhone 14 Pro just an improved A15, says analyst
Next In partnership with Festival do Rio, Telecine presents a session of ‘O Contador de Cartas” – TELA VIVA News