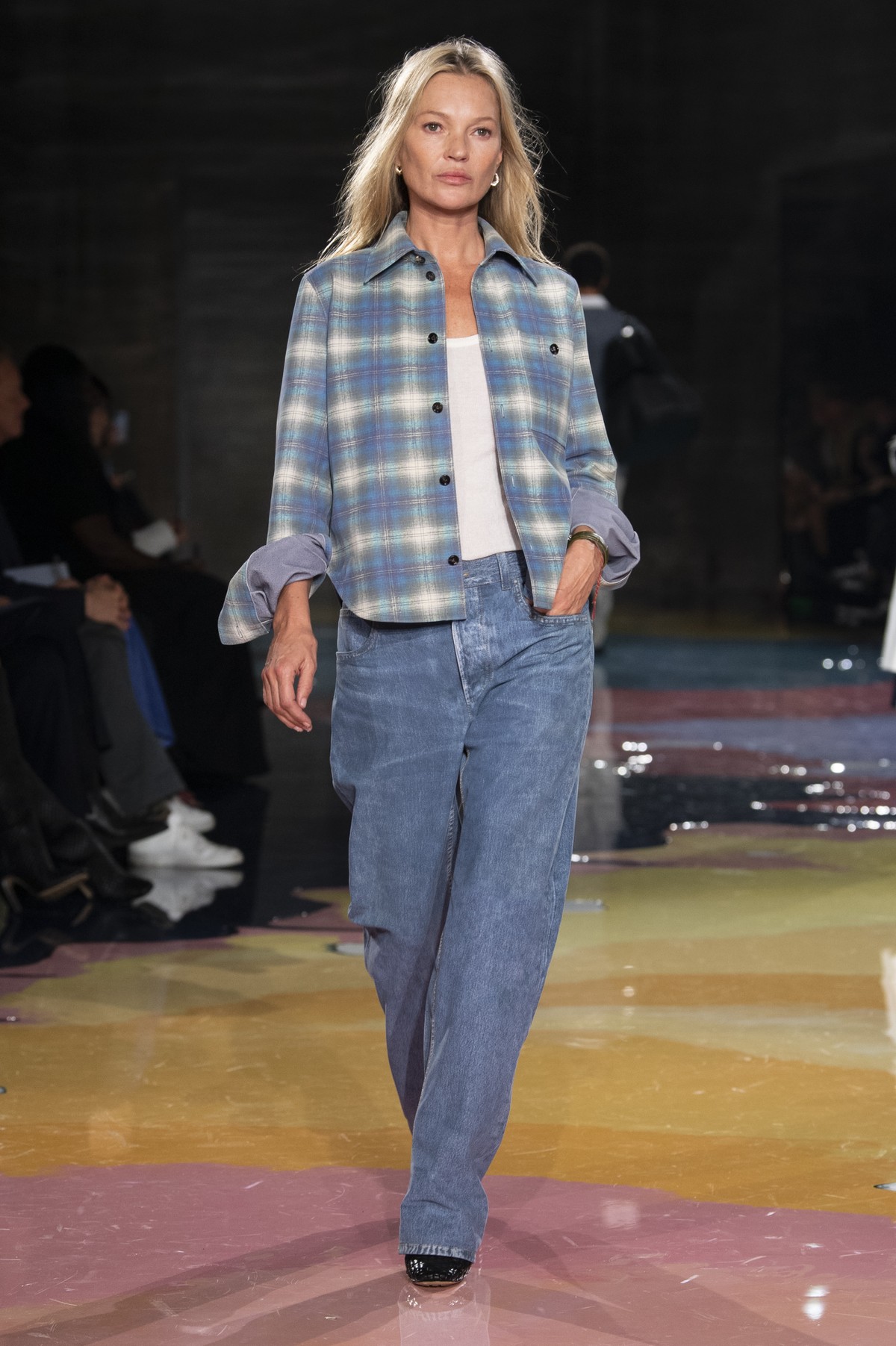 The 15 Most Viral Moments of Fashion Month | Fashion

During a season that saw condoms used as gloves, Kim Kardashian moonlighting as a designer and Paris Hilton modeling on the runway, nothing was surprising. Summer 2023 was busy – here are the fashion moments that most marked the month of September.

Kate Moss wore the best (leather) jeans of all time

Given the sheer volume of dresses on display in Milan throughout the month of September, no one expected the standout look of summer 2023 to be jeans with a plaid shirt. And no one expected Kate Moss to walk the runway at Bottega Veneta wearing just that, with an equally basic white tank top underneath — as if a ’90s Alicia Silverstone had been ripped out of an Aerosmith music video and placed on a Milan runway. The real twist? Kate’s entire look was leather.

Moschino directed us an inflatable play

A surprise inspiration for Jeremy Scott? Britain’s Conservative Chancellor Kwasi Kwarteng. In a nod to the market inflation that is dominating news feeds, Moschino’s creative director sent models wearing inflatable pieces to the catwalks. Glamorous jackets inspired by lifeboats, hats made from rubber rings, bracelets like heart-shaped armbands and long inflatable dolphin gloves in rainbow colors were some of the offering. At a time when we’re all looking for something to keep us steady, Scott’s mood was particularly uplifting.

Kim wasn’t the only reality TV queen to hit Milan this season. Paris Hilton (who, for the record, hired a then-unknown Kardashian as her assistant when she went wild in the Bible Belt with Nicole Richie in The Simple Life) closed the Versace show wearing a tiny pink sequin number that didn’t differ much from her infamous 21st birthday dress. In 2002, luxury brands weren’t exactly knocking on the heiress’ door. Donatella’s endorsement is just the latest stage of her metamorphosis from risqué party girl to pop culture icon.

Botter’s condom gloves were an ode to our oceans

What better way to emphasize the dangers facing our oceans than with eye-catching condom gloves filled with blue water? That’s exactly what Botter designers Lisi Herrebrugh and Rushemy Botter did during the summer 2023 show, which sought to bring “water to the catwalk”. Along with dresses made from seaweed and consumable water bubbles (made from algae and plants) that were served to guests as an alternative to plastic, it’s fair to say Botter’s idea was well conceived.

Chopova Lowena made a joyous – and inclusive – London debut

How to celebrate your community? Invite your collaborators to model in your debut show. Mahoro Seward, fashion resources editor at iD Magazine; Georgia Kemball, London-based jewelry designer; and stylist Louise Gray were some of the people who crossed the runway at Chopova Lowena this season. “We wanted everyone to channel a fast, competitive show,” co-founder Emma Chopova said of the guidelines given to the “models”. All packed with a soundtrack that mixed thrash metal, lacrosse players and a Bulgarian choir.

Linda Evangelista closed out the celebration Fendi staged in New York to celebrate Baguette by wearing a majestic turquoise cape befitting her return to fashion and serving as a reminder that she is one of the industry’s eternal icons. Silvia Venturini Fendi praised the chameleonic and timeless quality of the it-bag on its 25th anniversary, but she could just as easily have been talking about Evangelista. 2022 marks a new era for the supermodel and, judging by the rapturous applause at the end of the show, everyone agrees.

Coperni made history with Bella Hadid

Coperni ended its show with the best futuristic range of the season. Bella Hadid made her entrance wearing nothing but nude underwear, and then a team of experts sprayed a minimalist dress directly onto her body. It’s all thanks to a partnership with Fabrican, a company created by Dr. Manel Torres who develops patented spray materials from cans that solidify into wearable fabrics. The performance went so viral and the fashion crowd spent days talking about it.

While Britain was still absorbing the news of Queen Elizabeth’s death, Richard Quinn sent no less than 22 models down the catwalk wearing looks inspired by the monarch. Coming from Quinn, who dedicated the entire collection to the Queen, this was a particularly moving tribute. Four years earlier she presented the designer with the inaugural Queen Elizabeth II Award for British Design and attended her show during London Fashion Week.

Gucci creative director Alessandro Michele surprised the audience with an unforgettable show finale that revealed there were 68 sets of identical twins sharing the runway. The aptly named “Twinburg” show was a tribute to the special bond between his mother Eralda and his twin sister Giuliana, whom he also refers to as his mother. “Two extraordinary women who made their twins the final seal of their existence,” he said in the parade notes. “It is precisely the impossibility of the perfectly identical that nourishes the twins’ magic.”

Hats off to the PR who planned the front row seats for the Michael Kors show this season. With a genius pop culture flair, Anne Hathaway sat next to Anna Wintour, sending the internet into a frenzy of delicious Devil Wears Prada memes. The news didn’t go unnoticed by Hathaway, who wore a brown leather look that Andy could envy Emily for in her favorite movie of the 2000s. We can think of dozens of lines to write, but the images speak for themselves.

JW Anderson and his self-reflective style

Let the concept king encourage an existential moment. Speaking to a number of journalists Anderson likened the experience of watching a parade to an “alternative reality” – a tribal experience not unlike communities cultivated online through gaming. The symbol of self-reflection on the catwalk? A bulbous minidress made of a convex reflective dome – like a car mirror or a pair of sunglasses – that reflected an image of the audience back to itself, assimilating them to the collection.

Emily Ratajkowski is well used to walking on the catwalks of New York, Paris and Milan, but this season it was in London that the model shone. A day after participating in JW Anderson’s video game-themed show, casting director Piergiorgio Del Moro added her to the Nensi Dojaka lineup. EmRata seemed right at home alongside the likes of Jill Kortleve, Paloma Elsesser and Sacha Quenby.

Cher made a closing at Balmain

Cher’s appearance on the Balmain runway may have been the most surprising moment of Paris Fashion Week. The mesmerizing 76-year-old pop legend closed the show – which featured 112 looks, including menswear and couture – wearing a spandex jumpsuit with high shoulders and a plunging neckline, as well as dangerously high platforms.

Goodbye Barbie Kim alien from Balenciaga! Stunning Ciao Kim from Bellucci! Curated by Kardashian – don’t call it a collaboration! – from the Dolce & Gabbana Summer 2023 collection would always be complete, but few managed to prepare for the Pomodoro pasta roll that unfolded in Milan. In a complete about-face of her Kanye-curated futuristic aesthetic, the businesswoman made the Fellini-style femme fatale by delving into the brand’s archives. How long will this style phase last? Never ask a reality star for her secrets!

Vogue World was an urban party that put some of the world’s most notable talent on the runway and dancing. Serena Williams wearing a silver cape customized by Balenciaga; Lil Nas X singing “Industry Baby” and supermodels like Irina Shayk to Imaan Hammam wearing winter 2022 looks were some of the surprises. But it didn’t stop there, Gucci Osteria served delicious cookies, while Michael Kors and Katz’s Deli offered pastrami sandwiches.

Previous Why did the US fail to predict Russian military failure in Ukraine? – Ground Forces
Next After MP’s recommendation, game between Goiás and Corinthians will have a single crowd | Brazilian series a